Egypt’s rich food culture tends to be undervalued internationally. The diversity of cultures within the country has created a cocktail of traditional recipes, each one representing a certain region and stemming from a local culture: from the Sinai Bedouin tribes and their plethora of indigenous herbs, from the Bedouins of the Western Oasis, famous for their rice cultivation, or from the Berber tribe in Siwa, specialists in olives and dates. In short, Egypt is brimming with culinary gems.

From the oases to the Nile delta
The country is also home to a culture of coffee, which is drunk spiced by the Ababda and Bishari tribes, while along the Nile, in the urban areas that have developed in the river delta, the gastronomic culture has a more Mediterranean feel. In Upper Egypt, the rural culture has inspired many national gastronomical treasures such as Nubian dried vegetables, karkadé (hibiscus tea) and the famous molokheya, the bitter and highly nutritious leaves of a plant from the mallow family, used to make a soup of the same name. Port Said has a traditional Mediterranean fish and seafood culture, though ecosystem pollution is leading to decreased production and bringing risks to consumer health. The diversity of Egypt can especially be seen in its various breads: Bedouins in Sinai eat libba (sand-cooked bread), the Ababda and Bishari tribes have a similar bread called jubrit (Siwa date fermented bread) and the Nubians have shamsi. 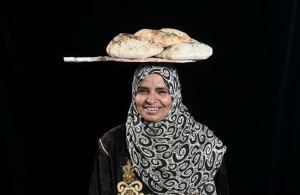 With such a diverse gastronomic landscape, the task of mapping typical local products is challenging but also fascinating. To help with the process, Slow Food has enlisted the help of local associations and businesses, like Ma7sool Productions, which is producing short videos and documentaries as part of the mapping.

Slow Food also collaborates with Nawaya, an initiative started by a group of young Egyptians committed to defending small-scale, sustainable agriculture. The group has decided to create an innovative platform to inspire farmers to adopt sustainable practices. The idea is simple, and based on the fact that farmers will not be motivated to adopt better practices unless they have a chance to try them out first. Nawaya gives them this chance, allowing them to choose what to grow and how, while preserving their land and the environment. It is also collaborating with academics and scientists who can contribute their experience and help analyze the results obtained so far.

The ultimate goal is to raise awareness about the richness of Egypt’s food culture, which deserves to be recognized internationally. The hope is that thanks to this mapping, one day the people of Egypt will reappropriate an awareness of their own gastronomic heritage, a treasure trove that includes the rice of the Western Oasis, traditionally used to prepare sekouti (rice marinated with the juice of burnt onions, giving it a brown color), honey and indigenous herbs from the Sinai, karkadé and mustard seed oil… The mapping of biodiversity and typical local products is a first, important step in giving back local food the place it deserves, on our tables and, at a deeper level, in our consciousness.