Archive » Doha, a Palestinian Farmer Weaving Herself a Network of Solidarity

There is a simple—and most importantly effective—response to hardships, injustices and abuses of power. It is called mutual assistance, or solidarity. You can see it in the Terra Madre communities, nodes in a network that treats food and sharing as the starting point for a new paradigm, a new social model. And you can see it in the many spontaneous initiatives that spring up, often out of necessity, and become nodes in that same network and multipliers of these actions. One of these nodes is Doha Asoos Mona, a farmer who lives in Palestine, in the West Bank. She has opened her home to the world and managed to weave together an international network of volunteers who give heart, hope and most of all help to Palestinian farmers.

Her character shines through immediately. Her expression is frank and sincere, kind but determined. There is little to reveal the challenges that this otherwise normal woman, mother and farmer must face every day. Meeting her was an honor, as it is an honor to tell you her story. 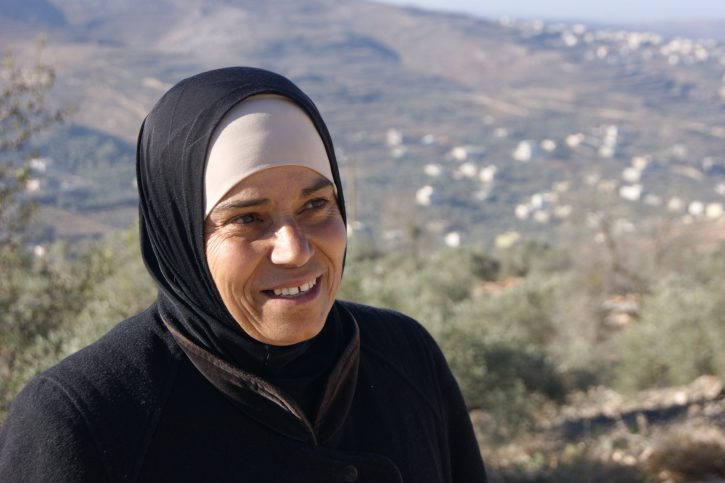 Doha lives with her family in Burin, a rural village of 3,000 souls huddled close to Nablus in the West Bank, set in a valley, as tradition dictates, and surrounded by arid hills dotted with olive trees. These hills, however, have been taken over by Israelis and Burin is now surrounded by settlements. All the same, Doha wanted to return here after some years spent in Baghdad. “My husband is a teacher in our elementary school. But like most of the Burin inhabitants, we cultivate the land and raise animals. I take care of that, along with my children, and with the help of some other local farmers,” Doha tells me. “My family has been growing olive trees for generations. A few years ago we were able to expand the business, buying some more olive trees from the Jordanian government, thanks to projects in support of local agriculture. We also grow thyme, the base for za’atar, a mix of thyme, toasted sesame and sumac that is used in traditional dishes or just served simply with bread and oil. We have planted some fruit trees and we raise 40 chickens.” All this means that Doha’s family, like many other farming families here, is self-sufficient: olives, oil, wheat and everything else that they need for themselves and the animals on their farm. What little is left over is sold at the local market.

Doha takes evident pride in her work, but she cannot hide the problems she faces. Here the challenges go beyond the usual troublemaking bureaucracy and disrupted climate that farmers around the world must contend with. The on-going conflict here has hit farmers particularly hard, as they struggle to survive with the dignity they deserve due to the strict Israeli military occupation and the proliferation of illegal settlements. “Some of our land lies within zones declared Area C after the Oslo Agreements, under Israeli administrative and military control. To cultivate the land we are forced to ask permission from the Israeli administration, which often refuses it, or grants it very late. Often we have to abandon our work because the army arrives to tell us our time has run out. The young people of Burin who keep working despite the ban are arrested, as recently happened to one of our neighbors.”

And then there are the difficult relationships with the settlers. Close to Burin are two outposts, illegal settlements that were started with the purpose of growing and forcing the Israeli authorities to accept their existence. “During the 2015 harvest the settlers set fire to our plants,” recounts Doha, “and while we were trying to put out the fire a settler hit an English friend of ours in the head with a rock.” But Doha is not one to give up. Her reaction to these challenges was to roll up her sleeves and set about putting together what has now become a solid network. She tells me: “I coordinate the activity of international volunteers who come to help us with the harvest. Their presence is essential to us: as well as their practical help, they also give us courage,” while, hopefully, discouraging the aggressions of the settlers. This is why Doha has opened her home, welcoming and bringing together volunteers at her table, over meals that recall those during the grape harvests in Italy or France, when family and friends share hard work and convivial pleasures. A seed that we hope will produce a rich harvest of fruit.

This year Doha will once again be in Turin from September 20 to 24 for Terra Madre Salone del Gusto.

For information on how to volunteer in Palestine, contact www.zaytoun.org