Archive » Dave Goulson: “Financially Vulnerable People Will not be Able to Afford Healthy Diets if the Pollinators Continue to Follow the Current Extinction Rate”

Bees and other pollinators are essential for our livelihoods. 90% of the globally produced food relies on bee-pollination. Without pollinators, our diet would be poor, based on rice, grain, maize, and only very few fruits and vegetables. However, for the past few decades, we have been witnessing a violent loss of wild pollinators and the honeybee colonies across the world.

Slow Food has been among 100 European civil society organizations, advocating for political changes concerning European agriculture and its impact on biodiversity. With the European Citizens’ Initiative “Save Bees and Farmers” organizations aim to collect 1 million signatures to be able to call on the European Commission to introduce legal proposals to phase out synthetic pesticides, restore biodiversity and support farmers in the transition.

Last week, we asked our followers on social media to post questions that they had about bees and the importance to save them. Professor of biology Dave Goulson from the University of Sussex, who specializes in ecology and conservation of insects shares his answers to several of your questions.

What is your favorite food? And would it be possible to produce this without bees?

I love so many foods, but the first one to come to mind was chocolate. Cacao does not need bees to set fruit, but it does need pollination by tiny flies.

Which are the species we are most reliant on for what concerns our food production?

The most important pollinators of crops include honeybees, wild bumblebees, and some of the more common solitary bees such as mason bees. But all pollinators have a role to play, including butterflies, moths, wasps, beetles and flies. Research has found that pollination of crops is more reliable if a diversity of different pollinating species is present, so we should look after all of them.

What kind of flowers can I plant at home to help bees? Would planting flowers in my balcony actually help?

My new book, and my Youtube channel,  provide a lot of ideas. There are great plants suitable for pots on a balcony – try marjoram, sage, chives and thyme, all useful for cooking too. If you have a garden, start with easy-to-grow plants such as catmint, lavender, borage, and Californian poppy. But there are many, many more!

What can we, as citizens, do to help bees to repopulate?

Does eating honey from sustainable farms help? What kind of questions can we ask bee producers to find out if they are really sustainable? Increased price and stickers don’t really cut it for me.

I love honey, and try to buy organic honey when I can find it. Unfortunately, keeping honey bees does have impacts on native pollinators, via competition for food and also by acting as a source of disease. You might ask them where they keep their bees; I do not think honey bees should be kept on nature reserves, which should be for wild bee species.

Which countries face the highest bee extinction rates? What about Europe?

We only have data for North America and Europe, where many wild bees are in decline and some have become extinct. Even in these continents, there are many species for which we have few data. It would be a good guess that bees in tropical forests have been hugely impacted by deforestation, but there is no monitoring of their numbers.

What are the biggest threats these species face?

What will happen if pollinators follow the current extinction rate in the next decades?

We are very likely to see crop yields falling, for insect pollinated crops, which include ~75% of all crop types. That will push up prices, and make it harder for poorer people to afford a healthy diet. There will also be impacts on wild plants, which of course also need pollination.

What would you recommend decision-makers do to counteract pollinators’ decline?

Move away from subsidizing and supporting industrial farming of commodity crops such as wheat and oilseed rape, toward a focus on small, sustainable farming systems aimed at producing healthy, seasonal food primarily for local markets. Systems such as permaculture, agroforestry and biodynamic farming appear able to combine  biodiversity protection and food production.

What is the difference between synthetic and natural pesticides?

What are neonicotinoids and why are they sometimes referred to as “bee killers”?

I could write a long essay on this! But, briefly, these insecticides are phenomenally toxic to bees. Five grams is enough to kill one and a quarter billion honeybees, and we apply hundreds of tons of them to landscapes. They are systemic, permeating plants and getting into nectar and pollen. They are also persistent, lasting for years in soils and woody plants. However, we should not think that they are the only harmful pesticides! They are currently being replaced in Europe by new chemicals that seem similarly harmful. We need to learn a lesson, not just keep replacing one pesticide with another.

What is Integrated Pesticide Management (IPM) and how effective is it?

IPM is really a philosophy rather than a specific practice. It treats the pesticide as a last resort, using a range of other techniques to reduce the pest population; resistant crops, crop rotations, trap crops, encouraging natural enemies and so on.  Different techniques work best in different crops. Only when all of these fails are the pesticide used. There is widespread agreement that every farmer should be using IPM, but sadly very few are.

Why do you think so many (European) farmers use synthetic pesticides, what are the ways in which farmers can reduce the risk posed by pesticides?

Farming has become very focused on maximizing yield, when in fact long-term sustainability and environmental health should come first. Pesticide companies encourage farmers to use more and more of their products, using marketing pressure, and by employing agronomists who often work on commission. In the UK, each field is treated with pesticides on average just over 17 times per year, nearly twice the number used in 1990. Pesticide companies are doing very well financially, but at the expense of human and environmental health

Should all synthetic pesticides be banned? Or will we always need some?

I would ban them all. With a little imagination, we could comfortably feed the world without them; right now, we grow about 3 times as much food as we need to feed everybody, but 1/3 is wasted, and about 1/3 is fed to livestock. The third that remains is most used to produce highly processed foods that are bad for us. Our current food production system is broken, and our planet is paying a heavy price. 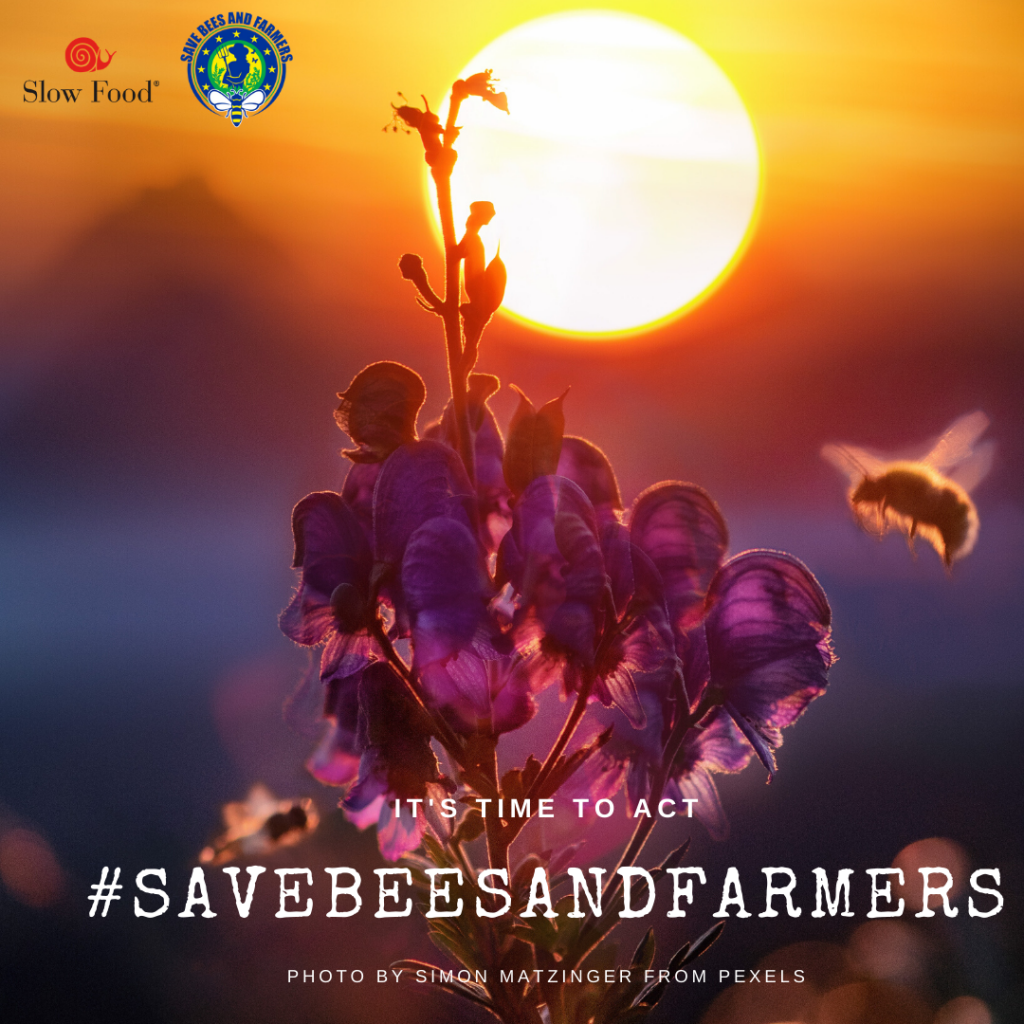 You can support the European Citizens’ Initiative and help #SaveBeesandFarmers by signing the Europe-wide petition, here