Archive » DANIEL MALDONADO: BRINGING NEW PLATES TO THE TABLE IN A MEGADIVERSE COUNTRY

When we talk of Ecuadorian gastronomy, we probably don’t have the same immediate images and associations in our minds as when we talk about Mexican or Peruvian cuisine.

Yet Ecuador’s food culture stretches back thousands of years to the Valdivia culture, who were already cultivating maize, kidney beans, squash, cassava and chili peppers long before the Inca arrived, let alone the Spanish! Until recently, there wasn’t much to speak of in Ecuador in terms of high-quality cuisine with an innovative approach to local products, but that’s all changing now. Enter Daniel Maldonado, a young and passionate chef who’s leading the charge of a culinary renaissance through his two restaurants, URKO in the capital Quito, and ANKER in the Galapagos.

When. why and how did you embark on this journey, Daniel?

“URKO started four years ago in 2015. After living and traveling in Europe for a while, I understood the importance of creating a space where gastronomy recounts the history of our culture, traditions and identity. There was nowhere that talked about or used Ecuadorean products, flavors or ancestral recipes in contemporary cuisine. Now with URKO we aim to raise awareness of the value of Ecuadorian products. We ‘re a team of young and passionate cooks who want to transform our country through cooking. Ecuador, with its four regions—the Andes, the Pacific Coast, the Amazon and the Galapagos—is one of the planet’s megadiverse countries, and this is reflected in the products that we present in the restaurant, respecting their places of origin and the hands that make them. We also have an urban garden based on permaculture that provides a green space in the city and supplies the restaurant.

In 2017 we started a new project, ANKER mar to table, through which we’ve been able to learn more about and make an impact on the Galapagos islands. Our aim is to create a new cuisine that uses only products from the islands. We work directly with the local fishing community and agroecological farms, allowing for close contact with the product and its environment, and the best possible supply chain traceability. The impact this year has been enormous: we’ve raised awareness among the local population of the importance of eating local products and supporting the community that produces them, taking into account the environmental and social impact that transporting food from the continent entails.”

In Europe we mainly know the Galapagos for its eponymous turtle. But we know little of its food. What you can tell us?

“The Galapagos islands are a unique place in the world, a national park and biosphere reserve for the conservation of its countless endemic species. The islands are famous for leading to Charles Darwin’s theory of evolution after he visited in 1835. As well as being a national park, the Galapagos are also a marine reserve, and were declared a Natural Heritage of for Humanity by UNESCO in 1979 for its cultural and ecological value. The islands have been the site of many zoological investigations and new marine species continue to be discovered in the reserve.

There is no truly native gastronomic culture despite the diversity of marine species, waves of migration, the presence of a military base and a prison—the islands were uninhabited before European contact. Nevertheless, there’s a wide range of seasonal fish who come and go depending on the time of year. There are lots of species at risk too, like the sea cucumbers—which are prohibited—the seasonal lobsters, and the sharks which are hunted for their fins.

There are many species of high quality like cod, tuna, wahoo, scorpionfish, Galapagos shrimp, dolphinfish, swordfish, etc. The fishing process is in theory tightly-regulated for export to the continent but there are problems of corruption that damage the implementation of these regulations. Within the islands there are people and cooperatives whose job it is to control fishing, but they don’t always do it in the most responsible way. All products have their guidelines, seasons and sizes for extraction, but they’re not always respected. Tourist consumption is very high, and local production can’t satisfy demand. Irresponsible management of incoming products and wastage has a big impact. However, there is legislation that protects the resources of the national park which operates to the highest standards.

The Galapagos are a marvelous and diverse place with a feel of paradise. Being an archipelago it’s a special environment, where differences are found even between the islands, each of which has a different species of tortoise that has adapted and evolved according to its conditions. For this reason, when the islands were discovered, they were named the Galapagos, which means tortoises.”

Why is it important to defend the sea?

“The sea is an unknown world that we cannot see, we don’t know exactly what impact our exploitation has on it. I believe we’re at a critical point, we need to take global measures to protect the sea and its diversity. It’s very important to inform ourselves about the level of consumption and exploitation we’re witnessing. While demand is already too high, we must take into account the levels of misuse and waste we’re responsible for. I am very critical of the developed countries that demand these products without thinking of their impact, like China, where prohibited products are widely sold on the black market.

In Ecuador the most urgent cases are the sea cucumber and the shark. We know that the economic impact of a shark in the sea is 30 times greater than if its caught and sold. They’re worth more alive than dead! The diversity of the sea is immense, it’s a world we can’t adequately describe and it’s the axis which maintains the balance of nature for the whole planet. Protecting the sea isn’t just responsible consumption of its products, but also not polluting it. Gastronomy is and has to be an important influence which pushes us to improve our behavior toward the sea.”

What does Slow Food mean to you?

“Slow Food is a way of going about your daily life centered on responsible eating. I’m convinced that through food we can solve the problems of our planet. The Slow Food philosophy holds up many of the pillars and tools we need to implement the changes we need. It’s a network of collaboration which can transform our environment: a simple constructive union between people, projects and businesses to seek the same goal. We must work as a community in everything, this is the most important thing I’ve learned. People who live in very different circumstances can work towards a common objective. At URKO and ANKER we work to build a community between our suppliers, clients, team and environment so we can all be aware of our activities, our impact and our responsibilities.” 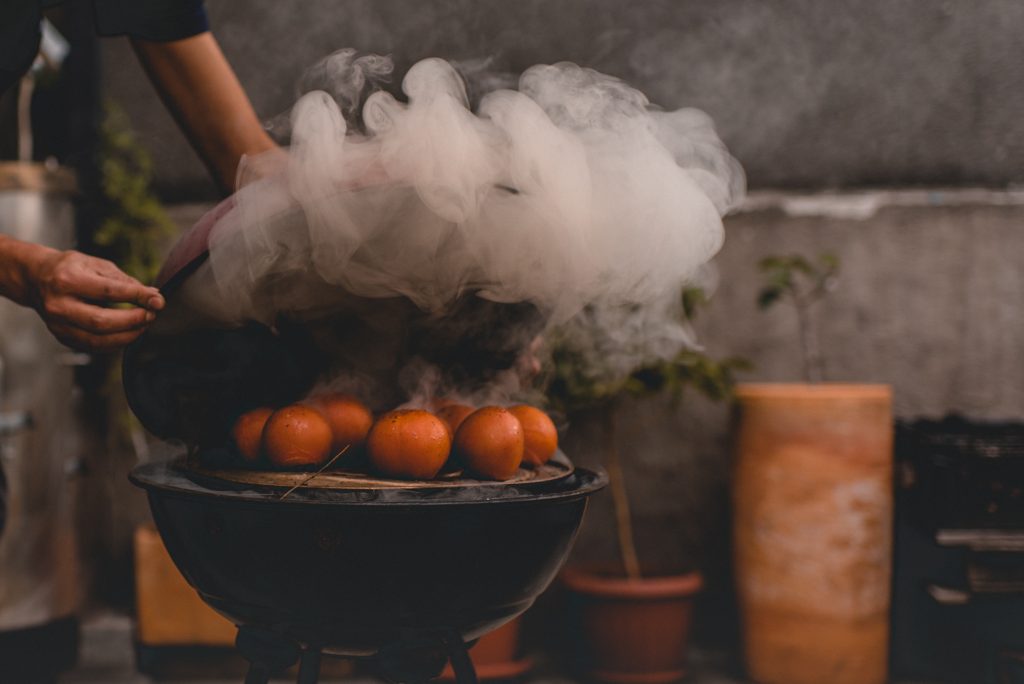 “This dinner with Karla Enciso unites two cultures and tells a story through its dishes. How we see our products and their relevance to our identity. We’re going to base the menu on sea products that transmit this message of diversity. It’s a reflection of who we are where we come from. We’ll bring lots of products from Ecuador that cannot be found elsewhere, many of which are Slow Food Presidia or in the process of becoming Presidia. It’s interesting to meet like this in the kitchen to share our culture and philosophy. We’d like to get the message across to our public that it’s important to feel part of a community and that food can awaken this feeling. And of course, it will be delicious: I’m sure you’ll want to visit Ecuador soon!”