Archive » Cuisine Under the Influence of Rembrandt

Since 2013, the Rijksmuseum in Amsterdam has been home to a new type of art, made in the kitchen of the museum restaurant and inspired by Dutch culture, history, and the masterpieces within the museum walls.

The national museum showcases significant works of Dutch art from the Dark Ages onwards as well as important objects from the rest of Europe and Asia. Originally designed by Pierre Cuypers and inaugurated in 1885, in 2013 it reopened its doors after a massive ten-year renovation.

Under the museum’s monumental overpass, you can now find its new restaurant, RIJKS. The chefs were asked to craft a menu that showcases Dutch culture as much as the museum. At RIJKS, each dish is based on a Dutch product and garnishes are influenced by Dutch history. This means that the products used are either inspired by traditional dishes or use elements based on historical ties with different cultures, such as the elaborate spice trade of the 1600s.

A great example from the menu is the play on the classic Dutch dish, witlof met ham en kaas, made with chicory, ham and cheese. Notorious as a traumatic eating experience from times past, as the Dutch had a habit of overcooking their vegetables, RIJKS’ version contains a centerpiece of roasted and glazed chicory with its root (normally discarded), which in the hands of the skilled chefs, becomes a beautiful, hearty part of the dish. The traditional ham and cheese come in the form of a piece of juicy procureur (pig’s neck from the Helder breed) and a cheese sauce. RIJKS’ dishes move with the seasons and come spring, the pork will be replaced by neck of lamb. For a new topping, the cheese will be replaced by Korma, a spicy Indian sauce.

Chef de Cuisine Jos Timmer talked about how new dishes are created. “We build every dish around a couple of guiding principles. The base is always a Dutch product, the garnishes are influenced by Dutch traditions or historical relations, and there needs to be culinary technique represented.”

The second requirement is the hardest, Timmer says, so the chefs have their recipes judged by culinary historian Lizette Kruyff who evaluates if the products do in fact fit a cultural and historic perspective. “Sometimes this is tough as it may mean certain products that work perfectly well taste-wise don’t fit the bigger picture of the menu. But mostly, it presents interesting alternatives we hadn’t thought about. For instance, we replaced puffed quinoa with buckwheat, which works out great… We’ve recently been working on a new lobster dish, which is inspired by an old recipe Lizette found using El Andalouz spices.” 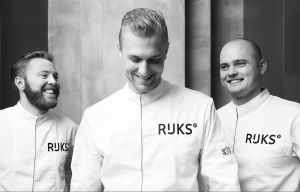 The works themselves also influence the way things end up on the plate, even if it’s not always mentioned on the menu. For instance, one of the dishes on the menu was made with a powder on the plate, mimicking the way the Dutch master painter Johannes Vermeer used light in his paintings. To allow for this inspiration, the whole kitchen staff regularly takes full-day tours of the museum.

International guest chefs are also frequently invited to RIJKS. Based on new collections, every few months a renowned chef will come and cook in the restaurant and their dishes stay on the menu for a limited time after they return home. This leads to interesting new ideas for the restaurant’s own chefs, as the guests bring new ingredients with them. Fusing these novel flavors with the best Dutch products captures the essence of the museum and remains one of the chefs’ greatest joys. “But the best thing is showcasing the beauty of our culinary landscape in the most beautiful place in Amsterdam,” says Timmer. Come and find out what he’s talking about!

RIJKS is one of the 46 establishments in the Netherlands that are part of the Slow Food Chefs’ Alliance project. The Dutch chefs, together with hundreds of Italian, Moroccan, Mexican and Albanian chefs, use Presidia and Ark of Taste products and local produce, thereby supporting small-scale producers who are the custodians of biodiversity.