Archive » Crazy for avocados: but what does it take to get them onto our plates?

If your local bakery-café doesn’t have at least one sandwich that features avocado, it might not survive very long. What self-respecting fusion restaurant in any large post-industrial city doesn’t offer guacamole as a standard side dish in this day and age? Newspapers around the world have dedicated thousands of column inches to the green superfood, and all the benefits of eating it regularly. Bars dedicated to this wonderous fruit have opened in New York, London and Milan. It’s versatile, chic and easy to work with: eat more avocados, and we’ll be healthier and more beautiful. It is really so simple? What’s the real story behind the marketing?

Slow Food Italy has already spoken about the problems surrounding avocado production in Mexico this year, but today we examine the situation further south, in Chile. To be clear, this isn’t an attempt to demonize the avocado as an ingredient, but to understand the food system which provides it, and ask ourselves if that is the kind of system we want to participate in. When we look at all the real costs of the avocado, not only in terms of its market price but its environmental and social impact on the communities where it is grown, will we still be so hungry for it?

In a report (in Italian) for Internazionale magazine, independent journalist Alice Facchini tells the story of the severe problems behind the avocado industry in Chile, where their cultivation is sucking the province of Petorca dry, and forcing the people that live there to adopt drastic solutions in order to satisfy that most primary human necessity: to satisfy thirst. 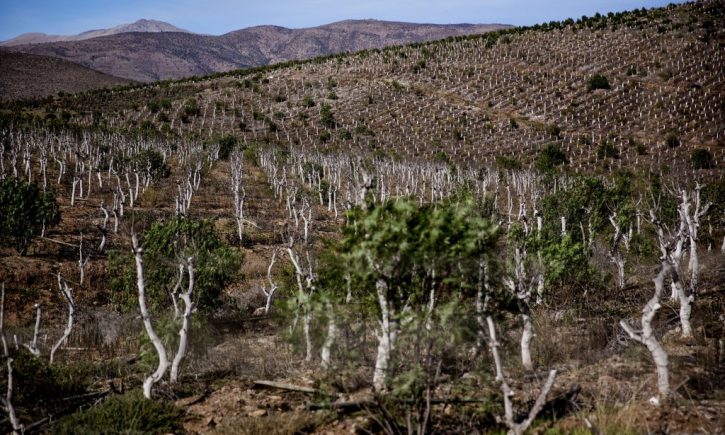 “For years now the avocado plantations have taken possession of the water which should belong to everyone. Now the rivers are dried up, as are the underground aquifers. People are getting sick due to the drought, and are forced to choose between cooking or washing, going to the bathroom in latrines or plastic bags, drinking contaminated water, while the big agricultural entrepreneurs see growing profits,” says Veronic Vilches, an “activist threatened for her struggles, who, to water the lemons in front of her house, must use the discharged water from the sink and shower to fill up buckets that she pours on the base of the plants, creating giant bubbles that explode in rainbow puddles.”

Does our guacamole taste the same, thinking about its true cost? And while we can’t take all the world’s ills onto our own shoulders, we can at least stop to think about what we choose to eat.

“Avocados travel around 15,000km to arrive on European supermarket shelves, polished and nicely displayed. To conserve them, they must be conserved at a temperature of five degrees centigrade, so they are transported in refrigerated cells. From the plantations, the crates are loaded onto big trucks that bring them to Chilean ports, mostly Valparaíso and San Antonio, where dozens of cargo freighters await them.

The journey across the sea lasts three weeks: the boats power up the South American coast past Peru, Ecuador and Colombia before crossing the Panama canal and the Atlantic and finally arriving in Europe, in the ports of Algericas in Spain and Rotterdam in the Netherlands.

There, the avocados may be stocked for a period of four to seven days in heated cells where ethylene may be used, a gas that is soaked up in the fruit’s tissue, thereby artifically accelerating the process of maturation artificially. When they are ready, they are sent in trucks to the supermarkets of the continent and sold as if they had just been harvested, though as much as a month may have passed since they were taken from the tree.”

The multinational companies behind the supply chain may be arrogant, but they rely on our disinterest in the origins of our food. As long as consumers are happy to ignore the wider social, environmental and gastronomic context surrounding the fruit stand in their supermarket, the battle is all too easily won and lost. There is a bigger picture here, and we do not have to look very hard to see it. But a little effort is required. Otherwise, we can cannot continue to fill up our shopping carts and order our next avocado bagel with easy nonchalance. Isn’t it time we started to take a little more responsibility?

Community: Living salt and yeast of the Slow Food Movement

“The term community belongs to our history, as the concept of the communities as local groups connected to the network has existed since the first edition of Terra Madre. We reiterated this message in 2017 at the Congress of Chengdu, where we talked about Slow Food Communities and called for their creation and development across the world. But we need this message to be even more pervasive, an ever-stronger catalyst for the transformation our movement needs in order to carry out its mission.”

As the European Commission is expected to launch the EU 2030 Biodiversity Strategy this March, Slow Food Europe urges the Commission to take the necessary measures to drastically reduce the use of pesticides and industrial farming to ensure the protection of pollinators. In its recent feedback on the new strategy, Slow Food Europe also draws attention to agricultural land, which should become “part of the solution to address the biodiversity crisis” and demands that the EU provides support to farmers to transition toward agroecology.

The first session of the Slow Food Academy on Agroecology, “Agriculture of the Future”, welcomed 40 participants from four different East and Central African countries (Uganda, Kenya, Tanzania and Democratic Republic of Congo) over the first weekend of February in Uganda and Kenya. This four-month course aims to train young producers and farmers on sustainable …

In January, Slow Food Netherlands had the honor of drawing attention to producers of regional Dutch products at the Grüne Woche (International Green Week) in Berlin. With the title, ‘Taste the Dutch Masters’, emphasis was put on the role that regional products play in connecting farmers and consumers.