Archive » Coffee is more than an everyday drink; it’s a complex agricultural product.

Many people can’t imagine starting their day without a cup of coffee. Yet, that simple, daily gesture feeds into a global market second only to that of oil: coffee is the most consumed drink in the world after water; its cultivation is a source of income for over 25 million families in 50 different countries.

Meanwhile, it is perhaps the drink whose history we know least about, in terms of where it comes from, how it is produced as well as its environmental and economic impact. 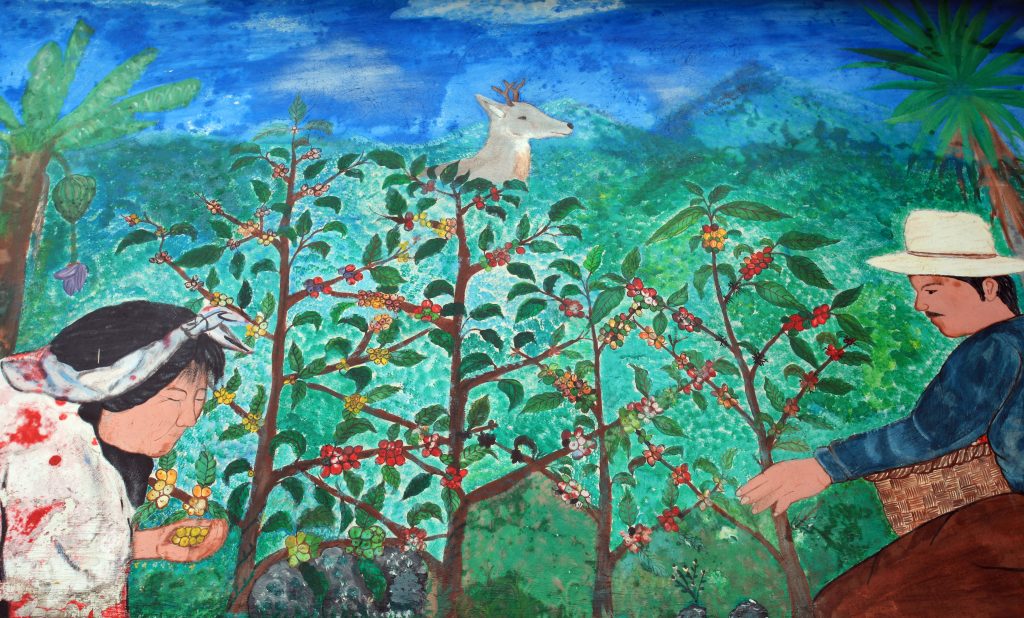 The imposition of a homologized taste

Coffee is not just that simple, every day drink that we take on the fly for a few pennies, but is instead (although we often forget it) a complex agricultural product. Before getting into our cups, it has passed through many hands and has been transformed into, what should always be, a pleasure. But instead, we find ourselves – all of us – adapting, albeit unaware, to a homologized taste, to that strong, bitter and often burnt flavor which we try to cover with generous doses of sugar. The reality however, as you can imagine, is that the differences in taste are as many as the varieties of crops (and cultures) that guide the seeds to take on very different shapes, aromas and flavors.

Coffee production and varieties on the market

Coffee is a precious fruit that grows in equatorial countries between the Tropics of Cancer and Capricorn. Originally from the Ethiopian highlands, it grows from sea level up to 2000 meters above sea level. It belongs to the family Rubiaceae, genus Coffea. There are about 70 different species, including two, Coffea Arabica and Coffea Canephora, known as Robusta, which are the most widespread and marketed in the world. In fact, Arabica and Robusta have now become commodities, commodities listed on the stock exchange that originate from intensive monocultures and that represent very little of the vast biodiversity of coffee. At the same time, there are minor species* that have no commercial value but belong to the traditions of their respective producing countries. And these varieties can offer very different coffee tasting experiences. 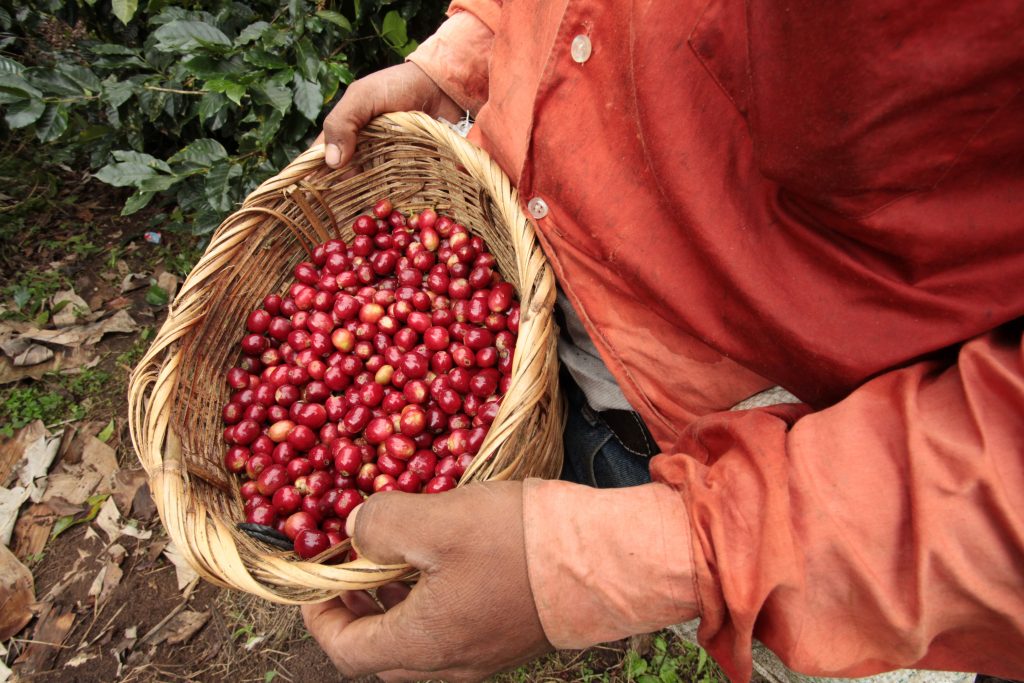 And so, it is starting from the taste, as per our Slow philosophy, that we want to start the path of learning more about who and what is behind our every cup of coffee. A taste that – as we know – has a lot to do with production and processing methods. Our spotlight will therefore be on the agricultural model, because it is starting from the land and from the respect for the land, as well as from highlighting different varieties that we can build a supply chain that respects all its actors and obtain a product that we can really define as Good.

An example of this are our Coffee Presidia. Projects that for us represent a reference model and a starting point for a reflection that will be broader and that we hope will involve as many actors as possible, starting with every consumer who enjoys coffee, born from an extraordinary plant, every day.

How I choose my coffee

Meanwhile, if you wonder how to choose the coffee that most meets your taste, we attach below a short guide on the characteristics of the different areas of origin. But the truth is, the right coffee for you will be the one that will surprise you the most.

Characteristics due to origin 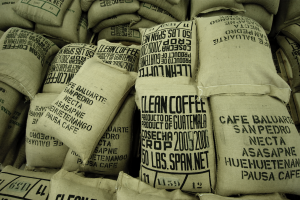 Coffees with a discreet body and acidity, very fragrant. They are consumed as individual origins.

They also offer sweetness roasted to the dark degree. They are endowed with good body, acidity and balance. Great bases for blends.

In this arabica, dominates the vinous, rather acidic scent. There are notes of flowers and fruits. The robust are full-bodied, pleasantly bitter and full of hints of chocolate. Both varieties make blends complex and better.

Pacific cafes are rich in body and for the most part of little acidity. They sound deep tones, they are basic coffees that easily marry to the origins of every place in the world.

The body is syrupy, of minimal acidity: they add body and an original note to the mixtures.

Every year over 500 billion cups of coffee are drunk worldwide (International Coffee Organization data, Ico). http://www.ico.org/prices/new-consumption-table.pdf. But how are they divided? 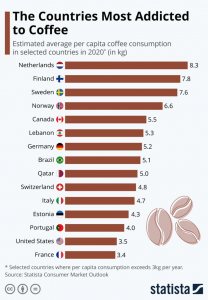 Among other species, Coffea Liberica is sporadically cultivated in Java; Coffea excelsa, endemic to Lake Chad, on the border with Nigeria, Niger, Chad and Cameroon, can reach nine meters in height and is called Kafeng Barako; The Coffea charrieriana of Cameroon, is a caffeine-free species such as C. gallienii, C. bonnieri and C. mogeneti; Coffea magnistipula, endemic to Guinea, has adapted to the soil of rainforests. The species that produces the tastiest and most fragrant seeds but that is not available on the market, is C. stenophilla. It is judged superior to Arabica in many respects: it is a strong plant, with a large harvest and produces a drink with a richer flavor. Originally from Sierra Leone, discovered in the wild at the end of the 1800s and introduced into the English colonies in an attempt to replace the Arabica affected by the rust epidemic, C. stenophilla, it was soon excluded due to the fact that it took nine years to reach maturity and bear fruit: two years more than arabica and five more than robusta.