One of the most anticipated conferences of Terra Madre Salone del Gusto 2018, united two of the foremost thinkers on climate change in the world today: Amitav Ghosh, writer and intellectual, and a fond friend of Slow Food, and Sunita Narain, political activist and environmentalist, and director general of the Centre for Science and Environment in New Delhi.

There are few left uninformed enough to deny anthropogenic climate change, and without too much cynicism it can be relatively safely asserted that those who do are driven by ulterior motives. Despite this, we remain at a sort of impasse before climate change, or specifically how we talk about it. As the news and calls for action becoming increasingly alarming and urgent, we are stuck in a loop of inaction. The need to change how we consider and talk about climate change was the starting point of the discussion and the first of many points upon which Ghosh and Narain found common ground: The silence around climate change is deafening. Ghosh pointed to the news coverage of the recent hurricanes in the USA “in 80% of the coverage, climate change is simply not mentioned.” The same applies to politics: As India endured a serious drought in 2017, one single session of parliament, across the entire year, addressed the drought. Only 10% of the chamber was present.

Narain echoed his comments, explaining how the complexity of climate change is often used as an excuse to play down its effects “Kerala in India, is a recent example. It is a state that often has floods, flooding itself is normal. And yet the recent floods were unthinkable. They completely destroyed the state, it was in fact far more than a flood, it was a deluge.” Indeed, around the world freak weather events are becoming less ‘freak’ and more frequent, yet we continue to treat them as irregularities, as abnormalities, rather than as direct consequences of our changing climate. “We need to explain to people that it is not weird weather – it is climate change!” 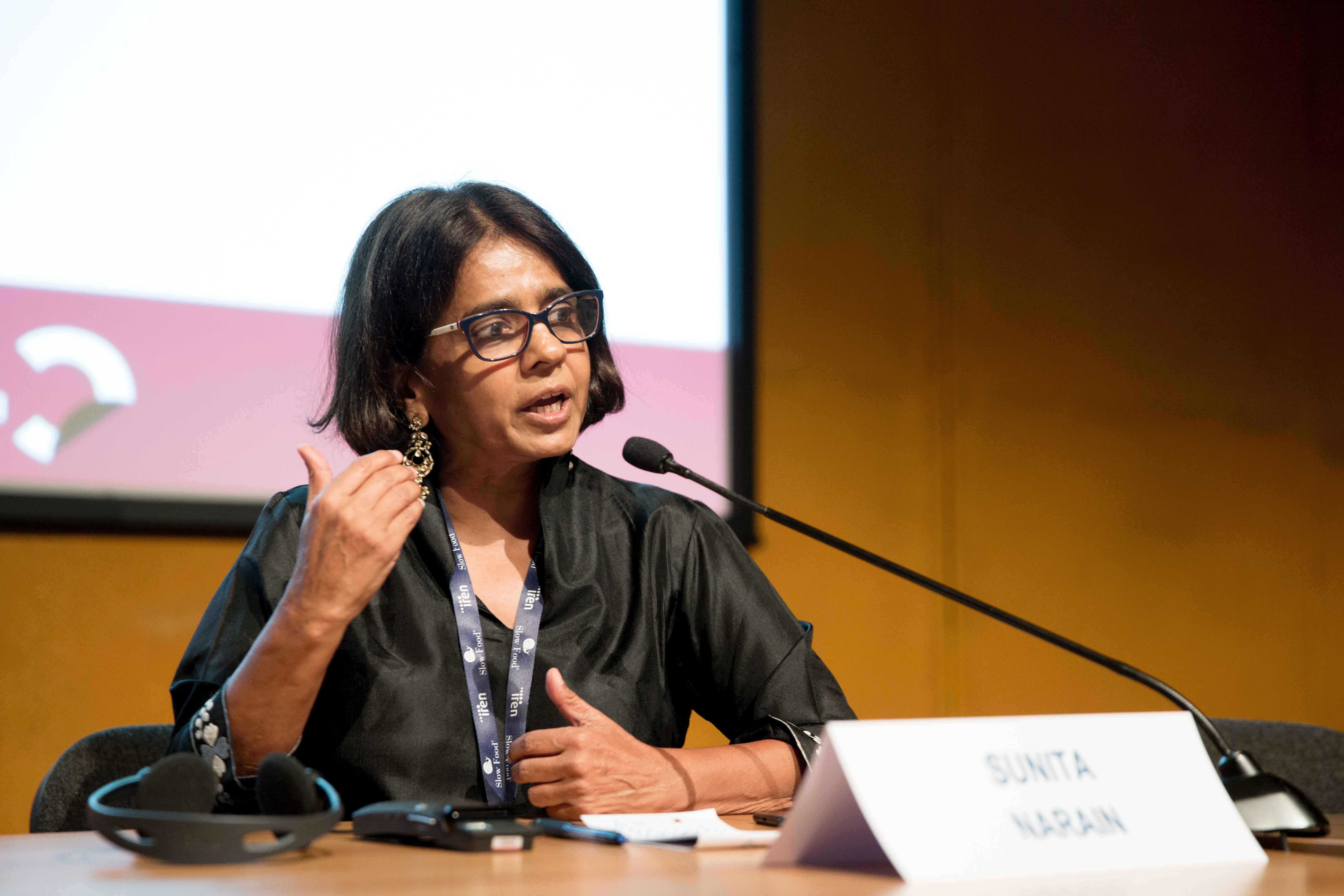 Skirting the issue of climate change has repercussions on how we deal with it. Rather than identifying and addressing root causes, we take part in what Sunita Narain calls “garbage collector’s environmentalism”, instead of reducing waste, we pack it up and move it somewhere else. This has been a burden that the West has forever lumped onto developing countries, and continues to do so. With that burden comes blame, as production and waste have been outsourced by the “men in suits”, so too have emissions. Ballooning greenhouse gas emissions are often pinned on developing countries, disguising the fact that the emissions are pumped out by factories and fields that supply and feed the West.

Ghosh expanded on the knock-on effect of such policies, drawing the link between dumping of toxic nuclear waste off the coast of Somalia, leading to the destruction of the local ecosystems, and the subsequent explosion of pirates in the region. His comments recalled those made by Pierre Thiam, only a few days before during another conference at Terra Madre Salone del Gusto, who spoke of Senegalese fishermen witnessing the collapse of their industry as a result of climate change, and being driven to become people smugglers.

The question of environmental immigration went beyond the usual discussion that we hear in the West of the effects that mass immigration has on the host countries and the seemingly inevitable lurches to the right that come as a result, as we are currently witnessing around Europe. Instead Narain and Ghosh spoke of the deeply troubling effects of climate emigration, as droughts and floods force farmers and rural communities off their land and into the cities, taking with them generations of agricultural knowledge and experience. Ghosh underlined the gravity of the rural exodus as “a loss of manpower and a loss of knowledge. These people are never going back. This is changing the landscape irreversibly.” 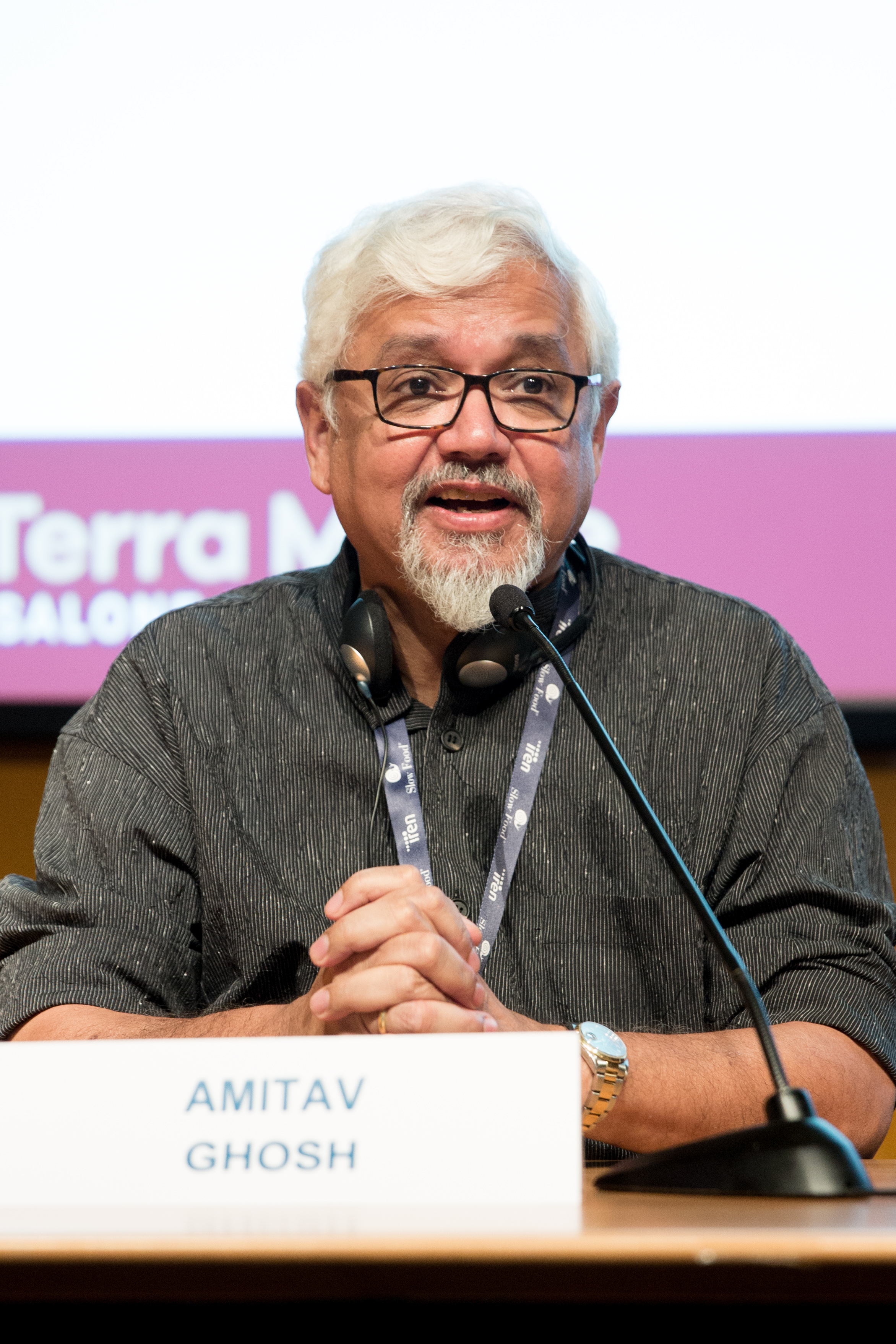 In the final stages of the discussion, the speakers were asked to share their thoughts on the future, on if and how climate change could be halted or at least mitigated. Refusing to give up, Amitav Ghosh nevertheless struck a sombre note: “I do not see much hope in the world as it is. We are still denying the truth. We are still avoiding the topic. We do not want to acknowledge or talk about climate change. […] Nobody is really interested in equality or meeting their targets, they are preparing for the future by preparing for war. Defence spending is rocketing.”

Far from optimistic, Sunita Narain suggested that hope lies in the fact that it is becoming too hard to ignore the impacts of climate change. She spoke of the air pollution in her city of New Delhi as an “equalizer”. Unlike many issues that discriminate against those who cannot afford access to alternatives, like water pollution, air pollution is universally dangerous. The richest and poorest in New Delhi, the beggars and the policy makers, all breathe the same air, and all face the same health risks as a result. This “equality” led to action: closure of a powerplant and the banning of petroleum coke. “For once the world is beginning to understand that we are one planet. We are interdependent. If you pollute today and I pollute tomorrow we both need to deal with the same waste”. Narain spoke of the progress as a victory, albeit a small one, and ultimately provided a more hopeful view for the future, suggesting an approach to the global crisis with a fitting analogy “In times of risk what do farmers do? They build biodiverse crops, they have a variety of options. That way, they are adaptive to the risks that might appear. We need risk management strategies.” She nevertheless warned that the change needed to take place at a fundamental level “we need to redefine what we mean by productivity. So far it has just been about little input and a lot of output, but that is not working.”

As the IPCC report on Monday outlined the extreme likelihood of the planet overshooting the already unambitious target of the Paris COP 21 climate agreement, the words of Sunita Narain offer a stark reminder that the “greatest issue ever faced by humankind” is not something that we can ignore or put off. “This is a matter in our lifetimes, not in the lifetimes of our children, this is happening in our lifetimes.”