Archive » Climate change and migration as a driver of knowledge

Anna Maria Ruminska lives in southwest Poland and runs, with other volunteers, the Slow Food Dolny Slask Convivium, born to promote the gastronomical biodiversity of the whole region. This article explains how things have changed in Poland since the pandemic, particularly the awareness of the importance of small-scale agriculture and traditional knowledge that can make a difference.

It was back in 2020 when Slow Food published my first text on Slow Foraging. Many changes have taken turns since, including that foraging itself has become a trend, which is not necessarily the way to sustainability.

Not all foraging, in fact, is animated by the philosophy of Slow Food.

If a forager combines the collected sustainable plants with conventional, unsustainable ingredients to make a “fancy & familiar meal” then it’s not Slow foraging.

As I wrote in my previous article, foraging is a way of getting in touch with nature, getting to know it, and continuously learning about the resources it can provide. In a sense, it is trusting. Although one might think that foraging has always been in opposition to cultivation, a pre-culture stage. Now is when we can link these two strategies together to make them complementary and help us fight changes, climate, and otherwise, that we will face.

A drought season that finds us unprepared

Our region, Lower Silesia (not only), but has also been quite dry recently. After no rain for a long time, the government announced a drought. Small farmers are demanding financial compensation and conventional agricultural industrialists use irrigation systems. In both cases, vegetable prices go up. Both cannot cope with the Lower Silesian climate which is not dry by nature. To present it differently: they don’t appreciate and take advantage of the local weather which has always been damp. It is even said, the name ‘Śląsk’ refers to this feature: ‘ślągwa’ meant damp, cold, and spooky – good for magic and… plants’ domestication and cultivation. Our magical mountain Ślęża attracted not only Slavic tribes in ca.7th c., named after that feature: Ślężanie. It also brought Celts – much earlier: in the bronze age. It’s them who introduced potter’s wheel here. 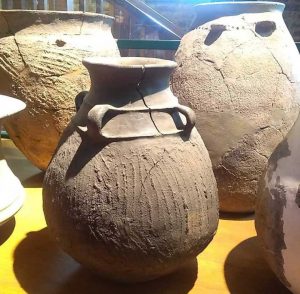 It was not without reason that many monarchs used to strive for Śląsk. The climate is outstanding for agriculture, yet we now officially struggle with drought – to be precise: modern species struggle with it, not local and spontaneous. The problem is that farmers still do not understand the territory and rarely try to learn from it. Permaculture exists, but they are too few.
Drought in Poland and other countries of Central Europe is an annual problem. No wonder that happens, with modern agriculture and gardening based on chemicals and land exploitation, working erroneously, flawed, and biased by wrong assumptions. Then it fails, requiring massive irrigation, which is not sustainable.

Hoping for a halt to industrialized agriculture is a vain hope, but engaging so that small-scale producers can be prepared and ready for change is vital. For this, small-scale farmers would:

4) use local species of fruit, vegetables, and herbs that adapt to the local climate,

5) reduced the import and pursuit of foreign species requiring agricultural and horticultural treatments.

They usually don’t follow this, hence the problems. Few farmers understand the nature of the soil and territory, even more so specific in Lower Silesia. Very few cooperate with local soil or listen to it – not only in our region. 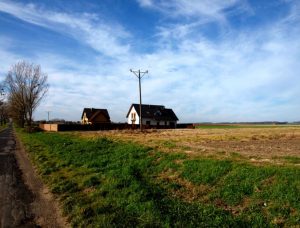 The thing is that many regions like our area have important territorial features like high groundwater levels. It has always been ambivalent:

1 – due to high humidity (usually 70/80%), many inhabitants have always had problems with joints, including rheumatic ailments. In the past, it was recommended to live here, in the lowlands, for no longer than 50 years (I should have moved out five years ago, but I haven’t).
2 – all local spontaneous plants (wrongly called “wild”) have always grown without human support, so we have rich flora and Central European jungle. Drought? Not in our forest. The abundance of trees, shrubs, herbs, and mushrooms can be overwhelming, but I know many of those are edible.
They are ancient foods that I bring back for my personal menu, culinary service, and foraging education. No, it’s not “wild food” (I will explain it in another episode). It’s friendly and tamed food surrounded by taboos, neglected by modern agriculture, Botanics, and the regular food system. 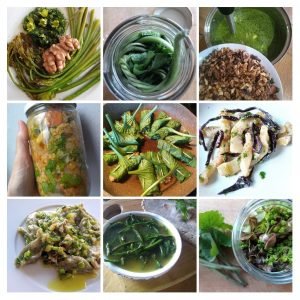 Climate change and migration as a driver of knowledge and fraternity

Problems like the drought, among many others, are closely related to the climate crisis, a pandemic that caused troubles, and migrations, as the last one after the Russian invasion of Ukraine affected a huge wave of UA refugees whom we welcomed in Poland. All of these bonding with our network members in their private life as well.

Poland has seen the entrance of over 3,5 million Ukrainian refugees. By the closing of this text (May 20), over 26 thousand refugees entered Poland – only during the last 24 hours.

Our network has made a strong commitment to supporting refugees, donating basic necessities, hospitality and help. This is what a network, like Slow Food, cannot shy away from doing, and we are proud of it.

Their arrival and integration into the community have unearthed ancient knowledge and tastes.
Many Ukrainian women immediately started gardening work, once settled in Polish homes. We’ve known that home gardening is strong in Ukraine. Here, they’ve quickly changed many flat&dead lawns into lively veggie plots – a lesson for many locals.
No wonder their staple crops are strawberries, beets, and onions. Polish cuisine has these plants too in its canon since we’ve shared the culinary heritage with Ruthenia. These products are associated with two important meals that have combined Polish & Ruthenian cuisine for ages:
1 – a fruit dessert called ‘postila’ (Polish nominated Ark of Taste product as Silesian Past; also a Ukrainian Ark of Taste product that I had initiated to nominate and we did it successfully with Tetyana & Ludmila, SF Podolia in 2019),
2 – a soup called ‘borscht’ – in Polish: barszcz. In Poland, we have 3 types of borscht soup – all are always Lacto-fermented and sour: 2x of beet, 1x of cereal, and 1x of herbs. We also have 1 historical vegetable called ‘barszcz’ (Heracleum spondhylium). One of our 3 soup types is called ‘Ukrainian borscht’ and reflects Ruthenian tradition.

The historical vegetable called ‘barszcz’ (EN: common hogweed) is a perfect example of this context. In ancient and medieval times in the area of now Poland, it was winter food of Slavs, after leaves had been lactofermented (often no salt – too expensive). The root of the Polish name ‘barszcz’ (the same as the soup ‘borscht’) is this very plant. In medieval Poland, this soup was green like an herb. Only later on, red beetroot was introduced into Polish territory. It immediately gained attention and displaced hogweed in lactofermented soup. 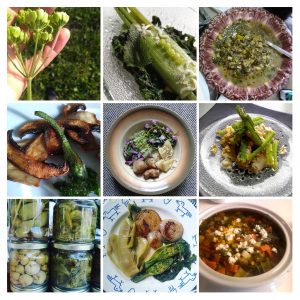 The health benefits of this plant are extremely high. Enough to say it’s worth replanting it into home gardens to reenact that ancient food by making ancient style borscht – green borscht made of lactofermented leaves of Heracleum spondhylium.

Roughly chop a big bunch of leaves, together with petioles (but no stems). Sprinkle with good local salt. Squize and let sit for 2-3h. When softer, pop them into a stoneware pot. Squeeze them tight, pour water on top to cover, put a plate bottom-up, place a stone to keep it under the brine, and close the jar – with water lock the best. If no such pot put the leaves into a glass jar and cover with hot water, twist to close and put bottom-up overnight. After that, let it sit in a cool place (10°C max) for two weeks at least. If all goes fine, the lactoferment is ready.

Chop some roots (carrot, parsnip, turnip) and an onion. Pop them into a pot. Boil it with water and salt, seasoned with juniper berry, lovage or marjoram, and garlic leaves. Boil barley or millet groats separately. When vegs are ready, add garlic cloves finely chopped and lactofermented hogweed leaves, prechopped too. Simmer another 10mins. Lower the heat, and add some fresh cold-pressed poppy seed oil. Stir well. The hogweed borscht is ready to serve. Pour it into bowls, add a groat chunk in each one, sprinkle with raw milk Twaróg cheese, and serve. It should be a bit sour, greasy, and hot.

I shared much more recipes in our hogweed manual available at this link.

➡️ We also remind you that you can examine your hair to find pesticide residue there (or not if you have access to clean local food). The link goes via the Good Food Good Farming antipesticide campaign that Slow Food is participating in until the end of May.