On October 13, several civil society organizations including Slow Food Europe, Slow Food Italy, and Slow Food Germany, sent an open letter to Stella Kyriakides, European Commissioner for Health and Food Safety, to express their concerns about the current renewal process of glyphosate. The signatories are particularly worried about the credibility of the studies that have been provided by the industry to justify the renewal of its market approval in Europe.

Ahead of the expiry of the current license (expected on 15th December 2022), the re-assessment of glyphosate is underway. The open letter calls on the European Commission to ensure that this assessment examines and takes into account the long-term toxicity of the infamous herbicide. 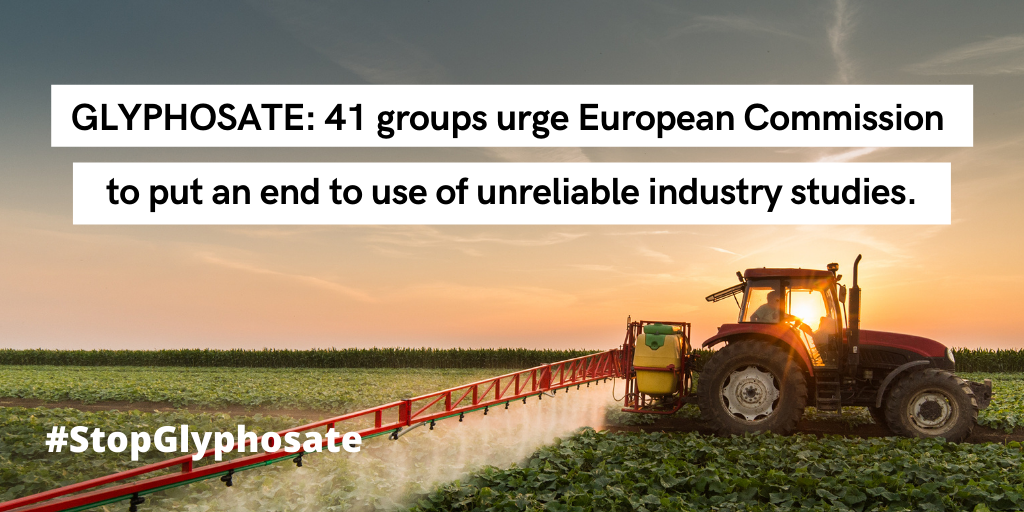 A Bit of Context

Glyphosate is the declared active substance of the famous Roundup from Monsanto-Bayer, the most widely used weed-killer in the world, and the subject of much controversy. In 2015, the World Health Organization’s International Agency for Research on Cancer (IARC), the gold standard in identifying carcinogens, concluded that glyphosate “probably causes cancer in humans”. Despite this conclusion, in 2016, the European Food Safety Authority (EFSA) and the European Chemicals Agency (ECHA), asserted that the substance did not pose any other health hazard or risk to humans, leading to the publication by the European Commission of an initial proposal to renew the market authorization of glyphosate for a further fifteen years.

This announcement caused an outcry in public and scientific opinion due to its lack of transparency and scientific objectivity, and for being predominantly based on industry-sponsored studies and conclusions. As a matter of fact, the EFSA relied on unpublished industry studies for its assessment whilst ignoring most independent scientific studies on glyphosate. Shockingly, large sections of the report underlying the EFSA conclusion were copied directly from Monsanto’s application for the re-approval of glyphosate. Furthermore, the European Commission did not investigate any of these issues at the time, despite mounting pressure and large demonstrations from the public.

Back in 2017, Slow Food supported the European Citizens Initiative “Stop Glyphosate”, which gathered over one million signatures to call on the EU Commission to fully ban glyphosate and to set clear targets towards a pesticide-free future. And yet later that year, European governments responded to public outrage by reauthorizing the glyphosate license on the European market until December 2022 (5 years). This was better than fifteen years, but agrochemical companies still got their license to keep producing and using glyphosate, in spite of environmental and health risks.

September 2021 was a momentous month for the fight against pesticides in the EU! The European Citizens Initiative (ECI) “Save Bees and Farmers” ended on September 30, 23:59 CET, with a total of 1.2 million signatures. Supporters are calling on the European Commission to take action for a phase-out of pesticides by 2035 and for the restoration of biodiversity, and to support farmers in their transition towards sustainable agriculture and agroecology.

For the second time in 4 years, EU citizens have expressed their desire for a transition towards pesticide-free agriculture, but will our decision-makers meet their expectations?

The current approval of glyphosate on the EU market is expiring on 15 December 2022. A recent independent scientific analysis reinforces the doubts regarding the credibility of the industry studies that were used during the previous EU glyphosate authorization process for the assessment of genotoxicity (the mechanism that underlines cancer development). Out of the 53 industry genotoxicity studies examined, only 2 studies were found “reliable” from a methodological point of view. Additionally, a first screening of the new glyphosate application dossier submitted by a group of companies shows that all 38 of the genotoxicity studies on “pure” glyphosate that were used in the previous assessment have been submitted once more to the EU authorities.

History is repeating itself. The EU must provide guarantees that the current renewal process is based on updated independent scientific evidence and remains free from vested interests. Rather than relying on industry-sponsored studies, the EU should rather invest in projects like the Global Glyphosate Study undertaken by the Ramazzini Institute which is the most comprehensive toxicity study ever done on a pesticide. This study would be a great opportunity to resolve remaining doubts about glyphosate’s toxicity, and its results should be taken into account in the EU evaluation.

Fact-based science matters. So does public opinion. The EU launched two EU public consultations on glyphosate, to which EU citizens can contribute until mid-November. Slow Food encourages those who have scientific and/or technical knowledge on the matter to respond.

Slow Food Stands Up for Alternatives to Pesticides

Glyphosate poses serious risks to the environment because it tends to accumulate in soils and aquifers, while residues of it are found in plants and the food we eat, which presents risks to human health. Recent research carried out by the Pesticide Action Network Europe shows the residues of 74 pesticides banned in the EU were found in food tested on the European market in 2018. What’s more, the use of pesticides causes water and air pollution, while impoverishing soils’ biodiversity and intoxicating birds, fish, beneficial insects, and non-target plants. This is unacceptable.

Slow Food has been promoting agroecology for decades, as it is the only future-proof agricultural model. Among other things, agroecology seeks to reduce and eliminate the use of synthetic chemical products and other technologies with a harmful impact on the environment, biodiversity and human health, uses resources efficiently to reduce dependence on external inputs, promotes traditional technical skills and lowers the carbon footprint of food production, distribution and consumption, thereby also combatting the pollution of the air, water and soil.

And to those who still believe that pesticides are essential to feed a rapidly growing world population, let’s remind them of a UN report that was published back in 2017, which already heavily criticized the multinationals that produce pesticides. “Using more pesticides has nothing to do with getting rid of hunger. According to the UN Food and Agriculture Organization (FAO), we are able to feed 9 billion people today. Production is definitely increasing, but the problem is poverty, inequality and distribution”, commented Hilal Elver, who was the UN’s special rapporteur on the right to food at the time.

Enough said! A shift towards environment-friendly agricultural practices is needed more than ever. Whilst French President Macron has said he is committed to the phase out of pesticides in the context of the upcoming French Presidency of the EU, we look to our European leaders to take action to fulfil their commitments, of which step number 1 should be refusing the re-authorization of glyphosate.