Over 280 participants in nine provinces and countless cities have proven the power of collective action, successfully smashing the target of #67000litres of soup set by food rescue organisation Chefs with Compassion.

Despite significant setbacks due to the unrest in KZN and Gauteng, and spiralling Covid cases, the humanity and compassion of South Africans made it possible for a total of 70 897 litres to be cooked, resulting in 283 588 people receiving a cup of soup on Mandela Day.

The #67000litres for Mandela Day initiative was launched by Chefs with Compassion, a volunteer-based food rescue organisation, in 2020 when chefs in professional kitchens stepped up to cook soup in honour of Madiba. This year, the challenge was opened up to corporates and home cooks to cook safely in their own kitchens and donate their lovingly cooked soup to a beneficiary in their immediate area.

Stories of incredible dedication and belief in making a difference were the hallmarks of this year’s #67000litres campaign. One such story emerged from Joburg when a donation of six pallets of lettuce from Fresh Mark was turned into thousands of litres of delicious soup by two neighbouring hotels at OR Tambo International Airport – Protea Hotel by Marriott®️ O.R. Tambo Airport and the Radisson Blu OR Tambo Airport. The Radisson Blu’s entire team – from housekeepers to the General Manager – worked round the clock for six days, upping their intended quota of 1 000 litres to an eventual 14 000 litres of soup, resulting in in 56 000 people in the south and east of Joburg receiving a meal. Simultaneously, the Protea Hotel by Marriott®️ O.R. Tambo Airport exceeded their target of 200 litres by 3,080%, cooking a total of 6 160 litres. Nationally, the Marriott International group participated through 11 of their hotels around the country, bringing in a total of 8,172 litres to the #67000litres Challenge.

Hundreds of home cooks contributed smaller amounts to the total and here too there were heart-warming stories of great compassion and effort. Well-known foodies Hilary Biller and Jenny Kay, who registered to cook 5 litres ended up taking 50 litres to the Bramfischerville community – 1000% more than their commitment. A partnership of two chef friends, Chef Trey of Brisket & Biscuits and Food Network celebrity chef Katlego Mlambo, cooking at the HTA School of Culinary Art in Randburg, took their intended contribution of 20 litres to 200 litres, which was donated to MES for their work in the inner city of Joburg.

In the Western Cape, a collaboration spearheaded by Chef Greg Henderson of The Wild Food Revolution and Culinary Concepts with two local breweries and the local community in Hermanus, Kleinmond and surrounding areas resulted in just under 4 000 litres of soup being cooked almost entirely from foraged ingredients. The soup, along with 800 loaves of bread donated by Blue Ribbon, was donated to communities in Stanford, Hawston, Zwehile, Caledon, Mount Pleasant, Kleinmond, Botrivier. Says Chef Greg, “The rains filled the dams and we lost 1500kg of waterblommetjies with the dam wall bursting, but we made a plan and had 200kg of waterblommetjies and 50kg of amaranth added to our soup, hand harvest salt, wild fennels seeds from last season harvests, plus additional spices from Le Merchant and 800kg of potatoes from Food 4 Love, which enabled us to increase our volume. Over and above the soup cooked, we delivered one ton of produce to a community kitchen in Strand that serves 2 500 children five days a week plus 12 tons of produce was sent to KZN. It was a busy, emotional and humbling week.”

“We are humbled and in awe of the impact that achieving the target of 67 000 litres of cook has had, and of the collective action that made this possible. Thank you to every participant for every drop of soup, to our premier partner, Compass Insure, our technology partner SYSPRO, our many, many sponsors, partners, volunteers, kitchens and beneficiaries,” says Chef Coo Pillay, Chefs with Compassion’s national project manager.

One of the most remarkable stories this year was the collaboration with the SA Poultry Association, who donated over eight tons of chicken meat and almost 10 000 eggs donated through farmers. “There is so much hardship in this troubled time, so as an industry we wanted to reach out in brotherhood this Mandela Day to help those who are facing hunger. For one day at least, there will be a warm and nutritious, protein-rich meal for each of the people reached by this initiative,” says Izaak Breitenbach, GM of Sapa’s broiler organisation. Three of the biggest producers, Astral Foods, RCL Foods and Country Bird Holdings challenged one another to donate chicken meat worth R67 000, or around 2.6 tons, each. Quantum Foods joined in with 67 x 10 dozen Nulaid eggs, and East London producer Beckley Brothers and the Pietermaritzburg-based KwaZulu-Natal Poultry Institute each pitched in with 67 dozen eggs. Gauteng egg farmer Aldabri Agricultural pledged 67 litres of liquid eggs and 67 trays each of large and extra-large eggs. A further ton of meat was donated by Bush-Valley Chicken Farm in Tzaneen, ensuring that feeding programmes in several outlying districts can also benefit from the initiative.

In Johannesburg, the Joburg Market donated 7 tonnes of potatoes, cabbage, green beans, turnip, celery, purchased through their CSI fund and distributed to Chefs with Compassion’s existing kitchens to enable them to cook massive volumes of soup for Mandela Day. 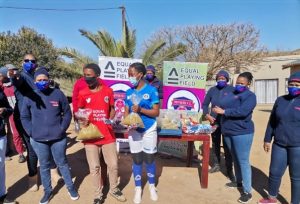 Beneficiaries of this year’s #67000litres included NGOs that work tirelessly to ensure that people don’t go hungry, such as MES, churches, orphanages, and soup kitchens. On the less formal front, many of the recipients of the #67000litres soup were homeless people who were served by participants driving to find people in need of their nourishing soup.

The future for Chefs with Compassion

“We are called upon to make every day Mandela Day, and that is the philosophy that has driven Chefs with Compassion from the very beginning. We will be continuing the work we do every day in our sharehouse in Joburg, and hopefully expanding beyond that to meet the growing need around the country,” says Arnold Tanzer, chairman of Chefs with Compassion.

“We invite every participant in this year’s challenge, once a week, to cook for those who, through no fault of their own, face the daily desperation of hunger.” 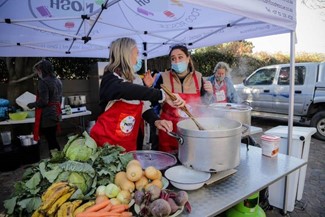 To find out more about Chefs with Compassion, go to www.cwc.org.za. Donations received through the #67000litres campaign and on an ongoing basis are used to fund the organisation’s Johannesburg operation, which rescues food that would otherwise go to waste and connects this perfectly good food to volunteer chefs, cooks and communities. Chefs with Compassion’s cost per meal to rescue, cook and feed a hungry South African is R10.

ISSUED ON BEHALF OF CHEFS WITH COMPASSION BY STRATEGIC PR. FOR FURTHER INFORMATION PLEASE CONTACT VANESSA NAUDÉ ON 083 271 6000 OR [email protected].

ABOUT CHEFS WITH COMPASSION

Chefs with Compassion is a collaboration of partners – individuals, companies, and organisations – who together rescue surplus food that would go to waste, donate it to kitchens where it is cooked, to feed the growing number of hungry people in food vulnerable areas. Chefs with Compassion was launched in May 2020 as a not-for-profit company in response to the Covid-19 humanitarian crisis, and aims to continue as long as the need can be met.

Chefs with Compassion’s Premier Partner is Compass Insure, which has been providing support to the organisation since November 2020, helping to ensure that more people can be reached.

Chefs with Compassion’s mission is to Rescue | Cook | Feed: