Archive » Changing the World, One School Garden at a Time

From November 11 to 18, 21,000 schoolchildren from 860 classes across Italy took action against climate change for Slow Food’s school garden celebrations 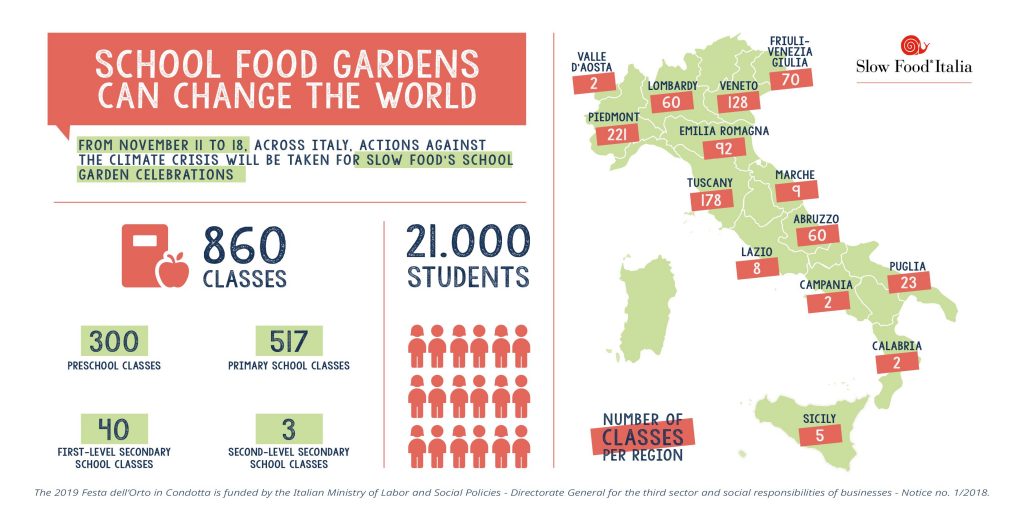 Now in its 12th year, the event celebrates the historic food, taste and environmental education project developed by Slow Food Italy for teachers, pupils, parents and grandparents. As in past years, the “Orto in Condotta” celebrations began on November 11, St. Martin’s Day, which traditionally marked the time when the fields would be left to rest as winter approached.

This date was closely linked to the natural progression of the seasons, a cycle that in recent years has been seriously disrupted by the climate crisis. Since the pre-industrial era, the average global temperature has already risen by 1.5°C, and it will likely exceed 2°C—considered a still manageable rise—before 2030. One of the main causes of this crisis is the industrialized agricultural sector, which generates over a fifth of global greenhouse gas emissions. In other words, there is a close link between what we put on our plate and imminent climate breakdown. Focusing on food and environmental education for the new generations is key to tackling the climate crisis at its deepest roots: the everyday choices of today’s adults.

The ten actions identified by Slow Food are all linked to the UN’s 17 Sustainable Development Goals for 2030. They include growing your own food in order to understand the unwritten laws of nature and have a direct impact on your ecological footprint, choosing unpackaged snacks to reduce packaging waste, finishing everything on your plate and eating yesterday’s leftovers to prevent food waste, selecting local and seasonal fruit for a more biodiverse diet and reduced transport distances, eating more legumes, buying food directly from farmers, and more. 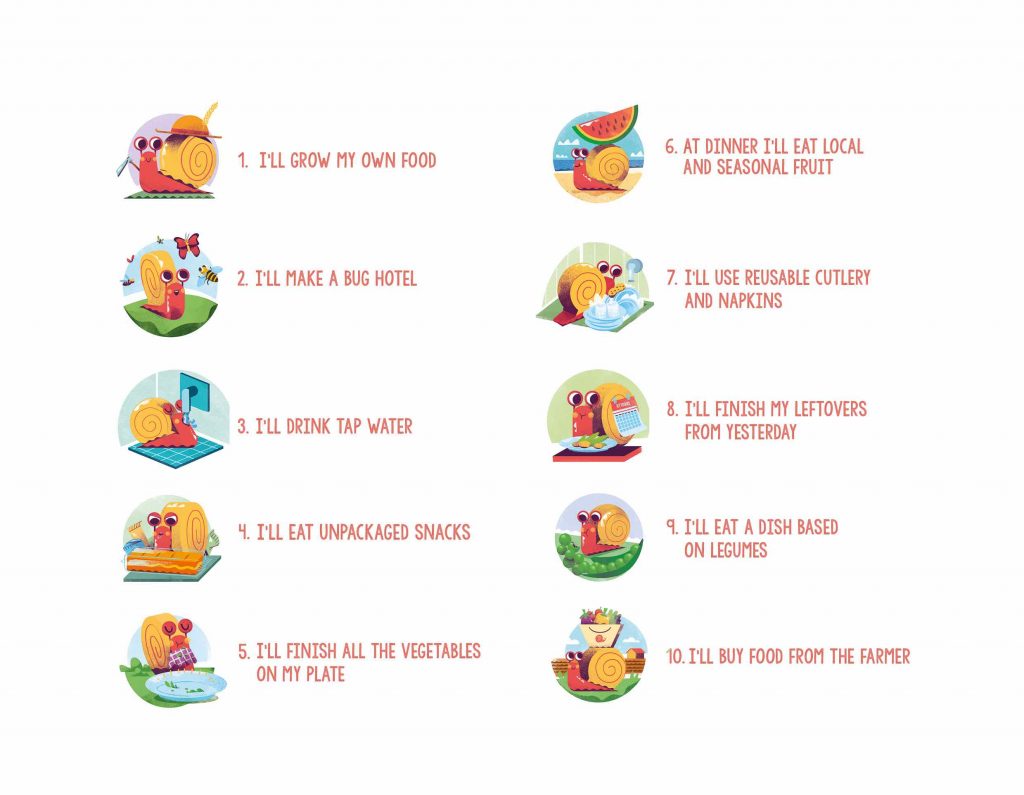 Let’s hear about some examples of actions that classes across Italy, from north to south, organized for the week of school garden celebrations.

Just starting out in their garden adventures are the primary school classes in Marsica, near L’Aquila in Abruzzo, where the four school complexes in Avezzano, Balsorano and Sante Marie will this year get four school gardens. “We’ll start off by training the teaching staff and then gradually bring in the children, so that everyone feels comfortable when we start the work in the garden, getting to know the key varieties and trying out new experiences outdoors. The aim is that the children become the promoters of change, bringing home what they have learned amidst the rows of vegetables,” says local Slow Food school gardens coordinator Marta Paris. “But there’s more: the children will be invited to share with their parents and siblings the ten actions from the school gardens information kit and we’ll monitor the families’ commitment to reducing water waste, using up leftovers and separating garbage. At the end of the month we’ll collect the results and see what were the easiest objectives to reach and which still need more work.”

Varallo, in the Piedmontese province of Vercelli, is home to the only Italian food garden supported by a Slow Food Presidium, for Macagn, a historic Piedmontese cheese produced in the Valsesia mountain pastures. The project involves around 80 preschool and primary school children. Emanuela Ceruti, a Presidium producer and Slow Food coordinator  for the Varallo project, says: “In our work every day we come across a certain difficulty among adults in understanding the agricultural world and therefore also traditions, seasons and the social relationships between people who live in towns and cities and those who work in the mountain pastures.” She continues: “So we decided to start over with the children and have them experience an ancient environmental dimension fundamental to teaching the basics of food. The children don’t have schemas, they absorb immediately and appreciate the support offered to them when it comes to food choices. In our context the willingness of the schools and teachers to take part has also been essential.” 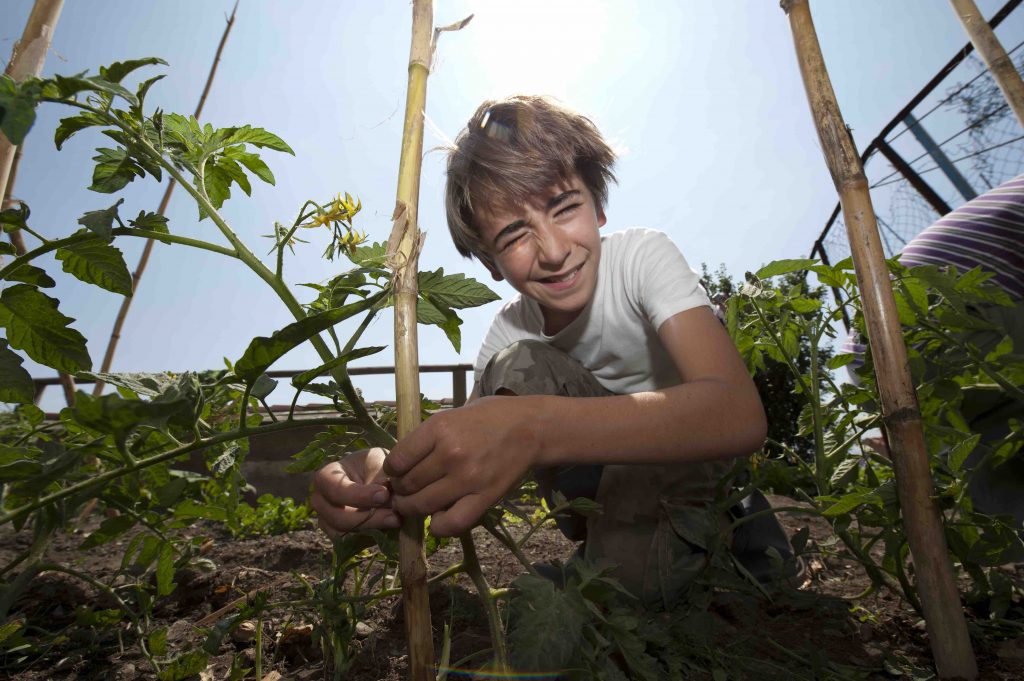 The Veneto province of Treviso is at the forefront of the Slow Food celebrations, with 68 classes participating. “Children, like seeds, need time to express themselves, but they are our hope for the future. Change is as silent as a growing forest. It needs time, as in nature, where everything that changes quickly creates disasters,” Michele Romano tell us. The local Slow Food project coordinator and keen horticulturalist continues: “The Orto in Condotta network in Treviso was one of the first and is one of the most active. From the oldest garden in Sala di Istrana to the newly created one in Selva del Montello, everyone really feels this year’s theme and in addition to the ten climate-friendly actions they are also planting new trees, like the Zerobranco school which started with some typical local varieties.”

Thanks to local generosity, the Livorno Convivium in Tuscany and the young people from the city’s Fridays for Future group have received a donation of 100 trees and have launched an appeal to all the city’s schools to adopt at least one. “They’re mostly olive trees, fruit trees and shrubby trees from the Mediterranean maquis that we’ll plant out from November 11. With the gardens celebration we’ll also start a process of awareness raising about the climate crisis and good practices that will continue for the whole school year, aimed at 100 classes from 40 school complexes—around 2,500 children from nursery to first-level secondary school—in collaboration with the kids from the Livorno Fridays for Future,” says Valentina Gucciardo, who coordinates the gardens project locally for Slow Food. “Additionally the cafeteria service will give us information about the ingredients used for the menus all week. We’ll analyze it together with the children, mapping each meal based on where the products came from.”

The fourth- and fifth-grade classes of the Guglielmo Marconi school in Lentini, near Syracuse in Sicily, are responding to the climate crisis by planting a carob tree in their schoolyard. Alongside the tree, a typical sight in the eastern Sicilian landscape, they will also bury a box containing the names of the 70  or so children involved, as testimony to their commitment to environmental protection. “As this tree grows it will remind them every day of how much each of us can do with simple actions to protect the landscape and local agricultural and food traditions,” says the Slow Food gardens coordinator for Lentini, Salvatore Giuffrida.

The Orto in Condotta celebrations will end on November 18, but activities will continue throughout the year. For example, thanks to Slow Food, all 250 school complexes will join the European Week for Waste Reduction (EWWR), to be held November 16 to 24.

The 2019 Festa dell’Orto in Condotta is funded by the Italian Ministry of Labor and Social Policies – Directorate General for the third sector and social responsibilities of businesses – Notice no. 1/2018.