Archive » Celebrate the 30th Anniversary of the Signing of the Slow Food Manifesto With Us!

The Slow Food international network is preparing to celebrate the 30th anniversary of the historic signing of its founding manifesto—at the Opéra Comique theater in Paris on December 10, 1989—with an international campaign that will be a chance not only to remember what has been achieved over the last three decades but also to reaffirm the importance of continuing to work for the future of food and the planet.

Starting from October, “30 Years of the Slow Food Manifesto – Our Food, Our Planet, Our Future” will involve all the nodes in the network in the organization of events to be held between December 1 and 10, to promote the thousands of food initiatives run over the years and to raise funds for the association’s many biodiversity-protection projects. 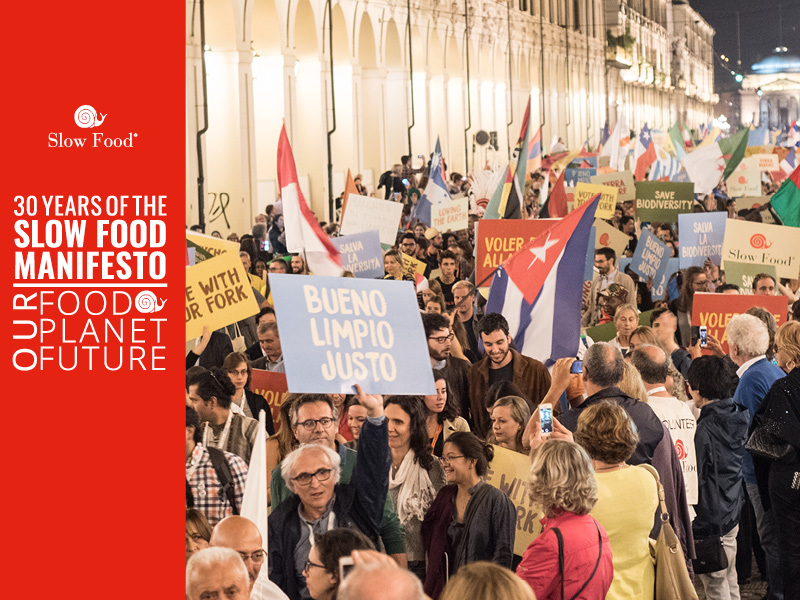 Slow Food was founded to defend the right to pleasure and the cultural value of local cuisines, in opposition to the fast life cited in its manifesto, but it has evolved to become one of the leading international actors (and the only acting through food) working to prevent the extinction of thousands of animal breeds and plant varieties.

This shift and these actions, which began in 1996 with the formation of the Ark of Taste and were ratified by the 2003 establishment of the Slow Food Foundation for Biodiversity, are at the heart of the Declaration of Chengdu, approved at the International Congress in 2017. Now Slow Food is a global network made up of over a million activists and sympathizers, including farmers, fishers, cooks, food artisans, educators and citizens all working together every day to affirm the key principle of the declaration: guaranteeing the right to good, clean and fair food for all.

Slow Food’s objectives are increasingly being identified as key elements to mitigating the progressive collapse of ecosystems and the climate crisis, and now more than ever before, 30 years on from the signing of the manifesto, a global mobilization of all of Slow Food’s convivia, communities and activists is crucial. Many projects still need to be developed, many producers able to offer an alternative still need our help, many people still want to know how to start “thinking Slow Food” so that they can look to the future with hope.

If you also want to do your part to defend biodiversity, looking to the future of food and the planet, then join our campaign by making a donation, becoming a Slow Food member or renewing your membership (https://members.slowfood.it/join-us/index_en.php) and participating in one of the many events that will be organized around the world from December 1.

Let’s get ready to celebrate 30 years of working for good, clean and fair food with the entire global network. To make an active contribution to realizing a better future we need everyone’s help!