Slow Food president and founder Carlo Petrini will take part in a demonstration tomorrow against the planned opening of a McDonald’s franchise in Paris’s Rue Montorgueil. The movement Quartier sans Mac Do (“neighborhood without McDonalds”) has been fighting for six years against the proposed arrival of the fast-food giant in the characteristically Parisian pedestrian street. Carlo Petrini will be in Paris to present his new book Libérez le goût, (“Food & Freedom” in English) and will join MEP, farmer and anti-globalization activist José Bové in the demonstration.

It’s not the first anti-McDonald’s protest for Petrini, who famously founded Slow Food 30 years ago after rallying against the opening of a McDonald’s at the foot of Rome’s historical Spanish Steps. By joining the demonstration in Rue Montorgueil, Petrini wants to draw attention to the industrial food system, whose agriculture, processing and sales are damaging the environment, health and food culture of several generations. 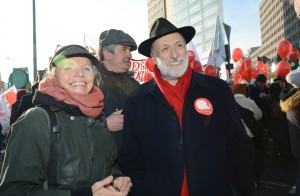 Rue Montorgueil is a lively pedestrian street lined with restaurants and high-quality food vendors, and is one of the last remaining traces of the famous Les Halles covered market, which fed the city until the 1970s. With the rising cost of commercial rent, small independent shops are weakened by the financial strength of large restaurant chains, and McDonald’s represents a direct threat to the commercial diversity of one of the most typical neighborhoods of Vieux Paris. Planned on three floors with 160 seats, the franchise would furthermore be located in front of a nursery and within 300 meters of six other schools.

The opening of the franchise has been delayed for six years thanks to the mobilization of the entire neighborhood, a number of courageous local politicians and the City of Paris, which has twice refused permission requested by the multinational. But in April 2015, after McDonald’s appealed against the court’s decision, a judge overturned the ruling.

Quartier sans Mac Do has not been discouraged, taking inspiration from the other neighborhoods in Paris such as the 4th arrondissement, Montparnasse, Oléron and other French cities where local resistance has already defeated the planned opening of several McDonalds. “Our fight is not a selfish one but an exemplary one,” they write. “We can win by sticking together.”