Ahead of the “Super Trilogue” negotiations on March 26, 41 civil society organisations wrote an open letter to the European institutions, asking for an ambitious, green and fair reform of the Common Agricultural Policy. 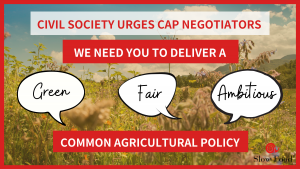 On October 23, 2020, the European Parliament decreed a major defeat for biodiversity, the climate, and environmentally friendly farming. The plenary voted in fact to decrease the already low environmental ambition of the reform proposal of the Common Agricultural Policy (CAP) put forward by the European Commission. A vote that has erased any coherent connection between the European Agricultural Policy and the Green Deal, thereby making the road to the ecological transition of agricultural supply chains in Europe tortuous if not impossible.

The CAP voted in October is in fact unfair, lacking measures to reduce the negative impacts of industrial agriculture on the environment while incentivizing land concentration through a system of direct payments based on number of hectares per farmer. No real measures to convert subsidies from monocultures and industrial livestock farming to more agroecological systems and support to small-scale farmers were agreed.

Exactly the opposite of what is needed. A key figure is important to understand the gravity and contradictions of this situation: in Europe, 80% of payments go to 20% of the farms, causing huge imbalances in the distribution of CAP funds and in the food chain, and hindering support for small-scale agroecological farmers, whose practice preserve biodiversity, soil health and help the environment to regenerate.

After months of negotiations, on March 26th the Trilogue is meeting for discussion: representatives from the main European institutions, the Commission, the Parliament and the Council, are called to discuss their respective positions on the text of the regulations for the next Common Agricultural Policy (entering into force in 2023).

Our hope and strong appeal is that the Commission does not give in on the rules for achieving the objectives of the two Green Deal Strategies, Farm to Fork and Biodiversity 2030.

A request that a broad coalition of European organizations (from the food, agriculture, environmental, development and public health sectors) has addressed to the European Commission, the Presidency of the Council of the European Union and the European Parliament rapporteurs on the CAP regulations in an open letter that represents the will of millions of citizens and farmers, who are calling for an ambitious, green and fair reform.

Together with 40 organisations, we asked the European Institutions to “deliver an ambitious, green and fair reform of the Common Agricultural Policy” as part of the larger ambition to transition to a greener European Union, in all sectors. The European food system is currently unsustainable and “Farmers will not survive another decade of business-as-usual policies”. Biodiversity collapse, climate collapse, severe power imbalances in supply chains, and chronic overproduction are producing victims not only among European farmers. “Farmers in the Global South, seasonal farm workers, rural communities affected by agricultural pollution, and our rapidly deteriorating natural world also deserve better policies.” Therefore, the CAP concerns us all.

“Addressing these structural challenges requires an ambitious and forward-looking policy, which must start with the post-2022 CAP. The European Green Deal, put forward by the European Commission and welcomed by Member States and the European Parliament, makes a clear commitment to ‘a fair, healthy and environmentally friendly food system’ as part of a just transition to a zero-emissions Europe. This cannot happen in the agricultural sector without a CAP that provides a clear path to change and supports farmers in the transition.

The main demands in the letter

As lead negotiators in the ongoing Trilogues, we urged the three legislators to integrate the following overarching priorities into the three regulations of the CAP:

Want to be active on European Food and Farming policies?