Archive » Can We Imagine a Standard, Logo, or Certification that Represents Slow Food Values?

At this year’s Terra Madre Salone del Gusto, a number of forums and conferences dealt with some sensitive issues for Slow Food’s future. Among them, the ever contentious question of how to approach the idea of certification of Slow Food “approved” fisheries or products. Compelling arguments can be (and were) made on both sides of the debate, and the task for Slow Food and the network will be finding a way to go forward while keeping in mind the all of the various situations in which Slow Food communities and followers find themselves.

Logos and certification systems for fish products and fishery practices are difficult and controversial because of the range of contexts across the globe, but the fact remains that many small-scale fishers want to find a way to communicate their strengths and values to consumers. Charles Redfern, the Forum moderator and the founder of Organico and Fish4Ever, gave an overview of the problems related to existing certifications, such as the MSC (Marine Stewardship Council): Logos like these benefit the fishing industry rather than small-scale fishers (this is due to high costs, reliance on large volumes of data, etc.) and fail to address social values, which are crucial for small-scale fishing communities but often not considered important by the public. Due to the ubiquity of conflicting information about logos and certifications, and the fact that retailers have such a big influence on public opinion and consumer knowledge, many people simply don’t know what options are available and what the realities are. This has created serious trust issues. Even if logos and certifications are not the answer, Charles Redfern emphasizes that we should care that the fishing industry is taking the definition of sustainability away from small-scale fishing communities.

Nobuyuki Yagi, of Marine Eco-Label Japan (MEL Japan), elaborated on the issue of trust. In Japan, 95% of fisheries are small-scale fisheries. MEL Japan is similar to MSC in some ways, but it operates only within Japan (MSC has no interest in certifying Japanese fisheries, because they are so small), so it creates trust between fishers, consumers, and markets (which also tend to be smaller). In the 90s, Japan started to import a lot of fish products and MSC came to Japan and started telling people not to trust the small-scale fisheries. Nobuyuki says that third party labeling won’t help small-scale fishers because it is primarily about profit, not people. He also says that trust requires shared values—which, of course, depend on context.

Caroline Bennett, of Pinta Fish and Sole Direction in the UK, talked about how certifications can address social issues. She says that trust and relationships are everything. Boats should be owner operated and transparency throughout the whole chain is much needed. This transparency is easy to achieve for small-scale fishers, and is used to create trust among customers. Competing with the prices of industrial fish products is never going to be easy, so small-scale fishers must focus on social values and sustainability. Caroline thinks that the market is a difficult place for Slow Fish values and that people cannot be expected to know too much about fish and fishing methods: “So it’s our responsibility to offer something that helps customers at the marketplace and is not just some logo like the MSC.” 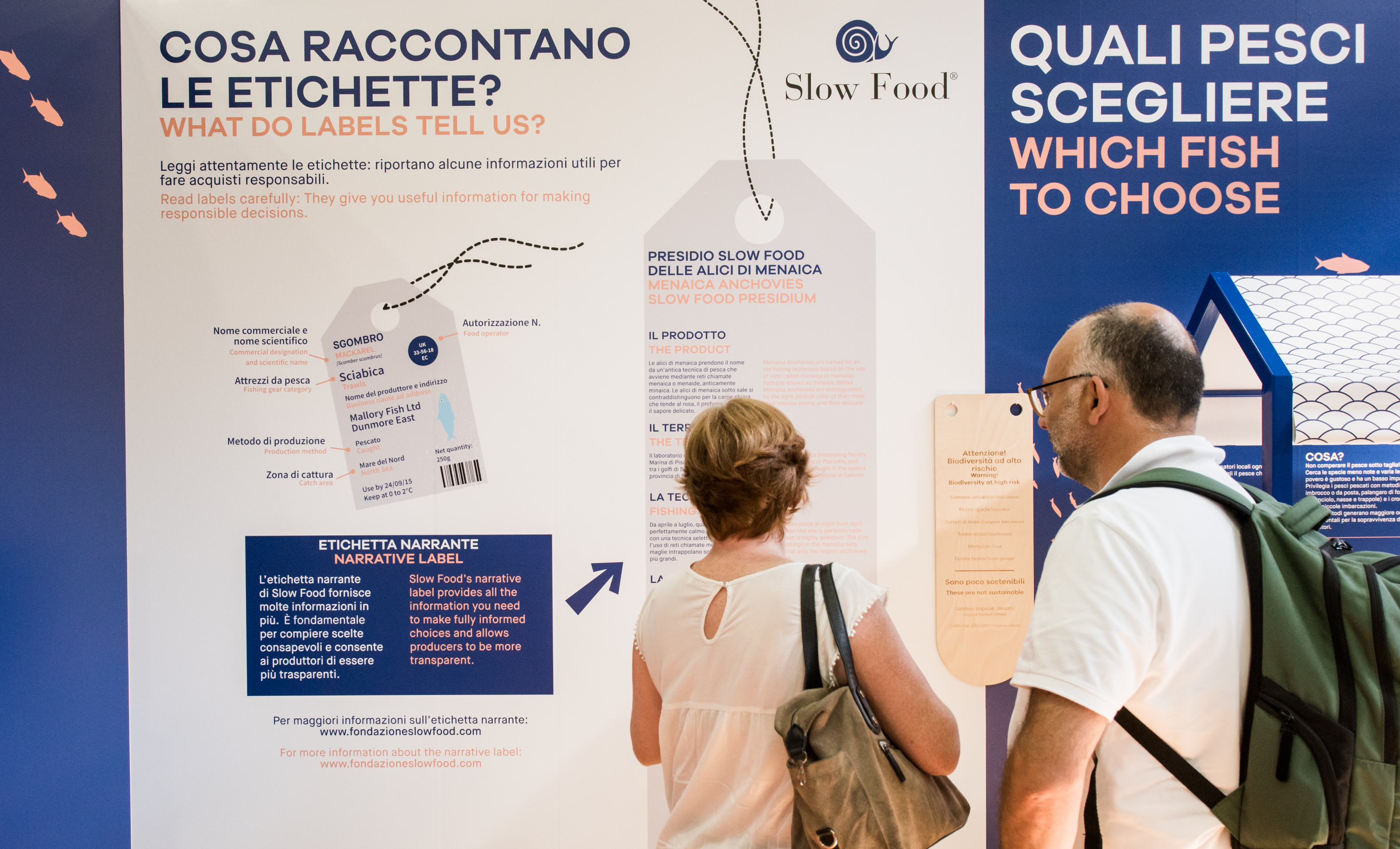 Disagreement and controversy also exist within the Slow Food network, and people are hesitant to make definitive statements about creating a logo or certification because the issue is not black and white.

Mathilde H. Autzen (Denmark) of the Thorupstrand Coastal Fishermen’s Guild, a Slow Food Presidium, focused on the question of who gets to be part of a certified fishery: “It is always difficult to decide who is in and who is out,” Mathilde says. The MSC is focused on the output of fisheries and effects on the environment, but maybe the focus should be more on the input or the broader context: which gear is used, how the quality of the fish is affected, social values and implications, etc. The difficulty here arises because, “we all have social standards, but putting them into one single label is nearly impossible because values often cannot be transferred from one context to another.”

Hasanah Kehmasaw, from Thailand, introduced the issue of traditional knowledge, which also varies enormously from one context or culture to the next. She works for the Fisherfolk Social Enterprise, which tries to link consumers to fishers in order to create trust. She sees this connection as crucial and says that most certifications do not take traditional knowledge into account, but that this knowledge is very important and should be recognized.

When the floor was opened for discussion, one member of the public suggested that the important thing is to focus on the ways in which people come together to put the Slow Food and Slow Fish values into practice, rather than on particular methods. This is difficult to communicate to consumers, and perhaps a label or logo should not be about a product per se, but about values that people can identify with and trust. But some people had negative views of certifications in general, arguing that logos and certification schemes ultimately only help the big players because the social and human aspect (the strength of small-scale fisheries) cannot be effectively communicated through a logo. One person said that Slow Food’s strength comes from the fact that it does not sell anything, and therefore stands as an independent organization that supports people who identify, in their own way, with the Slow Food philosophy.

By the time the Forum wrapped up, it was clear that there are still many open questions. There was general agreement that social values and the human dimension must be at the core, and that relationships between people must be strengthened. There is no single certification that will work for everyone, but communicating with consumers is critical, and it is therefor necessary to find ways to transmit the diversity of various contexts. The general state of fisheries and small-scale fishing communities on a global level is not improving, so it is more urgent than ever to take concrete action.