Archive » Can Agroecology Feed the World? A conference with Miguel Altieri, Yacouba Sawadogo and Anuradha Mittal. 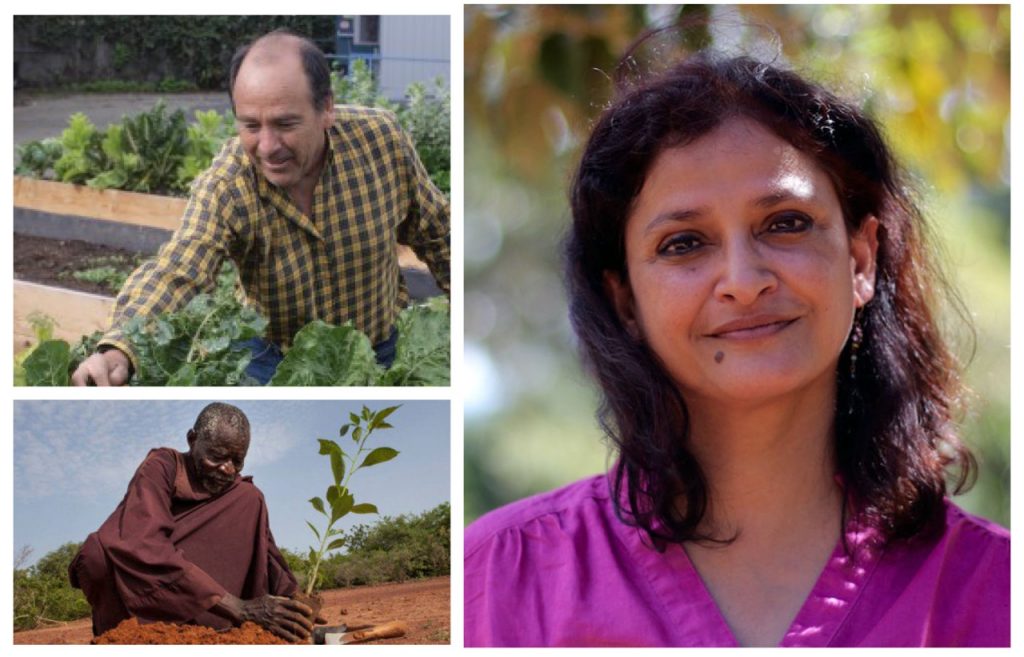 Agroecology turns the agricultural industry’s business model on its head: taking care of natural resources, valuing a diversity of plant varieties and animal breeds, harmonizing modern science with traditional knowledge and proposing a way to feed the world with small-scale agriculture in an era dominated by climate change.

This paradox is not the only consequence of the current food system: the spread of genetically homogenous monocultures is drastically reducing biodiversity, the use of pesticides and herbicides has increased dramatically and essential resources like water and fertile soil are ever more scarce.

The causes of this devastation can be found in the push for agricultural productivity that came with the Green Revolution from the 1960s onward. The industrialization of agriculture—with the consequent use of agrochemicals, the introduction of hybrid varieties and commercial animal breeds with high yields, extreme mechanization and the indiscriminate use of water—has led to a production system entirely based on fossil fuels, which destroys soil fertility, consumes non-renewable resources and pollutes water, soil and air. It destroys biodiversity and accelerates the concentration of land, seeds and food in the hands of a few multinationals, creating massive inequalities between the global north and south.

Faced with such a disheartening picture, is it still possible to change direction and imagine a different production system?

Slow Food believes such a system already exists: agroecology, which takes care of natural resources, values diverse plant varieties and animal breeds and harmonizes official science with traditional knowledge. It is not just a production system, but also brings together agronomical, environmental, social and cultural aspects.

In Turin, agroecology will be one of the central themes at Terra Madre Salone del Gusto. On September 24, the Teatro Carignano will host one of the fathers of agroecology, Chilean agronomist Miguel Altieri, a professor at the University of California, Berkeley. “We need to encourage forms of agriculture that are biodiverse, sustainable and socially just,” says Altieri. “Small farms preserve biodiversity and natural resources and obtain good yields without synthetic chemicals, through the use of compost and techniques like green manuring (increasing soil fertility by plowing certain crops back into the soil) and mulching (covering the soil with organic material like straw) or the organic control of parasites. In many African, Latin American and Asian countries, small-scale farmers use mixed systems with polycultures combined with wooded areas and livestock: an agroecological model able to offer food security to thousands of people in the countryside and in the city.”

Yacouba Sawadogo, a farmer from Burkina Faso who will tell his story during the conference, is concrete proof that the right way forward is based on traditional knowledge and respect for the land. Named “the man who stopped the desert” in a documentary about his life made by British director Mark Dodd in 2010, Yacouba has brought a piece of the Sahel back to life thanks to the use of traditional cultivation techniques that are now studied around the world.

The story begins in the 1970s when Burkina was hit by a serious drought. The desert was advancing and thousands of people either died of hunger or fled. Yacouba, whose family wanted him to become an imam, decided instead to become a farmer. He started reviving ancient agricultural practices like digging zai pits, holes in the dry, barren soil filled with compost during the dry season so that they are ready for when the rains come, and building cordons pierreux, micro-dams in the earth that can retain water. Out of the desert, Yacouba has created 12 hectares of forest planted with over 60 tree species.

Speaking at the Teatro Carignano with Altieri and Sawadogo will also be Anuradha Mittal, founder of the prestigious and innovative Oakland Institute, an independent institute working on land rights, food systems, agroecology, sustainability and climate change.

Can Agroecology Feed the World?