Archive » Cameras to be introduced in French slaughterhouses

As Paul McCartney, long-time champion of vegetarianism, once said, “If slaughterhouses had glass walls, everyone would be a vegetarian.” He was probably right: seeing what goes on in a slaughterhouse would dissuade most consumers from eating meat.

No glass walls yet, but a proposed law passed by the French parliament at the start of January will bring video surveillance to slaughterhouses, enabling their interiors to be documented in order to allow more rigorous and effective controls and to verify that animal welfare is being respected.

It was in fact in France last year that the NGO L214 (the name refers to a 1976 law that states that “every animal is a sentient being”) managed to secretly film inside the Alès municipal slaughterhouse. The video was picked up by Le Monde and we discussed it in an article. It showed clearly how all too often, animal welfare is ignored in slaughterhouses. 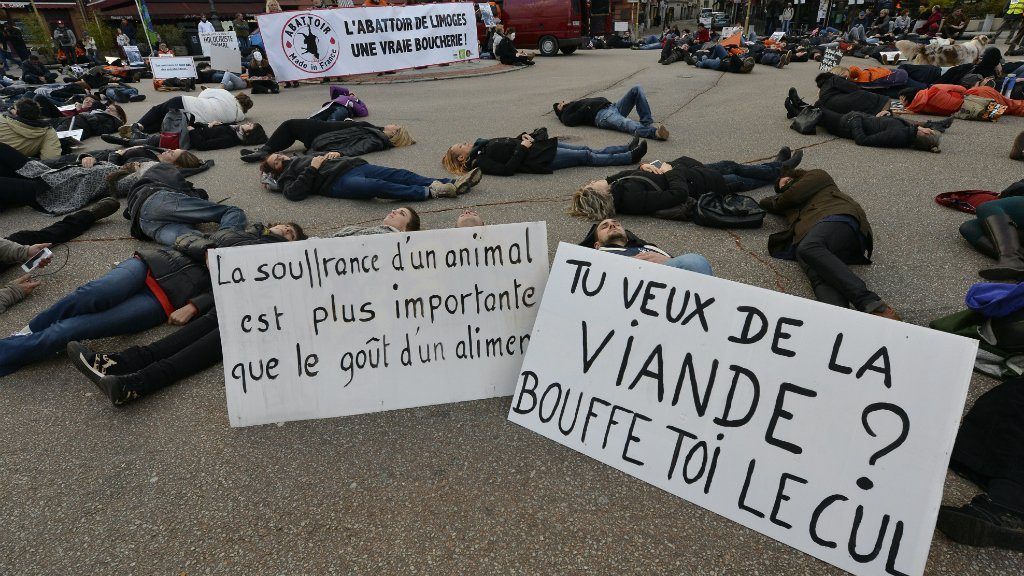 Photo: protestors from the L214 organization at a demonstration against animal rights abuses. The placard on the left reads: Animal suffering is more important than the taste of food. Source: France 24.

The proposed law wants to help solve the problem. French parliamentarians have adopted an amendment that means, as of January 1, 2018, video cameras will be installed in 263 slaughterhouses around the country. The law also provides for the creation of a national ethics committee on slaughterhouses and toughens the sanctions in case of animal maltreatment. This is a decisive step towards greater transparency, which must now clear the French Senate by early March before officially becoming law.

So no glass walls, but cameras yes, which will at least make it possible to see if the farmed animals are being treated well or not and to intervene when laws and production protocols are not being respected. Greater transparency should help influence consumer choices and, at the same time, persuade slaughterhouse to change course, guaranteeing the animals a better existence and preventing gratuitous suffering.

Having spoken to several farm operators from the Slow Food network in France, however, we found a lot of doubt expressed on the usefulness and effectiveness of the measure: “Going by the logic that tells us to put CCTV in the slaughterhouses, it would naturally follow that we put them everywhere on farms, everywhere that there could be a risk. And yet, as far as we are concerned the real problem lies elsewhere, a problem that we centers around trust, morality and love, which CCTV cannot help with. Cameras and checks are not the solution. To restore trust between consumers and producers we need to act differently, and encourage a more direct relationship between the two groups, and indeed, between consumers and the food they eat, so that they may learn to recognize food of quality which is product with respect for animal welfare.”