The Cerrado, the largest savanna in South America, is dying on the hands of grain and livestock producers and taking with it unmeasurable biodiversity, food sovereignty, and water security.

5% of the Earth’s flora and fauna are endemic to this large swath of land composed of savanna, woodlands, and tropical forest, including 1600 species of mammals, reptiles and birds, and 10,000 plant species not found anywhere else in the world.

It is also the birthplace of some of South America’s most important rivers: the Amazon, Paraná-Paraguai, and São Francisco. And while global efforts directed attention to the destruction of the Amazon, big industry and government entities diverted theirs to clearing the Cerrado Biome to plant soy, corn, cotton, and raise cattle, pigs, and chicken, and currently, only 20% of the native vegetation remains.

This Friday, September 11, Slow Food International stands with Slow Food Cerrado in protest to raise awareness of the destruction of the Cerrado Biome and the heartbreaking loss of biodiversity of fauna and flora, but also of indigenous peoples, their languages and traditions carried out for centuries, all supported and in support of this natural ecosystem.

“There are approximately 12 thousand plants cataloged, many for human consumption and 400 potentially medicinal plants are being researched. It is also home to several original peoples, with about 216 Demarcated Indigenous Lands, from Quilombolas, with about 44 communities mostly occupied by African descent people; the Geraizeiros, peasants from places where the term Gerais is used to designate the Cerrado; Coco breakers, who are women from the communities that work with breaking of babassu coconut; Vazanteiras, which are usually located on the banks of São Francisco’s River, living off fishing, foraging and animal husbandry; the Fundo and Fecho de Pasto communities, which use common grazing areas to raise cattle and goats, as well as gathering medicinal plants and food; also the always-alive pickers (native flowers that are harvested and undergo a drying and coloring process are spread over 50 municipalities, with their activity being intrinsic to their history and source of income,” said Jean Marconi Carvalho, spokesman fro Slow Food Cerrado at Slow Food Brazil.

Overshadowed by the magnificent Amazon rainforest, the Cerrado covers 20% of Brazil, edging the Amazon as it makes its way from the Atlantic inland, and reaching into Northeastern Paraguay and eastern Bolivia. It is as big as England, France, Spain, Germany, and Italy combined, and a vital source of food and water. Sadly, scientists said the Cerrado has already reached its evolutionary highpoint, and once degraded it will never recover the fullness of its biodiversity.

“The Cerrado is murdered daily for the sake of ”progress” and in its name, more than half of its area has already been devastated, to make way for monocultures (mostly transgenic) of soy, corn, cotton, eucalyptus, in addition to cattle raising (55% of Brazilian production comes from there). These are violations made by a select group that includes Cargill, Bunge, Bayer, with the support of the State regarding project financing, tax exemptions, among other benefits, like the Agricultural Development Plan (PDA), or Matopiba, for example.”

In the past decade, the Cerrado has continued to suffer from droughts as it loses vital vegetation for water conservation. The deep root system of native Cerrado vegetation maintains the water balance throughout Brazil, feeding 8 out of the 12 different hydrological regions in the country. It also supports rainfall through evapotranspiration, known as flying rivers.

“By exchanging the diversified system of native vegetation, with deep roots, for a much simpler agriculture system, the capacity to recharge water is reduced. Monocrop vegetation does not absorb rainwater like the native forest, making the soil dry. The more we deforest the Cerrado, the less water we will have. On average, 10 medium-sized rivers disappear per year in the biome.” 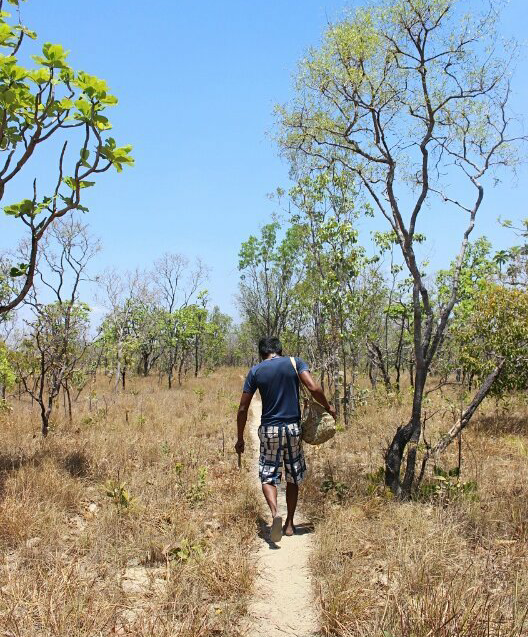 The unfortunate continuation of colonialism over these lands supports the entry of large companies and their promise of modernization for the communities, ignoring the deeply rooted local traditions and social-economical importance of the ecosystem to the peoples who have inhabited it for centuries.

“Large companies plunder the local wealth to later leave nothing but destruction. The government’s considerable disregard for the various crimes reveals strong environmental racism present in government institutions, which denies the link between traditional and peripheral communities with nature, groups essential to the conservation of biodiversity, the economy, and the quality of life in Brazil and around the world.”

Continuing on this path will bring more poverty and food insecurity to the local communities who are dependent on the well-being of their land. It is easy for large multinational companies planting monocrops to ignore these problems as their food sovereignty isn’t under attack, and their water rights aren’t violated. But we must understand the catastrophic impact this has, and stand against the destruction of biodiversity, environmental crimes, and continued racism that allows for this to happen.

With the objective of drawing attention to the collapse of the Cerrado that can occur in 20 years, the Day of the Cerrado promises to be eventful. Coordinated by Slow Food Cerrado and Coalition for the Climate SP, on September 11, several associations, movements, indigenous, traditional peoples, and communities will promote a joint action in social media. The participants will post on the social networks several images, texts and videos alerted about the negative impacts of man’s action in the Cerrado. You can know more and support this initiative accessing:

Written and edited by Paula Thomas