Altering expiration dates of spoiled meats, using chemicals to mask the appearance and odor of rotten meat, and bribing inspectors and politicians are just a few of the tactics employed by industrial meat producers and suppliers in an on-going Brazilian meat scandal.

One of the world’s largest exporters of beef and chicken is seeing its largest ever investigation, having mobilized over 1,000 officers around the country. Thus far, the investigation has revealed an extensive network of bribes and kick-backs involving government inspectors who were supposed to be ensuring the safety standards of meat. For its part, the Brazilian government shut down three plants and suspended export licenses for 21 others.

Big, industrialized meat producers have the potential to put the whole world at risk. Brazil exported $12.6 billion of meat in 2016, the bulk of which went to China, the Middle East, and the European Union. But Brazil’s meat also reaches Central and South America, Africa, Asia and Russia. According to AgraFacts, the EU, which imports over 400,000 metric tons of meat from Brazil has reacted by backing a harmonized approach in reinforced checks on all Brazilian meat with a full consensus that there will be a 100% physical check and 20% microbiological check on all Brazilian meat entering European countries. It has not been decided for how long these checks will continue. A total of 45 countries implemented import restrictions from Brazil over the course of the scandal. 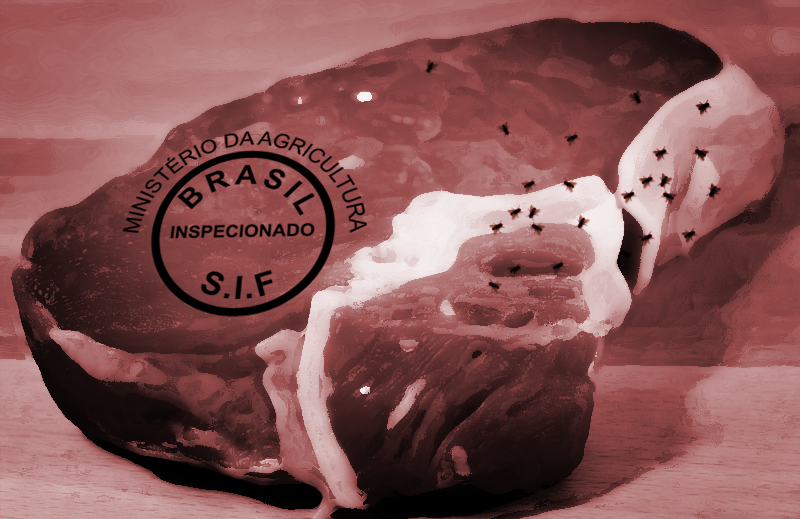 Certainly, once the dust settles, the flow of meat will continue to these countries—until the next bacteria scare or cover-up scandal appears. It is time to ask ourselves whether this is the kind of system we want to participate in. Large-scale industrial meat production is unsustainable for our health, the planet, as well as for the living conditions of farmers and the billions of animals who are bred and slaughtered every year to meet the growing demands of the market. These companies exploit their workers, livestock, customers—and in this case, national governments—in order to satisfy the market’s demand for cheap meat.

According to the Slow Food Association of Brazil, “This scandal shows us the fragility of a system that depends on an oligopoly of producers and processors of meat, which is very powerful both politically and economically. Furthermore, this industry is treating meat merely as a market good, aiming at infinite economic growth, surpassing every acceptable limit.”

However, if we as consumers resolve to eat less meat that is of better quality, we can begin to shift the power away from these corporations and empower worthwhile, small-scale producers who raise and process their animals according to the highest standards. By eating consciously and locally, consumers are choosing to support ethically sound and sustainable practices while reducing environmental impact and staying in control of their own safety.

“We condemn these games of power in which big business dictates politics for their own benefit, marginalizing small-holder farmers and alternative value chains, preventing them from being competitive, degrading the environment, exacerbating conflicts over land, ignoring animal welfare and dignified working conditions. Other systems exist, and are evermore urgently needed.” –Slow Food Association of Brazil