An important step forward for producers of raw milk cheese: these new regulations can help inspire other Brazilian states to adopt similar measures.

On December 13, 2017, the Commission of the Legislative Assembly of the State of Santa Catarina in Brazil approved the proposed law 470,5/2017, which would allow for the production and sale of raw milk cheese and thus legalize the activites of the raw milk cheese producers already present in the State. The law was signed by the State Govenor on January 18, 2018, making Santa Catarina the second State in Brazil after Minas Gerais to allow the production of raw milk.

According to the most recent agricultural census, over the last ten years in the State of Santa Caterina, approximately 90% of artisanal cheese producers have ceased production. The reason for this drastic reduction is that despite having a rich and heterogenous dairy culture (which is not always recognized), the producers are placed within strict limits by health and safety laws. The news of this new law’s approval by the three Evaluating Commissions is music to the ears of both Slow Food and all the other organizations who have worked alongside us: APACO (Associação dos Pequenos Agricultores do Oeste Catarinense); COOPERMAJOR (Cooperativa Agroindustrial de Major Gercino); COMERQUEIJO (Associação dos Comerciantes de Queijo Artesanal); CREDISEARA (Cooperativa de Crédito Rural Seara); EPAGRI (Empresa de Pesquisa Agropecuária e Extensão Rural de Santa Catarina); FETAESC (Federação dos Trabalhadores na Agricultura); the Sial Brasil network; the Municipality of Major Gercino and UFSC (Universidade Federal de Santa Catarina).

During Cheese 2017, the first edition of the biannual Slow Food event to be dedicated entirely to raw milk cheese, the State of Raw Milk cheese conference saw 15 dairy producers from across the world, including from Brazil, meet to share opinions and experiences regarding the production of raw milk, the obstacles they face and the challenges for the future. The battle in defense of raw milk has since produced signifcant results, seeing the producers’ network extended to new countries like South Africa and Argentina. However, the road ahead is long and for this reason the new law in the State of Santa Catarina represents an important victory for artisanal dairy in Brazil and beyond. 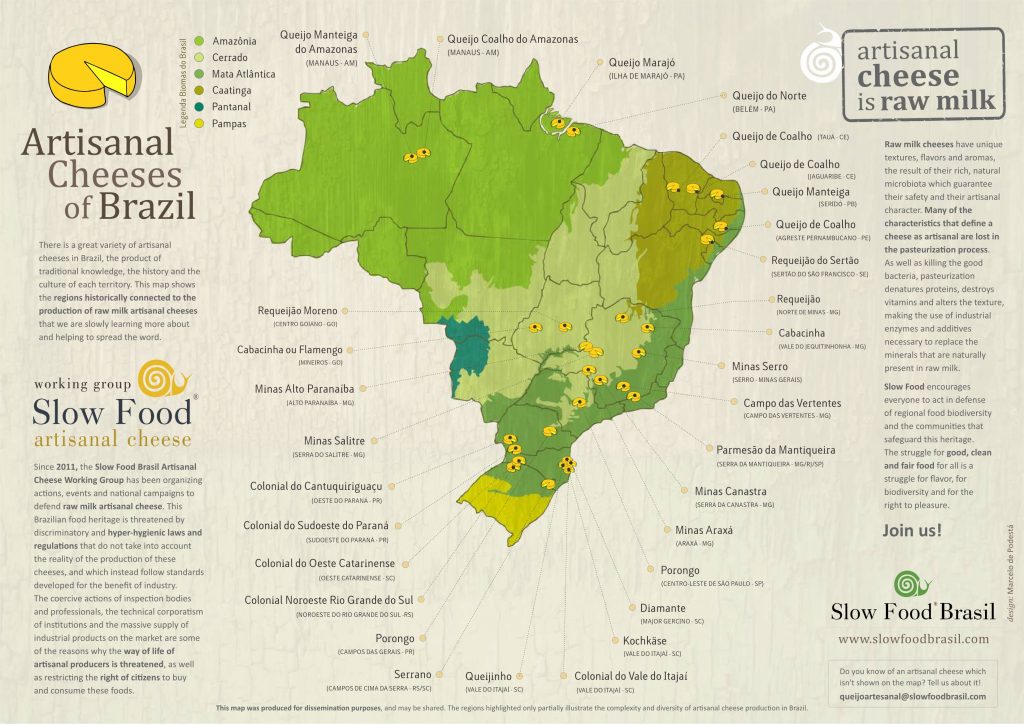 Slow Food Brasil has always been alongside these producers, mapping products at risk of extinction on the Ark of Taste, promoting those same products in the country and at international events, conducting taste education activities and campaigns to change the law. The State of Santa Catarina will soon be able to benefit from a fair legal framework that safeguards the heritage which artisanal producers—particularly women and young people in rural communities—are keeping alive. This should ensure that a rich but delicate part of Brazil’s cultural, social and economic heritage is not lost forever.

UPDATE, January 2018: The Governor of the State of Santa Catarina, Raimundo Colombo, signed new regulations into law which permit the production and sale of raw milk cheese in the State on January 16, 2018. It is a pioneering law in Brazil as it preserves the use of traditional wooden tools in cheesemaking, and has been brought to a fruition by raw milk cheesemakers together with Slow Food.