The indigenous Raizal people from the Archipelago of San Andrés, Providencia, and Santa Catalina have widely used its abundant natural resources to prepare delicious food. Both land and sea products are mixed in many recipes to express the essence of their culture and tradition.

One of these resources is the Black crab (Gecarcinus ruricola). Crab is an important element in gastronomy, economy, and daily life in Providencia. Crab and rice, crab soup, crab patty, crab rondon, are just a few examples of delicious recipes prepared on fireside in the backyard. Poems, songs, sculptures, paintings, and books are other ways to express the importance of black crab for the Raizal people and culture.

However, black crab is running out on the islands. Year after year, the crabs’ migration from the mountains to the sea has been affected, among various reasons, by the increase in the number of vehicles on the islands and the construction of tourist infrastructure in the migratory corridor of crabs.  The return from the sea toward the mountains of the small crabs, which formed a pink carpet on the island roads, seems to be carried by the effect of the wind, tides, and currents to other parts of the world. 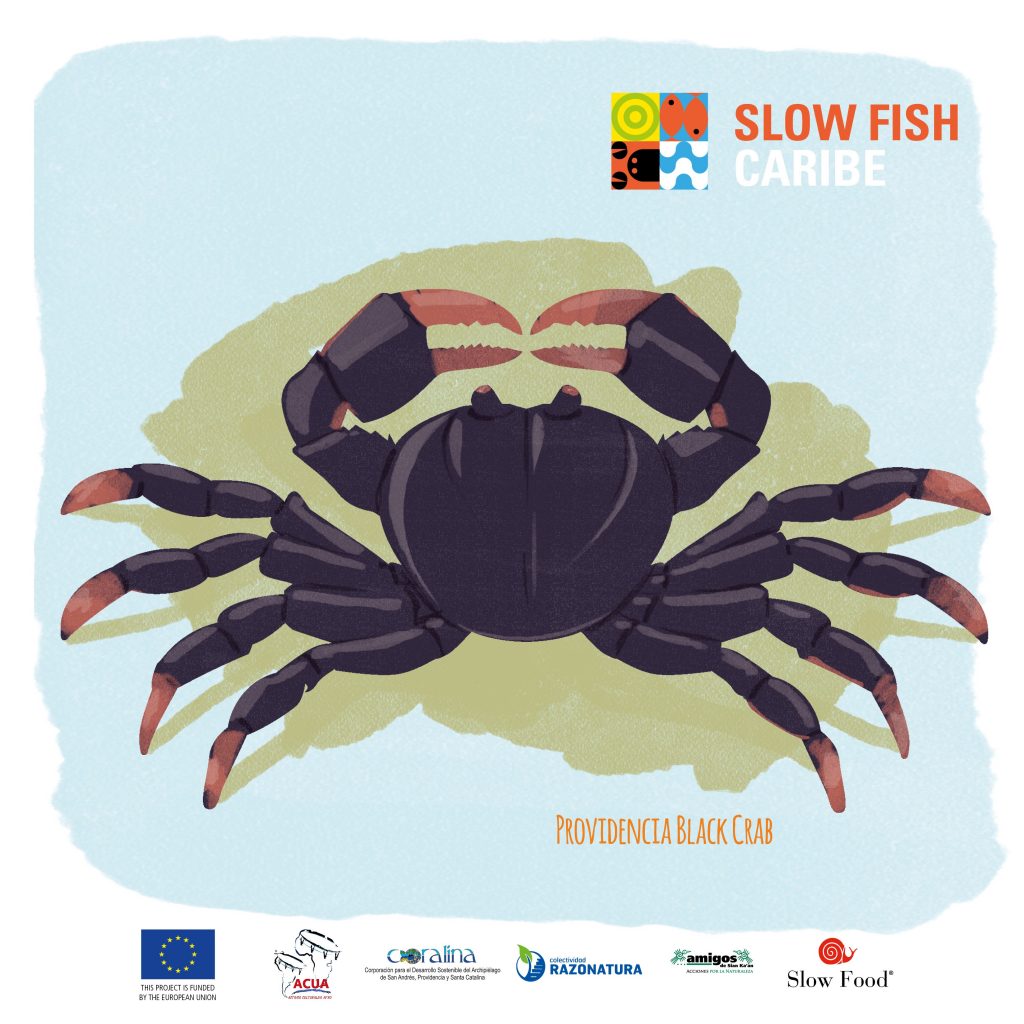 The COVID 19 pandemic overlapped with the annual black crab ban, which runs from April the 1st to July 31th. According to officials of the CORALINA Environmental Corporation, and inhabitants of the islands, this year’s migration, compared to the last four years, was positive due to the arrival of the rains and the number of individuals sighted on the islands. However, the general perception is that there are no as many crabs as before.

Furthermore, COVID 19 affected local tourism, in such a way that the commercialization of crab decreased significantly for this year. However, there are islanders who believe that food sales, exports to San Andrés, and local survival consumption affected the quantities of crabs that were caught. The government restrictions of “stay at home” decreased the number of crabs killed on the road and made the work at CORALINA’s checkpoints easier, but in the context of the pandemic, the protection of this species becomes an even greater challenge if we consider the possibility of an increase in pressure on this resource, due to the decrease in economic income for many families who may not find resources to support their family economy. It is true, “black crab deh don” young people say. “It seems that a resource that we believed renewable and perpetual is running out.”

But, how can we lower the pressure on a natural resource that help meet economic and cultural needs? Slow Food, together with Fundación ACUA and Corporación CORALINA and thanks to EU-funded project “Slow Fish Caribe” and “Empowering Indigenous Youth” project, financed by IFAD, has been working with the local community in order to strengthen economic alternatives for it. Among them, productive projects for the use of local fruits and vegetables for the preparation of sauces and jams. If you want to support local biodiversity and to create initiatives to preserve Providencia Black Crab, join the local Slow Food community to generate positive and lasting change.

*”Black crab is running out” in local Creole.