Why is biodiversity disappearing? Why should we save it? And how can we use our everyday food choices to do so? Our downloadable book entitled Bite Size Slow Food tells all. 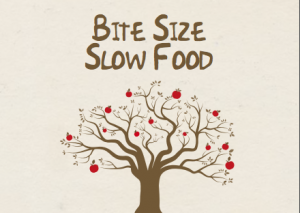 It all starts with an observation about the present day. We are currently experiencing what many are calling the sixth mass extinction. During the fifth extinction, 65 million years ago, the dinosaurs were wiped out. Plant and animal species—as well as fungi, microbes and bacteria—are disappearing at a staggering rate, unprecedented in the planet’s history.

Each year, 27,000 species are lost forever. That’s three every hour. What’s different about this extinction is that now humans are responsible for this global ecological crisis. In 70 years, we have destroyed three-quarters of the agro-biodiversity, which had been carefully selected by farmers over the previous 10,000 years, destroying the equilibrium of nature and turning farms into industrial factories.