Archive » Agriculture and food sovereignty from an Islander’s prospective

In the eyes of many, being born and raised on a beautiful island is synonymous with simplicity and tranquillity. But how easy would it be for the young islanders of Providence and Santa Catalina to live and grow up in an isolated territory?

Roylie Edward Hawkins Hawkins was once a young man and a recognized leader of these islands. Today, at the age of 43, he tells us what it has been like to live in this paradise and why he has resorted to agricultural production in recent months.

Many of us remember Roylie as a young man eager to generate new and revolutionary ideas to promote economic development in the islands. At the “Junin” school in Providencia, he was an enthusiastic and passionate youth worker. He was part of the initiatives that led to the construction of the first youth house in Providencia and the creation of the youth organization Cage & Call, which aimed at safeguarding the young islanders from the clutches of prostitution and alcoholism. 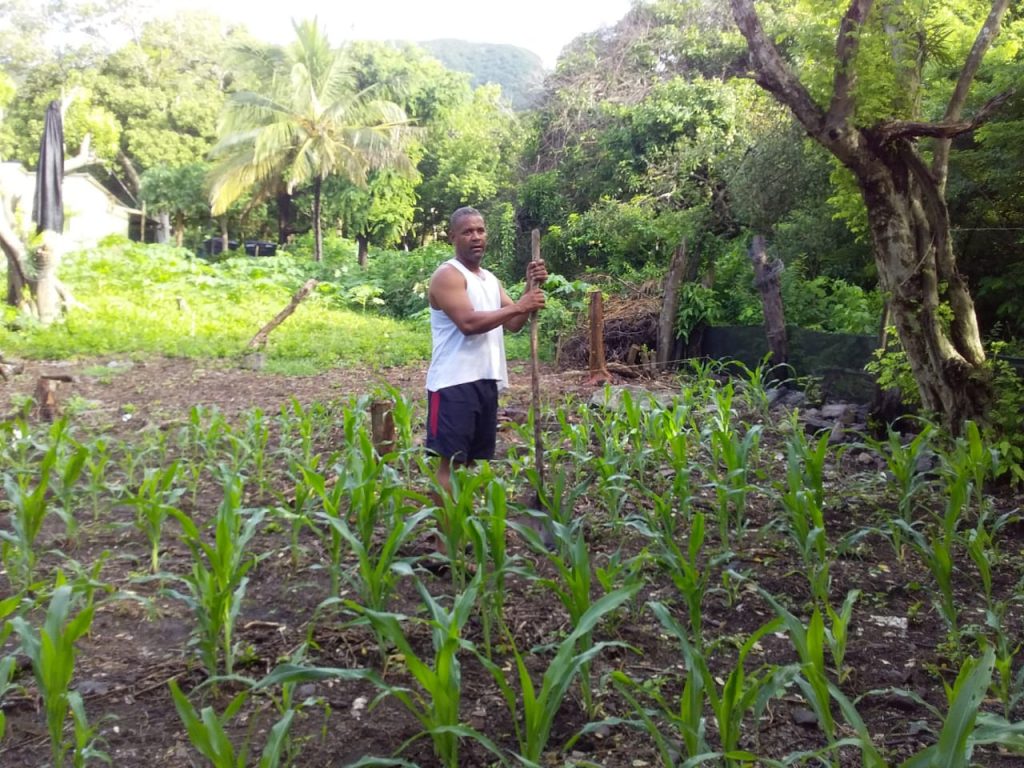 Thanks to his leadership and the work done by the youth on the islands, without even planning it, Roylie had the opportunity to travel to the city of Bogotá to begin his university studies. After finishing his studies in Business Administration, “with a full and anxious heart” and knowing that he was already a young adult and prepared to give his best, he decided to return home. However, “like a piece of ice that melts little by little under the sun, as he tried to propose ideas for a positive change, many people insisted that it was not possible.”

For Roylie it was easier to generate positive change in his community when he was young, but as he became an adult, things became more complicated. He had to access formal employment to survive, and it was no longer easy to transmit and implement transformative actions.

As a result of this situation of uncertainty and unsatisfied basic needs, this young and restless man decided to reinvent himself and spend more time in his garden. Like any entrepreneur, Roylie talks about agriculture in terms of productivity and profitability. He begins this new adventure by planting papaya, but he knows that he must sow enough to harvest, consume, and sell a surplus that will allow him to sustain himself over time. Roylie insists that he has no previous knowledge of maize, papaya, or henbane cultivation, but somehow his family environment provided him with the necessary tools to establish a small crop that provides him with food, surpluses, and satisfaction.

Although he has not been involved in this activity for more than a year, it has been enough to learn first-hand about the difficulties and challenges of farming on the islands. Roylie tells us that water scarcity in times of drought is an issue that worries him a lot, not having an irrigation system doubles the work effort by ten, and he insists on the need for accompaniment or technical assistance to ensure profitable production. “Not knowing the vocation of the soil where you grow, not knowing what nutrients you need for each crop, how and when to apply it,” are just some of the drawbacks presented in this new exercise in providing well-being for his family.

Roylie started growing out of curiosity and today he does it with a business vision. However, in the eyes of his young friends, Roylie does it for pleasure. This perception exists because young islanders do not believe that it is possible to grow food on the islands to generate a livelihood. “Going out to fish if you can generate an income, but farming the land is not so easy or profitable for them. Roylie also doesn’t believe that he should grow crops for pleasure, he wants to produce the surplus needed to improve his family’s economy. But where does the need for food security and sovereignty lie? In our conversation, these concepts did not seem so relevant, since agriculture in the imagination of most people is an economic activity that must generate income to satisfy other consumption needs.

Educating our families and youth on the need for food sovereignty is fundamental to generating well-being. Making visible the importance and existence of a local food system that needs to be strengthened is essential. Seeing food as a political act beyond just eating is urgent. Otherwise, it will be difficult for our young people to get involved in the task of establishing and demanding the necessary conditions to feed ourselves and live healthily, simply, and peacefully.

Slow Food, through “Empowering indigenous Youth” and “Slow Fish Caribe” projects, financed respectively by IFAD and the European Union, is working in Providencia and San Andrés to promote initiatives to strengthen local agricultural experiences and raise young people’s awareness of the importance of recovering the knowledge and products of the local food heritage, thus promoting local food security and sovereignty.