It’s been two years now that the rainy season arrives two months late. As if that wasn’t enough, it finishes earlier, around October, prolonging the drought period significantly. In the beginning we weren’t really aware of what was going on: usually the dry season and the rain season were just as long as each other, meaning June was the last productive month for the fields. Today, however, it’s all changed, and the new seasons have forced us to change our lifestyles, and also our production cycles.

Luckily, around our village, we have always cultivated different varieties, even in small plots, but often the farmers didn’t pay attention to the varieties selected and, even worse, believe that the new climatic tendencies were simply temporary. Today, in the village, many ancient varieties are no longer grown: a large majority of the fields are used to grow cotton and tobacco for export, as well as cassava for the production of garri, which has progressively replaced the subsistence-level farming which was based on local varieties like millet, findi and taro. Together with the other members of the Kouba convivium we are trying to raise awareness among the whole community of the effects of deforestation and climate change. We try to help producers to understand that they cannot ignore the problem, but must confront it systematically, sowing and harvesting earlier and cultivating not just a wider variety of products, with shorter production cycles, but above all local varieties, that are better adapted to the terrain and the temperature, and which need less care and chemical inputs to grow.

I’m not a climate expert, so I don’t know have sure solutions, but I live with the consequences of climate change every day and I know it’s necessary to do something as soon as possible. We risk losing our food security and a great heritage of biodiversity. Starting with the gardens, and those that produce our food, is extremely important.

In our gardens, both those which are part of the 10,000 Gardens in Africa project and those cared for by other Slow Food sympathizers, we teach producer to rotate their crops, to select seeds from local varieties, and to avoid using pesticides and chemical fertilizer and to use only compost and natural products. We also work in partnership with Slow Food Lombardia and the ManiTese association not just for the training of adults, mainly women, but also for the training of children in three primary schools in the villages of Kouandé, Tampègré and Kouba, in the Toucountouna region. All members of the community are enthusiastic supporters of the Slow Food philosophy and thanks to this synergy we have been able to restart the cultivation of products which had almost been forgotten despite how well adapted they are to the local terrain, and which has meant that they haven’t disappeared from the region. In particular, the local women have recovered the seeds of a local cassava variety and they have sown them this year: we hope to create a small business around them, with a short value chain. 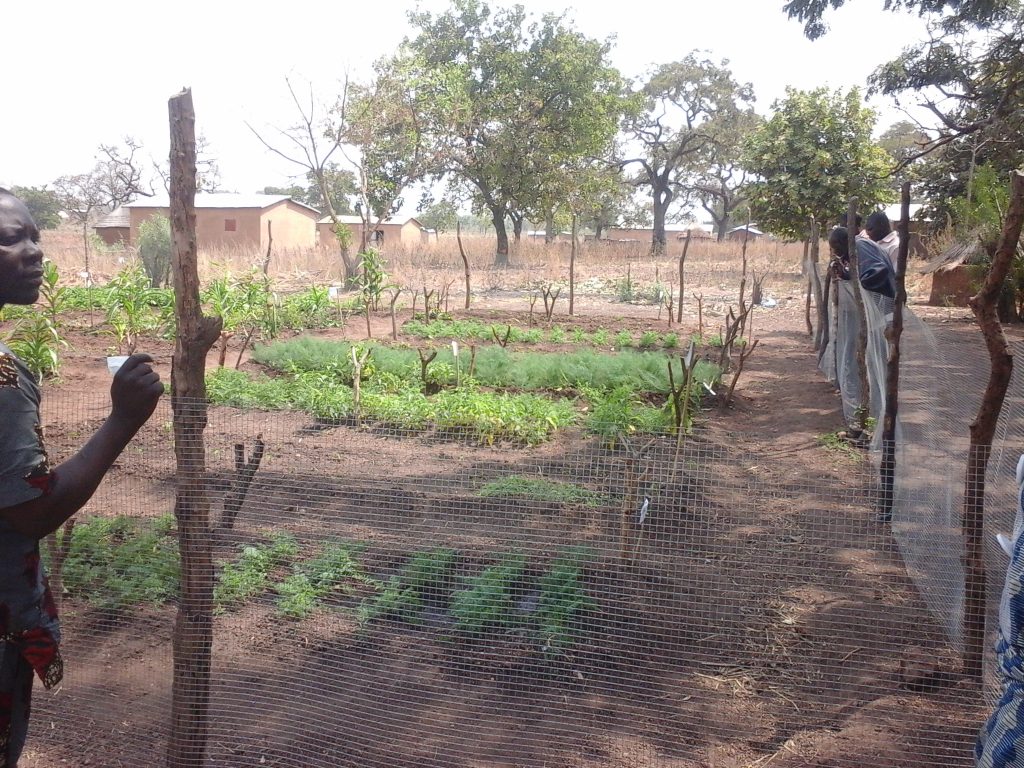 The local authorities are slowly understanding the importance of our work. I believe that the leaders of our countries should be aware not only of the damage that we have to face, but above of the disaster on the horizon. The public institutions need to give a good example of protecting the environment and ecosystems, both in rural and urban zones. And if they don’t, we have to make ourselves heard, change our way of life and be the protagonists of change.

Photos are from the school garden of Tampègré B, Kouba, Benin, from the Slow Food Archive.