Efforts to maintain the biodiversity of bees and the important role of these insects are of great topical interest all over the world. Not only on account of the excellent honey produced by some species but also, and above all, for the vital service they provide to the environment, their pollination helping to protect natural and agricultural ecosystems and, as a consequence, food production. It is estimated that a third of the human diet depends, directly or indirectly, on the pollination of bees and, in economic terms, honey accounts for 10% of world agricultural production. Yet despite their importance, we still know very little about these very special insects. 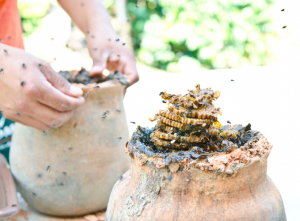 If you asked Brazilians what bees bring to mind, they would invariably answer either “honey” or “sting.” The first thing they think of is Apis mellifera, the honeybee, the species responsible for the production of 1,200,000 tons of honey the world over.

It is interesting to note that the honeybee is not actually native to Brazil, but was introduced there in two distinct stages: for the first time in the nineteenth century by religious orders keen to make honey and wax for candles, then a second time in the 1950s, when an African variety of the same species was imported for scientific research purposes. The two varieties were crossed to produce a “superbee” capable of adapting to different climates and visiting many plant species, which spread rapidly through the Americas. The honey Brazilian families eat today is produced by this “foreign” insect.

What many people don’t know is that long before the colonizers arrived, different species of native honeybees were already being used by indigenous peoples. This specific group, whose scientific name is Meliponinae, is more commonly known as “stingless bees.”

The relatively liquid, acidulous honey of Meliponinae is produced locally on a very small scale according to the presence of one or more species within a given ecosystem. The industrial logic adopted as a development model by Brazilian governments fails to recognize this type of honey as an income generator. Like almost everything else that is craft-produced using local technologies, it is viewed with diffidence, sometimes even accused of being a menace to food safety.

The most serious consequence of all this is that the production of native honey remains unregulated. For the purposes of commerce, only the honey of Apis mellifera is officially recognized. The situation is the same in other Latin American countries such as Mexico, Guatemala, Venezuela, Colombia, Peru, Bolivia and Argentina, where collecting the honey of stingless bees is a traditional activity.

Since 2008, Slow Food has supported the work of native stingless bees honey communities in Brazil, fighting to regulate and raise the profile of their activities. During Terra Madre 2014 the initiative won the support of Mexico, Colombia and Argentina. A meeting of representatives of the four countries led to the creation of a Slow Food Latin America working party on native bees and the drawing up of a Terra Madre motion in support of diversity of skills in connection with the production, processing and conservation of Neotropical native stingless bees and their by-products.

The main aim of the motion is to pressure the competent authorities in Latin American countries into promoting and regulating the by-products of native stingless bees. Care must be taken to ensure that the regulation process takes place inclusively, maintaining socio-environmental diversities and without homogenizing forms of production, which would lead to the loss of the vast legacy of beekeeping skills acquired through the centuries. It will also be fundamental to make sure that the different meliponiculturist communities are not left stranded outside the market.

In Latin America, Slow Food has launched two native bee honey Presidia. The first is in Brazil and protects the honey produced by the Sateré-Mawé indigenous tribe, the second is on the Sierra Norte in Puebla, Mexico. The Slow Food Foundation has devoted a section of its website to bees and their importance for the protection and conservation of biodiversity.