Archive » “Become a Beefatarian”: the absurd EU campaign calling for an increase in meat consumption.

There is perhaps no question on how the climate crisis – and in particular the great impact of food production on global warming – clearly highlights how politics is in fact deaf to the warnings of science. Appeals, studies, research and evidence seem to have no effect on our representatives every time we talk about reducing emissions, protecting biodiversity, working hard not only to save the environment, but also to guarantee a future for all living beings.

We saw this with the vote on the CAP and we live it every day when we hear the beautiful words that call for economic recovery while respecting nature, resources and the whole ecosystem. Nevertheless, we still find ourselves having to yield to the needs of the here and now, without the strategic foresight that should guarantee our survival. This is not a question of continuing to accumulate resources, but rather one of ensuring that these resources do not run out completely.

Unfortunately, it is still the European Union that reinforces this political myopia which, inexplicably, seems to guide European institutions. 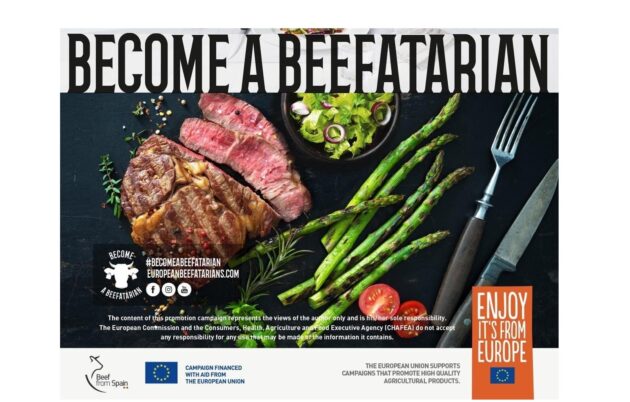 For years, scholars and scientists have been telling us that to reduce emissions and reach the goal of limiting global warming to 1.5 degrees by 2030, the only way is to substantially reduce meat consumption (last study published by Science can be found here), and what do we do?

We spend public money on a campaign that invites us to do just the opposite. The campaign is called “Become a Beefatarian”, a beef eater. This speaks for itself.

If, on the one hand, we felt relieved by the will to safeguard resources put in place by the European Commission with the Green Deal and we strongly cling to the Biodiversity and Farm to Fork strategies, on the other hand we fail to understand what direction those who should be leading us to saving the planet, and indeed humanity, should take. The data confirming how much industrial meat production is devastating soil, polluting groundwater and draining water resources, as well as emitting climate-altering gases more than the entire transport system are already available (for more information visit www.slowfood.it/slow-meat). However, there is evidence that we would like to emphasize once again and we will do so with the words of Jonathan Safran Foer that we were lucky enough to interview on the occasion of the release of his essay where he invites us to reduce the consumption of meat:

We add to this message a fundamental passage: let’s make sure that the little meat we eat is good meat, which comes from extensive farms where a relationship is established between man and animal and where the welfare of farmed animals comes before the race for productivity (for example, wild breeding that respects the environment and animals). We must not forget the key role that animal husbandry – of a limited number of animals which are guaranteed the ability to graze and live according to the needs of their species on meadows – can play in sequestering carbon and in the water cycle.

Working with producers to measure and reduce the impact of production on the environment, it has been shown [1] that the emissions generated by extensive, usually small to medium-scale, farms where animals are fed on biodiverse fodder and hay and whose growth is not driven by high-protein feeds, are generally much lower than conventionally produced meat.

In many cases, grazed grasslands contribute to storing carbon in the soil. On the other hand, in intensive farms, animals, as a result of particularly stringent selections, are fed on a basis of soy and cereals, almost always GMOs, treated in order to avoid getting sick due to over-crowding and weakening due to their unnatural living conditions. It is urgent to reduce meat consumption and replace meat coming from hyper-intensive industrial systems, with sustainable meats on our plate. This is possible.

For this reason it is extremely unfair that campaigns are carried out which place a stable of thousands of heads on the same level as a farm that raises a maximum of a hundred, grazing, presiding over territories and carrying out ecosystem services.

Change happens one step at a time, but it is urgent to get it started.

We are aware that it is not easy to reconvert a European production system that for decades has pushed for meat production, which is held in place by very strong lobbies, but it is time to start, little by little, to decrease.

By supporting those who want to improve their farms or companies in an environmental sense. Financing the promotion of meat tout-court is not only incomprehensible, it is also disorienting and detrimental to European citizens.

Meanwhile, the hope is that the climate crisis will regain its place on the media agenda and especially on the political one. And that the fundamental role that the food system plays in the fight against global warming be reaffirmed.

The role of food and agriculture in the fight against the climate crisis: the appeal of Slow Food and 25 other non-governmental organizations

Together with 25 other European non-governmental organizations, we sent a letter addressed to international institutions (European Union and United Nations in particular) to underline how much the food production system really influences (positively and negatively) the rate of climate-altering emissions. We addressed our appeal to António Guterres, Secretary-General of the United Nations, Patricia Espinosa, Executive Secretary, Unfccc, Boris Johnson, British Prime Minister, Giuseppe Conte, Prime Minister of our country, Ursula von der Leyen, President of the European Commission .

Italy and England are called into question on the front line because they are the organizers of the Cop26, scheduled for 2021 in Glasgow. In December, the Climate Summit awaits us.

The invitation is clear and starts from an assumption that we can no longer ignore:

“Energy, fossil fuels, transport and industry dominate climate discussions and actions. Still, the food system generates around 26% of global greenhouse gas (Ghg) emissions. About 75% of emissions from food production are attributable to livestock farming, including feed production and land use [2] [3]

An ineffective waste of energy given that the global production of meat and dairy products provides only 37% of our proteins and 18% of our calories “we therefore read in the letter, that continues: “We urge you to ensure that food and agriculture are included among the priority areas for discussion at the Climate Summit in December 2020 and at the COP26 in November 2021, given the direct contribution of livestock production to greenhouse gas emissions and its indirect impacts through the exacerbation of the biodiversity crisis ”.

Instead, we ask all of you who follow us, to continue to being informed and expect our policy to be guided by the objective of protecting biodiversity and the environment. And yes, rather than becoming a Beefatarian, you can become co-producers, citizens who are aware of their choices who want to live in a good, clean and fair present and guarantee a future for our children.

[1] There are several studies that go into this aspect, we propose Good for the planet, Good for our health, Life cycle analysis of 6 Slow Food Presidia products and sustainable supply chains, a comparison with similar industrial productions. 101 tonnes of CO2 sequestered on our farm since 2017

[3] FAO, IFAD, UNICEF, WFP and WHO. 2020. The State of Food Security and Nutrition in the World 2020. Transforming food systems for affordable healthy diets. Rome, Fao