With the takeover of Monsanto by Bayer, the world’s largest pharmaceutical company takes control of the largest actor in industrial agriculture.

Imagine that you’re just starting to cultivate a garden, to grow your own vegetables and legumes as a first step towards self-sufficiency, and away from dependence on global networks of industrialized agriculture. If you want the garden to be productive, quickly, you might decide to fertilize the soil to enrich the humus. So off you go to your trusted store of agricultural products to peruse the shelves. If the fusion between Bayer and Monsanto goes ahead as planned, a quarter of all the fertilizer in the world will be produced by the colossus of Leverkeusen and St. Louis. However, fertilizing the land is just the beginning of the journey: next you’ll need to acquire seeds to sow in your garden. In this case, almost a third of the seeds on Earth will be produced by the two-headed beast of Bayer-Monsanto. Now imagine that the season goes well, that the plants grow and flower. Sooner or later, however, a parasite turns up and threatens the entire harvest. You’ll need to find the right product to protect the plants and eradicate the problem. Who can you turn to? Again, you’ll find that a quarter of the products you’ll be able to buy come from Bayer-Monsanto. 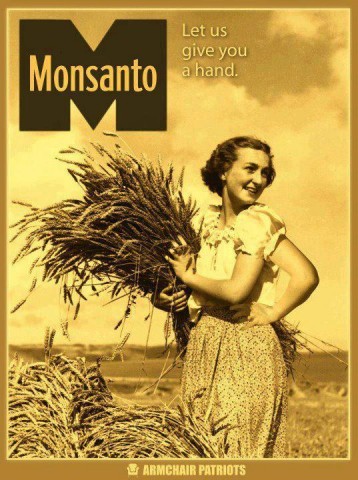 These figures are true for Italy, and in this era of globalization, hold true for the rest of the world. Indeed, in the United States the situation may be even worse.

Such an enormous concentration of capital and power in a such a fundamental sector of the economy, that is, of agricultural products, has never been seen before. That’s without taking into account that other giants of the chemical industry are searching to embark upon mergers of their own. This means nothing less than a dangerous loss of sovereignty. It means that the worldwide production of food will be evermore influenced by the decisions made behind closed doors in the offices of companies whose only goal is the maximization of profit and stock prices. The concept isn’t new, but the proportions are. The clearest and largest ever expression of globalization is at our doorstep.

We can’t help but be deeply worried by these conditions of dependence that are created. We can’t afford to have the future of food in the so few hands, because food is a human right, and indeed, for all living things. On the other hand, it’s worth considering an alternative analysis of the situation: these mergers between corporate giants are also a sign of weakness among them, borne of necessity to maintain profit margins by reducing operational costs. Luckily for us, there are still more than 500 million family business working in agriculture around the world, who are, in myriad ways, fighting to defend biodiversity, promote native breeds, acting locally to develop healthy, clean economies. These millions of people may not count for much individually, but together, they scare the corporate giants. Why? Because they represent an alternative model for the world, and a future where food sovereignty is a widespread reality, where food is not a slave to the whims of a faceless globalized market that is out of control. They are giants, and with the takeover of Monsanto by Bayer, they are bigger than ever, but the small-scale farmers of the world are millions in number and tenacious in spirit.

Adapted from an article by Carlo Petrini for La Repubblica, Italy

We’ll be talking about these themes at Terra Madre Salone del Gusto during the conference “They Are Giants, But We Are Millions” with José Bové, activist, Member of the European Parliament, and one of the loudest voices in the no global movement, who has been on the front line in the defense of farmers’ rights for many years.