“Let’s remember that there are 500 million small family-run or cooperative food businesses around the world that together provide 80% of our food. Yet we only talk of multinationals. And these multinationals  only provide 20% of our food, and they do it badly, while their business models entail oppression and underdevelopment. The Slow Food and Terra Madre network represents that 80% of our food which heals us, nourishes us, which resists. We won’t tolerate genetic manipulation, or accept economic speculation; we conserve our seeds as a common good of the community. We’re forging alliances with the movements in our local areas, the youth who can change the world, we’re listening to indigenous peoples and fighting against those who want to destroy them. We’re fighting to save our ecosystems and the environment. And food, which is the greatest means of bonding we have, should be the symbol of our ability to change the world. So let’s make this revolution with joy! The revolution must be joyous, it must be good, without any difference among ethnicities, religions or languages. Have faith: together we can create the change we want. Be generous: generosity allows us to maintain good relationships, and it’s central to our way of being, it’s what sets us apart. Long live Terra Madre and long live Slow Food!” 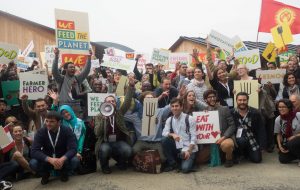 We’d like to begin this new year remembering this appeal by Carlo Petrini to the delegates at the last edition of Terra Madre to approach the challenges ahead with determination, enthusiasm and joy. While it’s true that there are a lot of urgent issues that demand our attention,  it’s also true that we’ll be better able to tackle them if we do so in this spirit.

The climate crisis is real, and we’re feeling it

Something that should terrorize us, but we continue to ignore it at our peril. That’s as true for governments as it is for society at large. It’s up to us to lead by example by changing our habits and behaviors, and acting as if we really care about the house we live in: our planet. Of course it’s much easier to talk about reducing our emissions than actually doing it, but that doesn’t mean there’s nothing we can do. Where to start?

There’s little doubt on this point. Nobody wants to eat food cultivated and gathered by workers in conditions that resemble slavery, or which leaves communities without water (as the Western appetite for avocados does). So how can we be sure that our food is slavery-free, or that the rights of the workers who produced are respected? The simplest way is to cut out the middle-man, and try where possible to meet the people who make your food in the flesh: whether it’s farmers’ markets or artisanal food laboratories, it costs nothing to ask questions and be curious. Think about who benefits if we take no interest in the provenance of our vegetables. In deciding who to give your money to, who to buy from, you contribute to changing the food system.

“If we don’t ask enough questions we risk endangering people’s rights. For example, it’s often said that food must cheap so that everyone can access it. But low-cost food is often an unjust food, which constructs its apparent accessibility by squandering common resources and putting at risk our health: both of the people that produce it and we who consume. It’s an unjust food because it leaves an account to be settled elsewhere, which sooner or later we’ll all pay, but in the meantime great profits are generated and concentrated in the hands of a select few.” (Mangia come parli, or “Eat like you speak” by Cinzia Scaffidi, Slow Food Editore 2014). 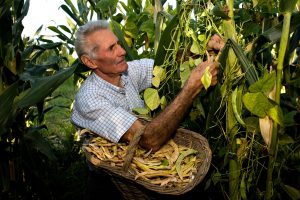 Don’t even waste your crumbs

Over a billion tons of food are wasted every year, along the supply chain and in our houses, and with it we waste energy, time, water, and all the other resources we need to produce it, as well as the resources needed to process the waste. It’s not just our own money we waste, but the future and the well-being of others. We waste nature itself. It’s time to approach the question seriously.

Live a Super Slow year by becoming part of our large global network of local communities committed to defending biodiversity, which constitutes a real solution to the crisis at hand. You’ll be able to take action not simply as one individual but as part of a global movement that is creating a food revolution every day, and doing it with joy. 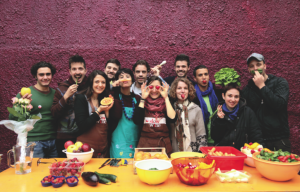