Archive » A Sea of Cultures

From our participation at the march in Milan, “Together Without Walls” on May 20th, to the “A Sea of Cultures” conference in Genoa, on May 21st, and the Migranti Film Festival at Pollenzo from June 9th-11th: we are all migrants, and we believe that cultural and ethnic differences enrich the world. For this reason, Slow Food and the University of Gastronomic Sciences will continue to be committed to this theme.

Slow Fish closed with a conference on the issue of migrants, and the role of food as a common good in solving socio-political conflicts and creating a less fractured society. OrtoColletivo in Genoa, the largest collective garden in Europe, and Slow Food’s 10,000 Gardens in Africa projects were cited as visionary examples on this path.

“We have the power to integrate people in our country,” said journalist Eva Kallinger of Focus magazine in Germany, who has got to know many of the Syrian refugees that entered Germany from Turkey and the Balkans since the summer of 2015. “We can’t ignore other human beings in difficulty.”

We tend to view migrants with negative connotations, generalizing all escapees with illegal acts and terrorism. When a bomb destroys your home though, you have to go somewhere. Naturally, many of them come to Europe as it is a safe alternative. 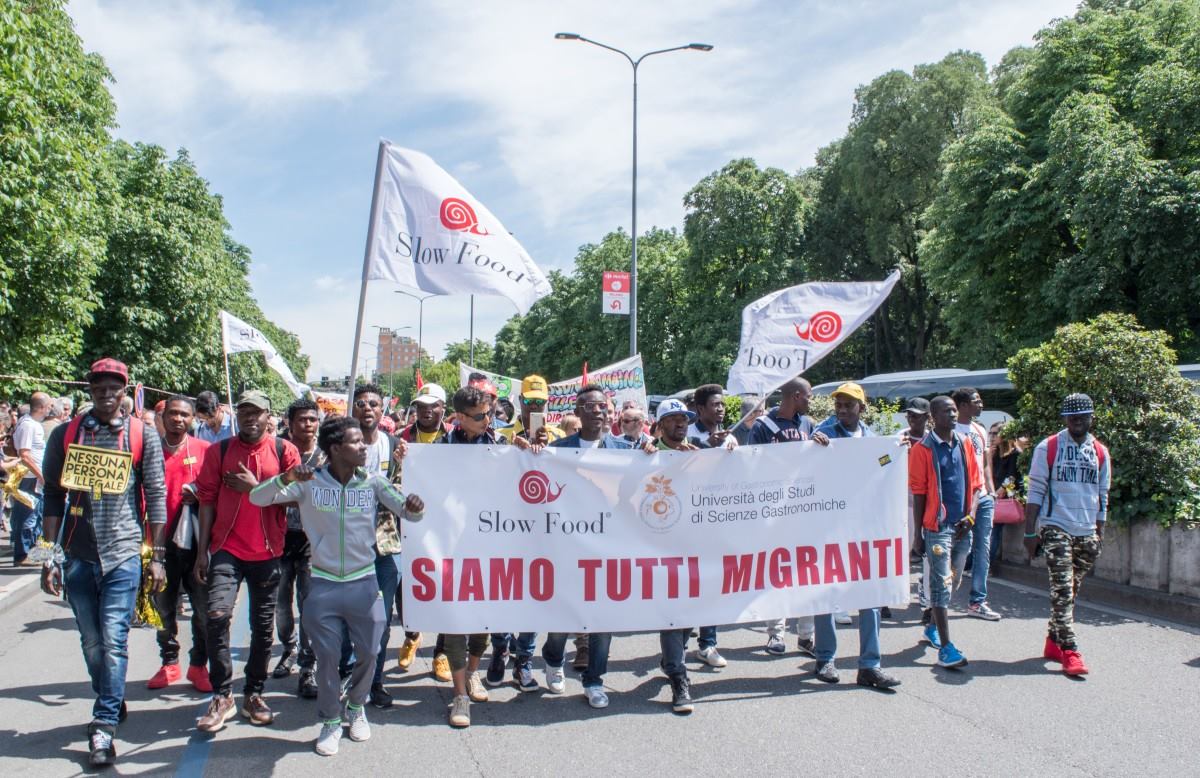 Gaetano Pascale, President of Slow Food Italy, touched on the paradoxes in European society, talking of the complex web of bureaucracy and politics, where solutions are often printed or spoken by many, while real actions to reduce the uneven distribution of resources are much less common, all during one of the biggest food crises that Europe has ever faced.
“This is a society with contradictions, and differences so evident between the privileged and the not. When we talk about the need to open our borders, we need to think about even distribution of our resources – food to begin with.” The only solution is, according to Pascale, to put pressure on our governments.

“It is normal though, to fear strangers,” said Cheikh Guisse from Senegal, who lives in Italy and works to reinforce the 10,000 Gardens in Africa project. Migration is a phenomenon that naturally creates a lot of fear and Europeans were certainly caught unprepared. “But we need to see that there are some out there who live by exploiting this fear,” added Guisse. Indeed, panic and horror are deliberately reinforced to close doors and create more social friction. “True integration comes from wisdom and mutual compromise,” he added.

Andrea Pescina, who manages the OrtoColletivo collective garden, hadn’t planned to involve migrants in the project at all. He simply wished to make use of a productive piece of land he had found. “The capital was there; an empty area capable of producing. This is like having millions put in a box, when you think about it.” The garden project required hard work from a lot of people, and young people from Africa and other migrants have got involved, hands on.

Author and journalist Stefano Liberti emphasized the bright side: the contribution migrants can make with their diverse backgrounds and skills. “Since the 1990s, migration has been perceived as a problem. We need to change this paradigm. If we contemplate on how we want our society to look in twenty five years, we can make a plan towards an objective,” he said, further elaborating on the idea of a detailed integration plan which could be made through specific future goals that involve migrants as active members of society.

Community gardens and solidarity projects that aid ethnic groups and the underprivileged are some of the most basic duties which we all have as members of civil society, not only for the sake of minorities but also in the prevention of food waste, and getting back in touch with the earth.

From June 9th-11th we’ll be hosting the Migranti Film Festival at Pollenzo, part of the Migrarti project.