Archive » A salt storm from the Aral Sea: Let’s save the planet from climate change

It’s raining salt in Central Asia. For the last three days, the west of Uzbekistan and the north of Turkmenistan have been hit by a violent storm of salt and sand that has damaged crops, caused serious problems for livestock farms and created significant respiratory problems for the local people. The crystals of sodium chloride came from the Aral Sea, once the world’s fourth-largest lake, with an area of 67,000 square kilometers, but now almost entirely desert.

The Aral Sea has been one of the most tragic victims of intensive agriculture. In the 1970s, the USSR decided to increase its cotton production, causing one of the worst environmental disasters of all time. The huge demand for water for the crop made it necessary to build irrigation canals that drew water from the Syr-Darya and the Amu-Darya, the two rivers feeding the Aral Sea. As a result, the lake shrunk by dozens of kilometers, creating a new desert that the local people call Akkum, “white sands.” The white comes from salt mixed with the pesticide residues that pollute what remains of the lake. When the wind blows, it can carry this toxic dust for many kilometers, contaminating surrounding ecosystems and causing not only respiratory problems but also cancers of the throat and esophagus.

This is not the first time that a salt storm has hit. Serious storms were also seen in the area in the 1990s. But this time the storm is particularly aggressive, the affected area is particularly vast and in some places the maximum concentration of dust in the air is six times higher than normal. 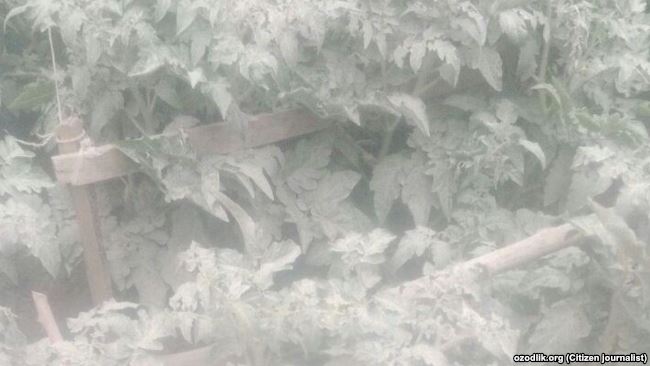 “Since Monday in the capital it’s like living in a fog,” one of the members of the Slow Food Ashgabat Convivium told us. “Sandstorms are fairly common in our area, but we’ve never seen anything like this before. It’s a dry fog, which leaves a salt taste on the lips and the skin, and the air is freezing. Everything is covered in white dust: trees, the ground, houses, cars… It manages to get into the houses even through hermetically sealed windows. The authorities are silent. There have been no official communications from the meteorological service or other government departments: No one is saying or explaining anything. And we don’t know how much longer it will last or what consequences it will have on our health and food production.”

It is still too early to be able to measure the effects, but it is clear they will not be easy to deal with. Farmers are very worried and local experts are talking about the urgent need to clean up crops, soil and pastures to avoid plants losing their ability to grow, soil salinity reaching unsustainable levels and grazing animals ingesting harmful substances. Nothing has been officially declared about the effects on people’s health.

As has been pointed out many times before, we continue to call these “natural disasters” though there is very little that is natural about them. In particular, in this case, the artificial drying of the Aral Sea has led to profound changes to the surrounding climate, of which this storm is just the latest manifestation. Winters, for example, have become increasingly harsh and summers increasingly scorching, with temperatures coming close to 50°C.

Drought, desertification, floods, rising sea levels and marine pollution are threatening the entire planet’s food security. The weakest countries and populations are suffering the most, but the effects of the changing climate are being felt everywhere.

Acting in time on the causes of climate change is the only way to protect our future and the future of our planet.