Archive » A recipe from the Cooks’ Alliance: the Importance of indigenous traditions to Claudia Albertina Ruiz Sántiz

The traditions of the indigenous Maya people have profoundly influenced the life path of Claudia Albertina Ruiz Sántiz, a Mexican chef from San Juan Chamula in the state of Chiapas, taking her from her home region to some of Mexico City’s top restaurants and finally back to her roots. 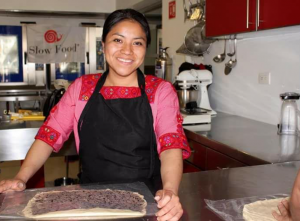 From an early age Claudia challenged the customs of her indigenous community. Girls are often seen purely as future wives and homemakers, and can struggle to realize their potential. «Everyone told me that after finishing school I would have to get married, but at 14 I refused and I enrolled in the Universidad de Ciencias y Artes de Chiapas,” Claudia tells us. “It was a rebellious choice, I admit, and not easy for my family, but it was very important for me».

She continues: «I never lost my respect for tradition, though, particularly in the kitchen. While I was still studying, I tried to find a way to raise the profile of the dishes from the indigenous traditions of Chiapas, which are ignored by the vast majority of Mexican restaurants. When it came to choosing my thesis topic, I realized that I had to write a cookbook in two languages, Spanish and Tzotzil, the mother tongue of the indigenous people of my region, to ensure that the community’s gastronomic knowledge would not be lost».

Her thesis led her to meet Enrique Olivera, the chef at the renowned Pujol restaurant in Mexico City, who invited her to join his team. Less than a week after graduating, Claudia was working in the capital.

«It wasn’t easy in Mexico City» she says. «I came across lots of discrimination due to being a woman and indigenous to boot. But I didn’t give up. I was given an opportunity at Máximo, run by Eduardo García, considered one of the best chefs in Mexico and the world, and then I worked for three years at Estefanía Robles and David Müller’s Restaurante DUO Salado y Dulce. Then in July 2016 I returned to San Cristobal de las Casas and opened my very own restaurant, Kokonò. The name comes from the Tzotzil word for the native epazote plant, used to make infusions».

With her cooking she wants to promote and safeguard the traditional cuisine of the indigenous peoples of Chiapas, offering a menu of regional gastronomic specialities.

«I buy ingredients only from small-scale local producers and I only use seasonal foods, as the Slow Food philosophy suggests. As an Alliance cook I’m part of Slow Food, and for me it’s very important to belong to this network, because it helps me to add value not only to the produce of my land, but also my indigenous roots. Mexican chefs often ignore the ingredients used by the indigenous peoples. We’re forgetting Mexican and Chiapaneca cuisine, because we have foods from other parts of the world available to us. Coffee, cacao and cheese are three typical products from Chiapas, but the region has so much else to offer as well».

Claudia is looking forward to continuing her work, and has many new projects in the pipeline. Here she shares with us two recipes using beans. 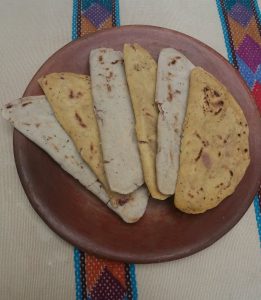 To make the “nixtamalizada” mixture, cook the corn with the lime and the water until the hull starts to come off (about 1 hour). Leave to cool, then clean the kernels before grinding them in a manual or industrial pestle. Once the dough has been made, add a little salt, then flatten balls of dough into tortilla shapes. Fill with some beans and fold into half-moon shapes.

Cook the folded tortillas on a comal (iron griddle) until browned on both sides.

Serve the dobladas with a sauce made by charring (tateman) the tomatoes, onion and garlic, then grinding them in a pestle along with coriander and salt. 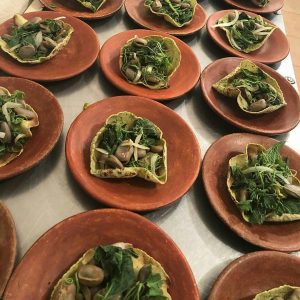 Carefully clean the chayote stems and thinly slice the red onion. Sauté the onion in a saucepan with some oil, then add the beans and lastly the chayote stems. Season to taste then serve on top of a corn toast. Serve with a spicy salsa, cheese and cream.