In 2004, a very special meeting took place in Copenhagen. A group of top chefs, food journalists and other key players in the food world (from all the Nordic countries) met to sign the “Manifesto for the New Nordic Cuisine.” Much of the manifesto was inspired by the principles of Slow Food, calling for the embrace of regional and traditional foods, along with respect for seasonality, diversity, animal welfare, sustainability and artisanal production. Over the last ten years, the manifesto has been used to promote Nordic cuisine in a number of contexts.

Proud of being something special

One of the results of the manifesto has been that the Nordic countries have found an identity, both in diversity and similarity. Some characteristics are common to all Nordic countries, but there are also great differences, for example in the cultural background of food production and traditions in Iceland and Finland. This diversity needed to be nurtured and developed so that every community within the Nordic countries could be proud of having “something special”, from street food to the great success in the Bocuse d‘or.

At the time of publication, traditional products were not highly valued, considered to belong to a dark and destitute past whose image did not correspond to the modern face of the Nordic countries. However, over the past decade, this has changed dramatically: People have become more aware of the value that tradition can have within a concept of modernity. 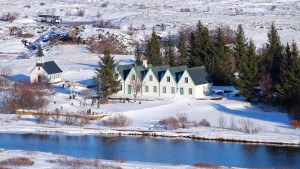 The Nordic countries often use the slogan “small is beautiful.“ It applies to languages, which only a small number of people can speak, but also to the distance between decision makers and citizens, and between consumers and producers. Small is also beautiful when we talk about farms, which are mostly family-owned. Industrial agriculture and monocultures are not predominant in the landscape as is often the case in larger agriculture nations, however pork, chicken and salmon farming, along with a few other industrialized activities are becoming more and more present. Family farming has been the basis of real innovation in the agricultural sector; this includes cheesemaking, the use of wild foods such as berries and fruits, and traditional techniques of processing fish, bread and cereals. Family farming is often synonymous with organic agriculture, which is increasing steadily in Denmark and Sweden.

GMOs have not been a priority for agricultural development in the Nordic countries and the pressure to introduce them is less than in many other places. While many countries are now debating whether to label GMO food and feed, some Nordic countries still do not allow GMO crop field trials and have very strict policies regarding the introduction of GM crops. In Sweden, for example−under the lead of Greenpeace, Slow Food and the Beekeepers Association−protesters remain very active.

With short distances between producers and consumers, and the fact that most farms are still in the hands of families who are open to innovation while maintaining strong local and traditional roots, Slow Food is finding fertile ground in the Nordic countries. A good example is Terra Madre Day 2010, when the Slow Food Reykjavik Convivium in Iceland decided to hold a farmers’ market. Markets had always failed in Reykjavik for different reasons, mainly due to resistance from government hygiene authorities, however on this day, 15 producers set up stalls and were joined by a crowd of 3,000 people. On Terra Madre Day 2013, the market hosted 52 small producers, farmers, fishers, bakers and chocolate producers, and were joined by 16,000 visitors who came here to do their Christmas shopping instead of going to a supermarket.

And it hasn’t stopped there: The Slow Food movement is having a great influence on small producers. Not only do they now have a place to sell and promote their products, they have also formed a network where they can exchange ideas and discover that they are not alone. Quality artisanal products are now popping up everywhere: Sourdough breads which were unheard of five years ago are now baked by small bakeries everywhere, new sustainable fish products are appearing, coffee roasters are moving towards fair trade, sausages are being produced without additives… It’s clear that the entire food community of the Nordic countries is undergoing a transition. We are really cooking up a revolution!