Archive » A Journey Around Italy Via Slow Food Communities

«We all live in a land that doesn’t laugh much. Instead it’s exploited, polluted and wounded in its soul… We want to live in the present and ensure a better world for the generations to come». That’s the mission statement chosen by The Laughing Land for Agroecology in the Valle d’Aosta, a Slow Food community whose name encapsulates its driving spirit and its working method.

The concept of agroecology represents a concern for land that should be left to future generations at the very least unharmed, if not improved—rich in biodiversity, fertile and resilient in the face of threats to come. In a challenging 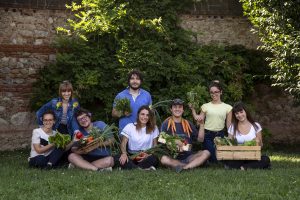 mountainous area in the north of Italy, in the Valle d’Aosta region, a dozen or so producers have recognized the Slow Food community as the best tool to breathe life into their ideals and involve a wider public. They want to share what it means to farm while caring for the environment and nature, without using toxic substances, killing insects or damaging the ecosystem. They want to share what it means to let animals graze on grass, avoiding prepared feed, and most of all they want to share what it means to produce quality food that’s delicious, good for you and fairly priced. One of their objectives, in fact, is to encourage economic practices like swapping and bartering, organizing monthly events that help avoid waste and encourage the valuing of people, rather than money. The community is active in the organization of a farmers’ market in Aosta which it wants to bring into the Earth Market network, and indeed the group’s contribution will go to the global Earth Market project.

So far Italy is home to around 60 Slow Food communities. The model is spreading through all the country’s regions, and is often being adopted by groups who are already working closely with projects and activities within the Slow Food network. The objectives of the communities are mostly linked to promoting biodiversity, strengthening local food systems and educational projects.

At the other end of the peninsula, in the southern Italian region of Puglia, Slow Food is working with networks of migrants. The Andria Tèranga for Integration and Welcome Community has been started on the initiative of volunteers from the Migrantesliberi cooperative and is based in the Santa Maria Goretti shelter in Andria. Here the cooperative helps those in need of assistance, including asylum seekers. The Senegalese word tèranga means hospitality, and the welcome and integration develop out of a coming together and sharing of stories. In these contexts food can serve as an excellent facilitator, leading to the idea of creating of a socially minded restaurant. Now one evening a month the canteen for the needy is transformed into a place where local residents can come and hear the stories of migrants while trying their cooking. There are around 20 volunteers, and around 150 people are hosted in the shelter. Their stories are the focus of dinners during which the hall fills with members of the public who are curious to learn more. A starter, two first courses, a second course and a dessert are prepared and served by the asylum seekers, as a way of sharing something of their lives and not forgetting their origins. Each dinner features two stories, which always leave the audience moved. There is no bill at the end, just donations. Not only has this social initiative worked, it has also spawned two more: the Ubunto food garden, where fruits and vegetables are cultivated and people can learn about food growing and work together, and a textile workshop, which arose out of an interest in making the African cloths used for table linens. The volunteers who have decided to establish the Slow Food community are supporting the 10,000 Gardens in Africa project.

Meanwhile, further north in central Italy, the Slow Food Chiusi Minuta Olive Community in Tuscany was founded on May 4, 2019. It came about almost by accident, after a producer and two restaurateurs visited Terra Madre Salone del Gusto. Having seen the experiences of other communities there, they decided that they could do something to protect biodiversity in their own local area as well. They chose to focus on promoting the Chiusi Minuta olive variety, which has low yields (100 kilos of olives make just 8 liters of oil) and therefore high costs, but also a number of advantages: a high polyphenol content, bringing health benefits and longer shelf-life for the oil, and good resistance to the olive fruit fly and olive knot disease, making it well suited to organic cultivation. This variety has been grown around Chiusi for centuries, and its cultivation might even be traceable all the way back to the Etruscans.

The community members decided that the best way to promote the variety was to produce a 100% Minuta oil, rather than blending it with oils from other varieties, and to involve the entire production and distribution chain in the Slow Food community: from other producers to plant nurseries, oil mills, retailers and restaurants. The decision to use the community model, rather than a generic association or a more complex consortium, came out of the members’ attachment to the Slow Food ideals and a desire to encompass all the people involved in any way with the Chiusi Minuta olive. The community currently has 25 members, including five producers who are either already cultivating organically or going through the conversion process. The community’s purpose is to increase cultivation of the olive while respecting the landscape and natural limits and quantities—which as the name of the variety suggests, must be minute. The community supports the development of the Slow Food Gardens in Africa.