The  recently  published second part of the sixth IPCC Assessment Report (AR6) leaves little room for doubt. Written by 270 researchers from 67 countries, the report is “an atlas of human suffering and a damning indictment of failed climate leadership,” said António Guterres, the United Nations secretary general. “With fact upon fact, this report reveals how people and the planet are getting clobbered by climate change.”

This is not the piece of news we were expecting. We sure know that complex problems do not imply simple solutions, nevertheless, we really want to push citizens and institutions to take any needed and urgent step to face the most devastating emergency of our planet, whose effects cannot be mitigated by vaccines or restrictions.

This is not a matter of switching everything off overnight, but it is crystal clear that something must be done, by everyone: a collective action that may save our planet Earth and its inhabitants all at once. And we proved we can do it.

Thanks to the data that were collected and examined for this independent piece of research, we all know that signs cannot be overlooked and actions must be taken, otherwise that resulting damage will be irreparable and will take place sooner than expected.

«One of the most shocking conclusions drawn by this new publication is that the negative impact of climate change is wider and worse than any prediction», told the New York Times, Camille Parmesan, an ecologist from Austin University in Texas,  one of the scientists who contributed to the report.

The strategy so far consisted in limiting the already  tangible damage, with billions of funds being allocated every year for adjustments such as anti flooding barriers, air conditioners or warning systems for tropical hurricanes.

Transformational measures must be taken

According to the report, the above efforts can be considered as “incremental” all too often. On the contrary, “transformational” changes are needed to cope with future threats, such as fresh water shortages or irreparably damaged ecosystem and, as a consequence, people will have to change the way houses are built, food is made, energy is produced and nature is protected.

The possibility to be properly fed is already under pressure, due to the extent of current global warming. Meanwhile, food is overproduced beyond our needs and crop yields are being increased unnaturally – climate change is thereby slowing down the growth rate, a worrying trend putting future food supplies at risk. This is happenning as the world population keeps growing, so as to reach 8  billion people. 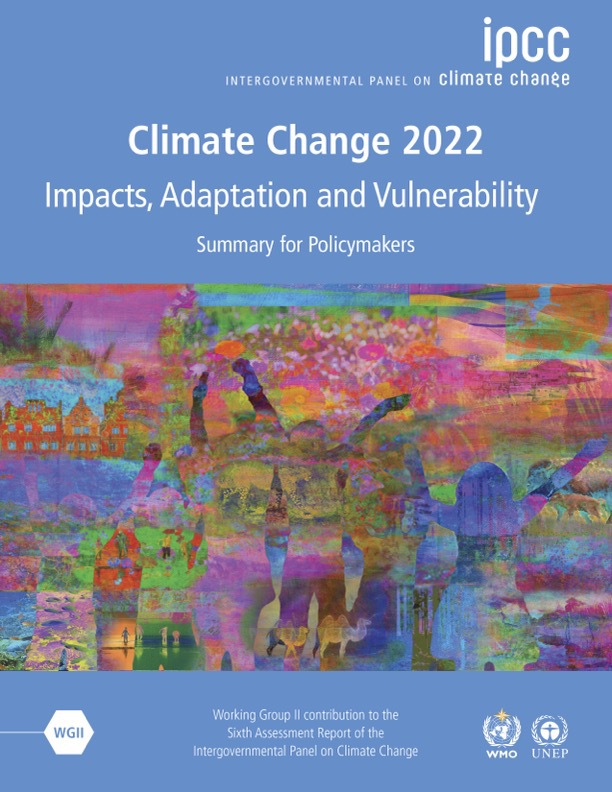 The point of no return

A global warming that goes past 1.5 °C – something that may take place over the next few decades – would make 8% of agricultural soil unsuitable for growing crops. Coral reefs, protecting coastlines against storms and supporting fishing activities for millions of people, will be more frequently bleached due to ocean heat waves and will shrink by 70-90%.

No use going into a detailed description of the damages with a 2°C temperature increase, since previous reports cried out loud that a 1.5°C rise is the point of no return. However, it must be pointed out that the Mediterraean  Sea is one of the most endangered areas. The reports reads :

«Prolonged dry periods may lead to irreversible aridity, especially related to the highest global warming levels. In Europe, for instance, this aridity may affect a growing part of the population: with a 3°C increase compared to preindustrial level, 170 million people are expected to experience extreme drought. In case of a 1.5°C  warming increase, the people risking to face this issue would drop to 120 million[…].

And poor nations are far more exposed to climate risks than rich countries. Between 2010 and 2020, droughts, floods and storms killed 15 times as many people in highly vulnerable countries, including those in Africa and Asia, as in the wealthiest countries, the report said.

“Where highly vulnerable populations face hazards such as extreme weather, – explains an interesting article of The Economist – climate change is contributing to humanitarian crises. People in all regions of the world are being displaced. The report highlights worsening food insecurity and malnutrition wrought by droughts and floods in Africa and Latin America. The report does not, however, see much of an impact from all this on violent conflict, but warns of risks from “maladaptation” in which efforts to address climate impacts do more harm than good. One example would be building a sea wall around a city. Doing so protects the residents from rising sea levels and storm surges in the short term. But it might also change the pattern of currents by the coast, creating worse erosion elsewhere. Such measures can also create a false sense of security: in the floodplain around the Jamuna river in Bangladesh, there is evidence that the presence of levees attracts more people to live there, ultimately increasing the number of deaths that result if a levee were to break. Starting an irrigation system in an area where the rain can no longer be relied upon to grow crops could lead to overconsumption of river water, leaving people downstream with less. “In choosing the right solutions, we need to be thinking about more than just one climate hazard and also about the range of side-effects of the interventions we undertake” says Maarten van Aalst, director of the Red Cross Red Crescent Climate Centre, and one of the report’s authors.

Energy, fossil fuels, transportation and industrial production lead the debate and the actions on climate. The food system though is one of the main drivers of climate crisis, soil exploitation, pollution and depletion of aquatic and terrestrial ecosystems. The Ipcc report claims that emissions from food system, soil exploitation, agricultural activities, packaging industry and waste management, amount to 11-19 billion tons a year. This has been repeated so many times, it counts for one third of global emissions.

Globally, food systems are responsible for 60% of territorial biodiversity loss, around 24% of greenhouse emissions, about a third of degraded soils and full exploitation of at least 90% of commercial fish populations. Researchers predict that even if fossil fuel emissions were halted now, emissions from the world food system would make it impossible to reach current international climate change targets.

Improving agricultural activities, as well as food production and availability, and changes in daily diets are no longer an option, they are urgently needed.

What can be done, there is a glimpse of hope

And now we get to the part where a glimpse of hope is restored. Something can be done to cope with the changing climate. This report goes into the potential that nature has, not only to limit climate risks, but to improve people’s lives too.  «Healthy ecosystems are more resilient vis-à-vis climate changes and provide essential goods, such as food and water», writes Co-chair of IPCC Working Group II, Hans-Otto Pörtner.

«If human societies are able to recover degraded ecosystems and manage to effectively preserve 30-50% of terrestrial, fresh and salt water habitats, they will take advantage of nature’s ability to absorb and store carbon, to accelerate progress towards sustainable development. However, proper funding and politcal support are needed to achieve this goal.

Slow Food works to seek to address the intersection between the food system and climate change and to describe possible pathways for tackling the climate crisis through the adoption  of environmentally friendly practices along all stages of the food supply chain, following a “seed to landfill” trajectory.

Objectives such as protecting biodiversity, fighting climate change, developing local economies and small-scale production and safeguarding local knowledge, traditions and culture should not be interpreted separately.

At the base of all Slow Food projects and programs there is the promotion of fair and sustainable food systems that prioritise local low-impact production systems and that respect seasonality and the interconnectivity of ecosystems. Based on agroecology, they do no harm to the environment and preserve and restore soil, freshwater and marine resources; they respect animal health and welfare; they help mitigate climate change and adapt to its impacts; they not only avoid biodiversity loss but, promote regeneration; they prevent and minimize food losses and waste, disposal of which is integrated into the regenerative cycle.

Fundamental, the role of communities, as for example in the Foodnected project, but also, let’s keep in mind that every single one of us can make a difference, starting by making some changes to our everyday shopping. The combined effect of all of our choices together can push governments and the international community to finally start heading down the alternative route that our planet so desperately needs.

We have gathered World Leaders at Cop26, for them to consider Slow Food’s four-part response to the climate crisis, something that we really wish to happen:

We need to deal with the root-causes not the effects, guide decision-makers’ choices, make the necessary  sacrifices, save our planet.