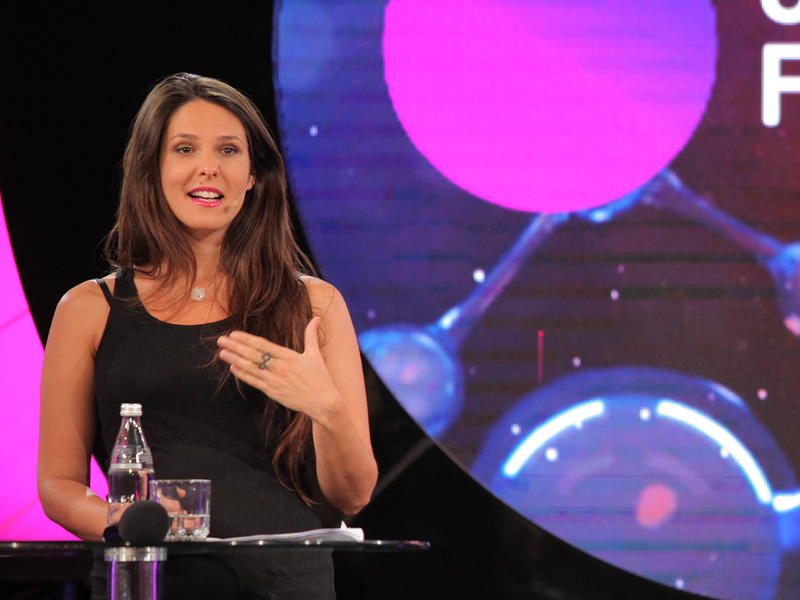 Soledad Barruti is an Argentinean journalist and author of Malcomidos: Cómo la industria alimentaria argentina nos está matando, a book denouncing the food industry. Together with Carlo Petrini, in January she took part in Congreso Futuro in Chile, one of the most important Latin American events on the future challenges facing humanity.

Here she answers some questions from us.

What problems and contradictions do you see in the current food system?

The food system is a faithful reflection of the worst aspects of our time. To start with, it’s based on ignorance. No consumer would consciously buy a food produced at the cost of torture, poisoning and destruction, which damages people, animals, plants and entire ecosystems. And yet this is the reality today, at all levels. If the supermarkets still do good business and are always full of customers, if brands still communicate credibility, it is because the shrieks are silenced, because the images of horrors need to be sought out. Nobody is actually aware to what extent feeding ourselves and our children with this system is harming all of us, and information is a luxury. We prefer to watch advertising, which does not give us a moment’s peace and ends up rendering us deaf and blind.

Secondly, the food system is maintained thanks to fear. Fear of what? Of theorems with no scientific basis and no accuracy that everyone goes around repeating. Like, “If we stopped producing with this system, millions of people would die of hunger.” Or, “The only solution is to increase production, there’s no alternative.” “It’s the only way to feed the world,” they say, as though it was working. As though there were not 850 million hungry people in the world, as though a third of all food does not end up in the trash, as though it was not based on a suicide pact made up of the impoverishment of resources, the extinction of biodiversity and the suppression of human cultures. My response is that if there really is no other way to feed the world, if we are really sure of this, then let’s just switch off the light and forget about it. Because if a creative being like a human cannot do better than to ransack the planet in order to fill the supermarket shelves with junk, then it’s just not worth it.

What is the situation in Latin America in particular?

In Central and South America the most serious phenomena are the transformation of the agricultural landscape and the surrendering of taste to the industry of over-processed foods. The big multinationals see in this region a paradise of economic opportunities: fertile lands for planting monocultures, cheap labor, consumers to be snared with promises of progress and formulas that create addiction. Success all down the line! With the arrival of industrial soft drinks, entire communities are no longer drinking water or preparing their traditional beverages. New kinds of businesses are taking the place of traditional food places, and soon we will see quality ingredients disappear too, replaced by industrial surrogates like transgenic corn, which is ousting real corn. It’s a tragedy, a public calamity. And the worst thing is that this calamity knows no limits or bounds, just like the world of business. Obesity, diabetes and heart disease: We’ve never been less healthy than we are now. And we’re seeing the most harmful effects in the places where real food should be as accessible as possible, like in indigenous communities. You understand that all of this is taking place with the complicity of governments, who in the big brands see only opportunities for economic development, or strategic partners willing to support the expansion of certain policies.

It’s a difficult, indeed impossible co-existence, because industrial agriculture uses brute force to suppress any resistance, swallowing up food gardens, dispersing farmers, forcing producers to surrender, reducing nature to its poorest expressions. For now we continue to boast a variety and diversity of foods that makes travelling in our countries an unforgettable gastronomic experience, but this wealth is being lost. And things will continue in the same way if we do not soon find a way to keep the system in check.

On some days I feel all is lost, on others I’m more hopeful. Particularly when I see the tenacity, determination and courage of this country’s indigenous people and farmers. Women and men who refuse to give up their place in the world, who have decided to do what they know and love, in order to defend the land. They have made extraordinary achievements, exposing themselves to terrible risk, because over here defending the land means putting your life on the line. And yet there are more people resisting than those who are giving up. And this obliges those of us who support their cause with all our might to stay confident.

The first step towards change, I believe, lies in providing people with more accurate information. We need to show consumers that behind the captivating façade of packaging, behind the promises of development and the big projects of industrial agriculture, lie only violence and misery for all. We need to make it clear how high the stakes are: our health, nature, beauty, empathy, pleasure, taste. Because not only is there an alternative, but that alternative already exists. We live where some of the most important foods for humans originated, spreading from here around the world: corn, cacao, tomatoes. All of this was possible thanks to the development of extraordinary skills, and we still have those skills.

We need to give a voice back to those who really know how to produce food. To allow them to explain themselves, to tell us about what they are doing. To keep them in contact with the land. To transform us citizens into co-producers. To pay a fair price. To value these products as they deserve to be valued.

What can the role of movements like Slow Food be in all of this?

I think that Slow Food has created a space of visibility for farmers, indigenous populations, fishers, gatherers, the guardians of seeds, the women of rural areas, and this is already a lot. Because it could be a hedonistic movement, focused on gastronomic enjoyment, but instead it takes a political position, when many gourmets do not like to talk about politics. Slow Food says: Do you want to eat well? Then you need to make sure that the countryside, the forests, the mountains and the deserts are not depopulated, that the producers and not just the product are made the center of attention. Then of course there’s always some who come to the movement in search of a good cheese or a good wine, but, along the way, they come into contact with a whole series of information that, at the very least, will make them curious, will communicate doubts, will invite them to relate in a more human way to gestures that many have reduced to mere consumerism.

Where does your interest in food come from? How did you have the idea of writing your book, Malcomidos (“badly fed”)?

My relationship with food has always been based on the pleasures of the table: I love food and I hate eating bad, tasteless food. It’s depressing. I can’t stand that all too often all you can find are industrial sandwiches. My link with food is undoubtedly matrilineal in origin: My maternal grandmother always cooked divinely and everyone appreciated her for it. She cooked dishes that were simple, but extraordinary. So I grew up giving great importance to food. And I always liked being in the kitchen, from the first years of school. Making myself something to eat, discovering new things. My mother is a very curious woman: unusual foods, recipes using rare ingredients, organic vegetables, etc. At a certain point I managed to merge my passion with my job. I’m a journalist, I like to investigate, I’m a curious person by nature. And food production is the hub around which all the main problems of our time converge. It’s fertile ground, a theme that makes it possible to examine the world from every perspective: biology, history, politics, economy, culture, social sciences.

What should we expect from you next? What aspects are you concentrating on now?

The next book will be a sort of sequel to the previous one. With Malcomidos I tried to explain how the food production system works in Argentina. How, when and why we became producers of genetically modified soya for export, a monoculture to which we are sacrificing 60% of our fertile land. What is happening to rural life, to the people who live in the countryside, exposed to almost 400 million liters of agrichemical products a year… This time I’ll be looking at all of Latin America: I’m interested in focusing on the changes that are taking place in our continent and the struggles going on to defend it, making children the true protagonists of our age. I believe that it is them most of all who will pay the price for this current food system.

Attack on freedom of expression: Publisher Jacob Radloff and author Alexander Schiebel in court for criticizing the use of pesticides

21.10.2020 – The attacks on freedom of expression in Europe’s largest apple-growing region of South Tyrol  are reaching a new level: Today , the Bolzano Regional Court will hold a hearing on whether charges will also be brought against the managing director of Munich-based Oekom, Jacob Radloff. Radloff published Alexander Schiebel’s book “The Miracle of …

The Women of Chiapas Protectors of the Milpa

The women of Chiapas have preserved for centuries the ancestral knowledge of La Milpa, a valuable pillar of agriculture that has provided the community with food and cultural sovereignty. The Presidium of La Milpa celebrates their invaluable contribution to this tradition, fostering seed preservation, soil health, and environmental well-being as a foundation for their community. …

Retracing the Steps of Walden

“We arrive at home in the evening, before my eyes there was a fabulous landscape, detached not just from the plains but the entire world.” We begin today not with the protagonist of this story, but the place where she lives, as described by the poet Attilio Bertolucci in an interview of the 1980s. We’re …

Four Recipes with One Mission: Food for Change

Agroforestry, regenerative agriculture, food sovereignty, traditional knowledge, indigenous ingredients, and sustainable fishing techniques are some of the themes increasingly influencing menus around the world.  Restaurants play an important role in the food system, driving demand, changing people’s perceptions of food, and pushing food trends. Chefs nowadays are diving deeper into the impact of their choices, …

Terra Madre Brazil 2020: a new chapter for good, clean and fair food for all

Adapting is necessary, and talking about family and peasant agriculture, biodiversity and Brazilian food culture is an urgent issue. These are the main topics for discussion in the 3rd edition of Terra Madre Brazil (TMB), which will have an online format and will bring together various actors in the Slow Food network mosaic, such as …