Archive » 4,000 Kilometers from Farm to Slaughterhouse

Four thousand kilometers. That’s the distance travelled by hundreds of thousands of sheep, cattle and goats from European farms to slaughterhouses in Turkey, a journey marked by extreme suffering.

An investigation carried out on 93 investigative days over five years by the animal-rights associations Eyes on Animals, Animal Welfare Foundation and Tierschutzbund Zurich with the collaboration of Compassion in World Farming revealed that at least 70% of the trucks that take live animals from the EU to Turkey violate EU Council Regulation 1/2005 on the transport of live animals, even though rulings by the European Court of Justice demand respect for minimum welfare standards even when animals are traded in countries outside the EU.

This figure reflects an on-going series of systematic violations that cause tremendous suffering to thousands of animals. During the period under investigation, from 2010 to 2015, over 900,000 sheep, 850,000 cattle and 5,000 goats were transported by truck from the European Union to Turkey. These exports are on the rise, as is clear from the fact that in 2015 they were up by 39% from the previous year. This type of senseless transport is allowed because it is in the EU’s economic interests to support the internal market in livestock animals by seeking to maintain stable prices. After years of negotiation, in 2010 the EU finally convinced Turkey to buy European animals. 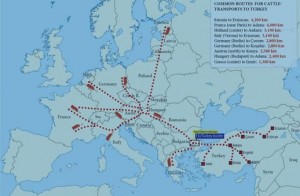 During the 93 investigative days, the activists inspected 352 trucks in Kapikule, on the border between Bulgaria and Turkey. Of these, 247 from 13 different European countries (including Italy) were in violation of European laws on animal transport. Some of the most common stress factors identified during the inspections were overcrowding, lack of water and food, insufficient headroom, unacceptable hygiene conditions, temperatures higher than 30°C and the use of inappropriate vehicles. According to the dossier, animals that are wounded, dying, sick and in labor are left to their fate. Dead animals often remain on board the trucks until they reach their destination.

What’s more, the long journey time is compounded by the time spent waiting at customs for paperwork to be processed. Often the animals spend days stuck at the border, on board the trucks, in extreme weather conditions.

Kapikule is not equipped for the import of live animals and the delays experienced at the border go against European regulations that specify that animals must be unloaded and given a 24-hour rest, so that they can feed and drink after 28 hours of travel.

The results of the investigation can be found in a report over 1,000 pages long and in a video that will be presented to the European Commission and the member states.

Slow Food adds its voice to the demands of European animal welfare organizations, long at the forefront of the issue, that the law be respected.

We’d also like to know where the sense is in a system of industrial livestock farming that involves transporting animals as much as 4,000 kilometers or more, with repercussions for traffic congestion, pollution and increased CO2 emissions as well as the effects on animal welfare.

You can demand the end of the export of live animals to Turkey by signing the petition.