Terra Madre Altai 2019, a unique event dedicated to the food, culture and tourism of Russia’s Altai Mountains, took place in the city of Gorno-Altaysk from August 8 to 11.

Farmers, food producers, beekeepers, cheesemakers, cooks, tourism agents, policy decision-makers and food activists from around the local area gathered for the event, which attracted 30,000 visitors and was inspired by Yulia Fominikh, spokesperson of the local Slow Food Community and a member of the Slow Food Cooks’ Alliance. 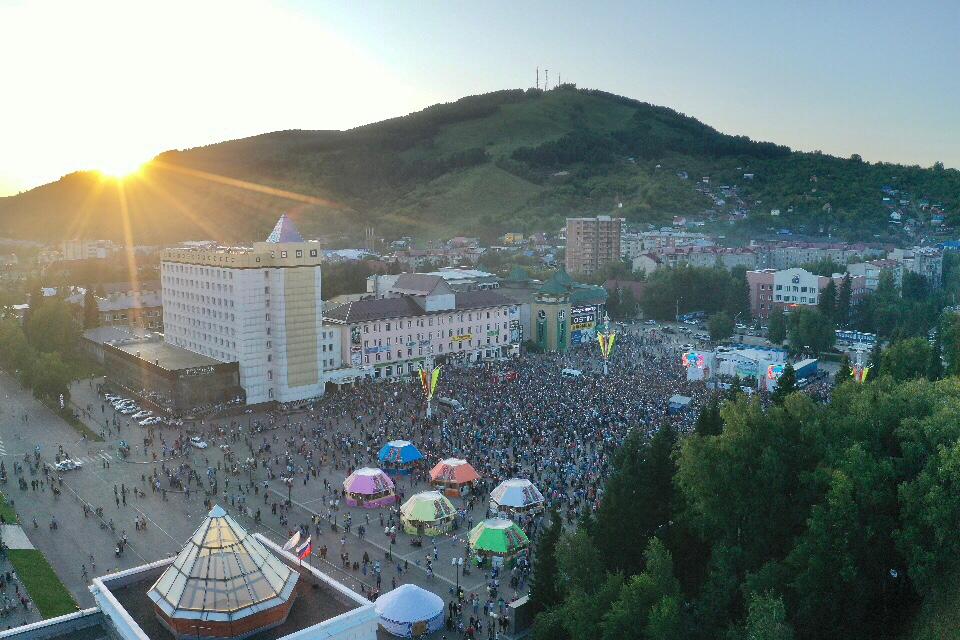 “Thanks to our shared efforts, we’ve now written the history of the Terra Madre Altai 2019 festival,” said Yulia. “The theme was love of the Earth: the role and value of those who care about the planet every day—farmers, shepherds, artisans, fishers—all those who respect the traditions and culture of the peoples of the Altai Mountains.”

Slow Food can be a vital tool for the development of sustainable tourism in the Altai Republic. One of the goals of Terra Madre Altai is to help paint a picture of the Altai Republic as a hospitable and unique tourist destination, developing a positive image both in Russia and abroad. This mission was strengthened thanks to the participation of the Federal Tourism Agency, the federal project “Gastronomic Map of Russia” and representatives from the regional authorities. 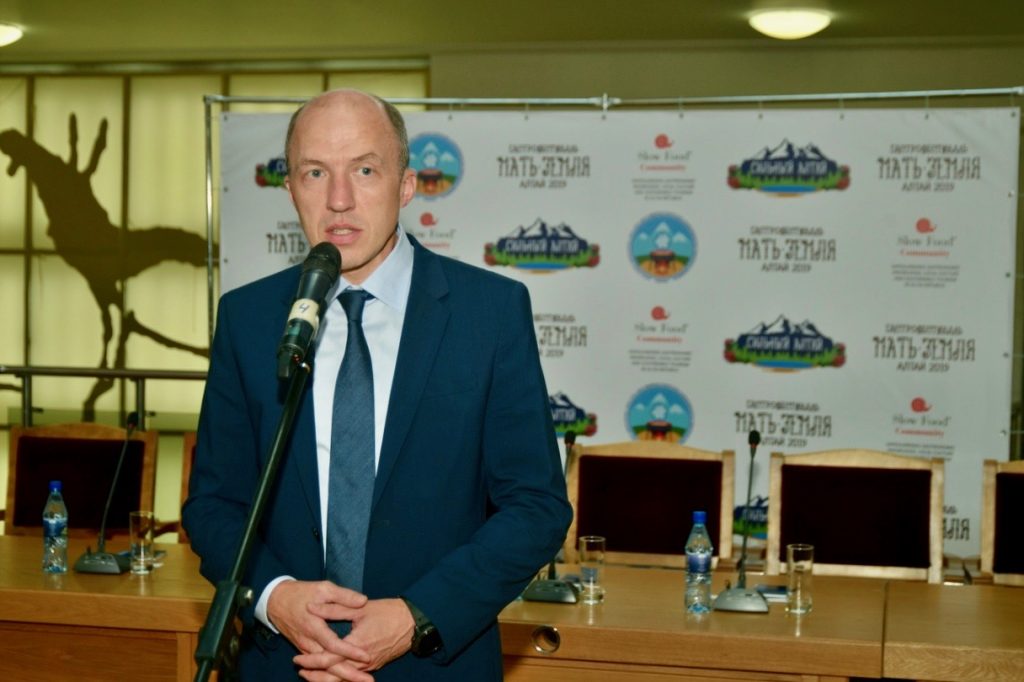 The event was officially launched by the Acting Head of the Republic of Altai, Oleg Khorokhordin. “What is the strength and competitiveness of the Altai Mountains?” asked Mr. Khorokhordin. He continued, answering: “Unique regional products and specialties based on local natural raw materials. And traditional dishes prepared with these products by the hands of cooks—heirs of ancient culinary traditions, their knowledge enriched by the use of modern technologies. In the future, this festival will become one of our brands, an important tourist event attended by guests from all over Russia and from abroad. One of the most important outcomes of the festival is that a large team of farmers, producers, chefs, restaurateurs and artisans has formed in the Altai Republic. The end of the festival is only the beginning. We look forward for the next edition of the event in 2020.” 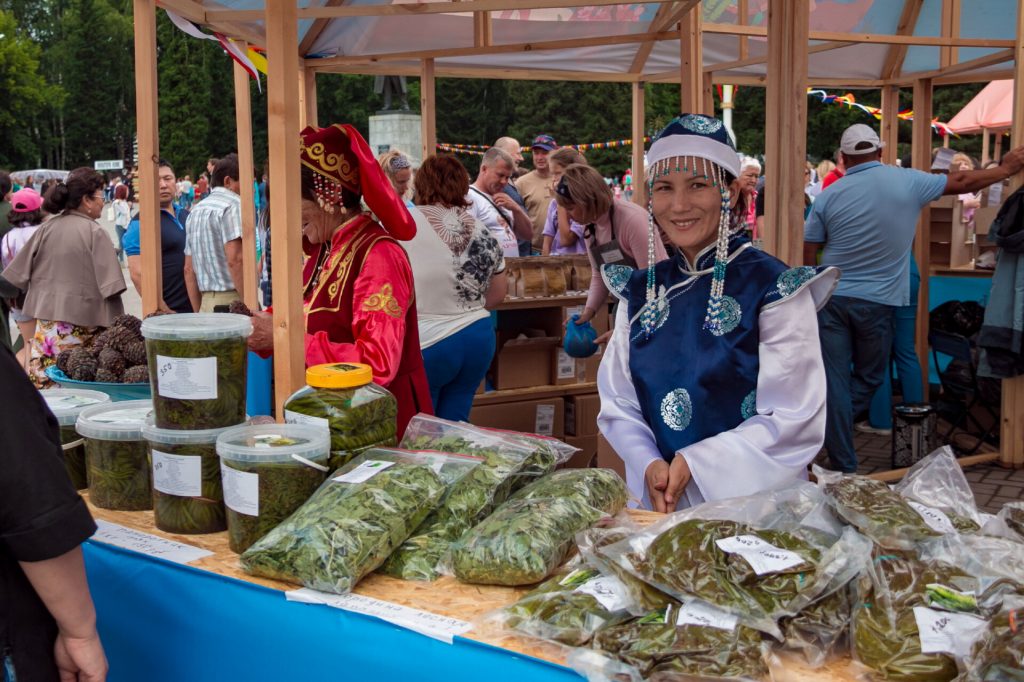 The festival brought hundreds of regional products and specialties to the city, as well as authentic dishes from the local cuisine. The Earth Market, hosted in 10 traditional Altai dwellings, was a showcase of extraordinary gastronomic diversity presented by dozens of small-scale producers from all over the Altai Mountains. It became a meeting place for thousands of visitors and artisans, farmers, cooks, manufacturers of natural products. Everyone was able to see the producers’ faces, hear their stories and sample and buy their products. 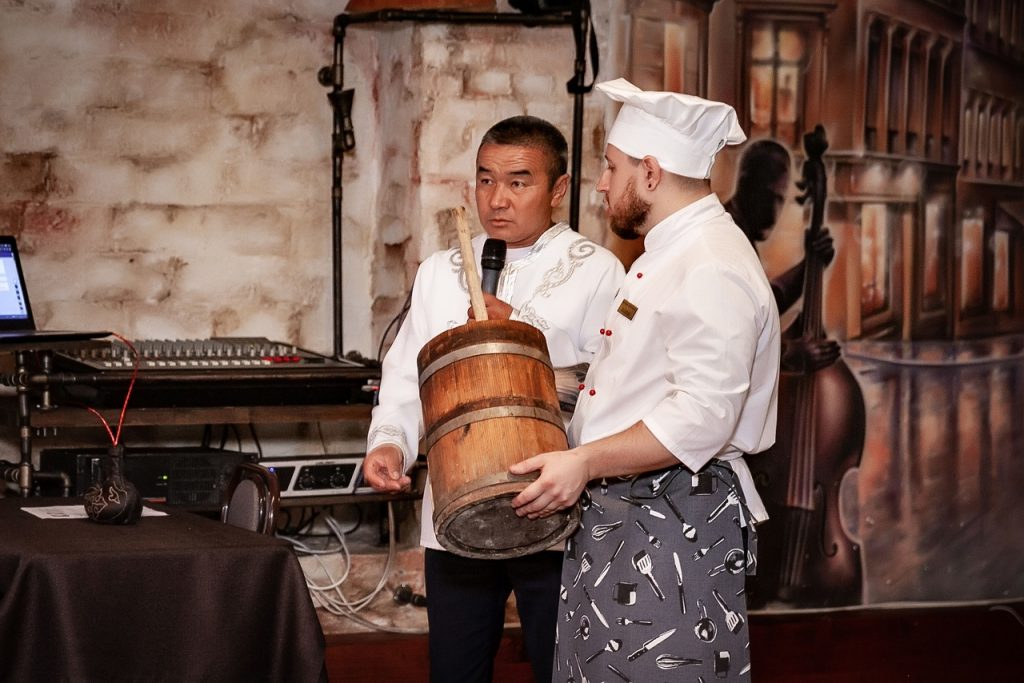 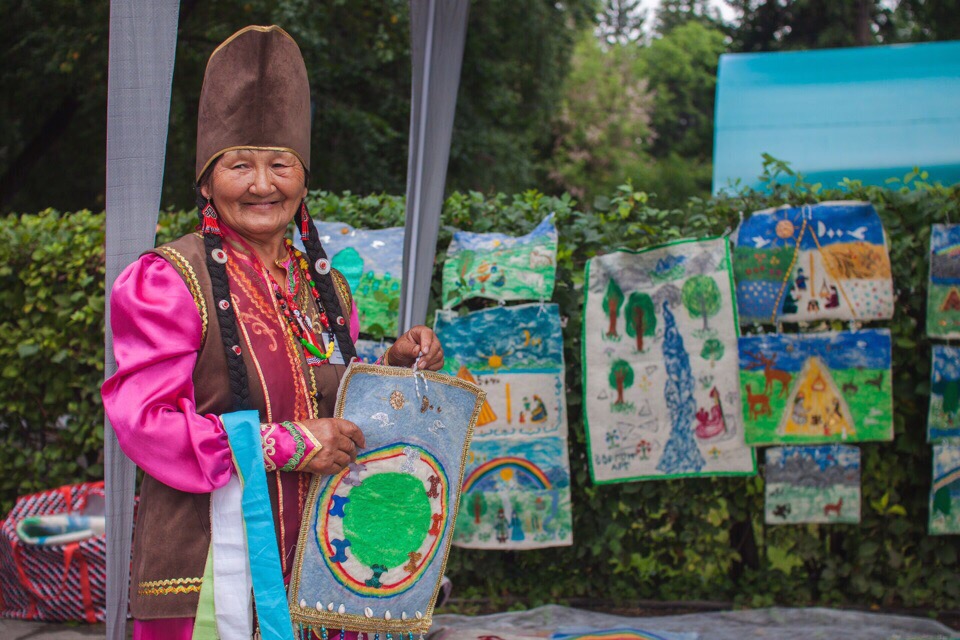 The Handicraft Village was a unique space that showcased the magical world of Altai crafts, folk arts and traditions as a way of preserving the cultural identity of the Altai people. Chasing, jewelry making, felting, embossing, bone and wood carving, saddlery, national costume tailoring, pottery, arts and painting—all the diversity of the crafting traditions of the peoples of the Altai Mountains was on display. 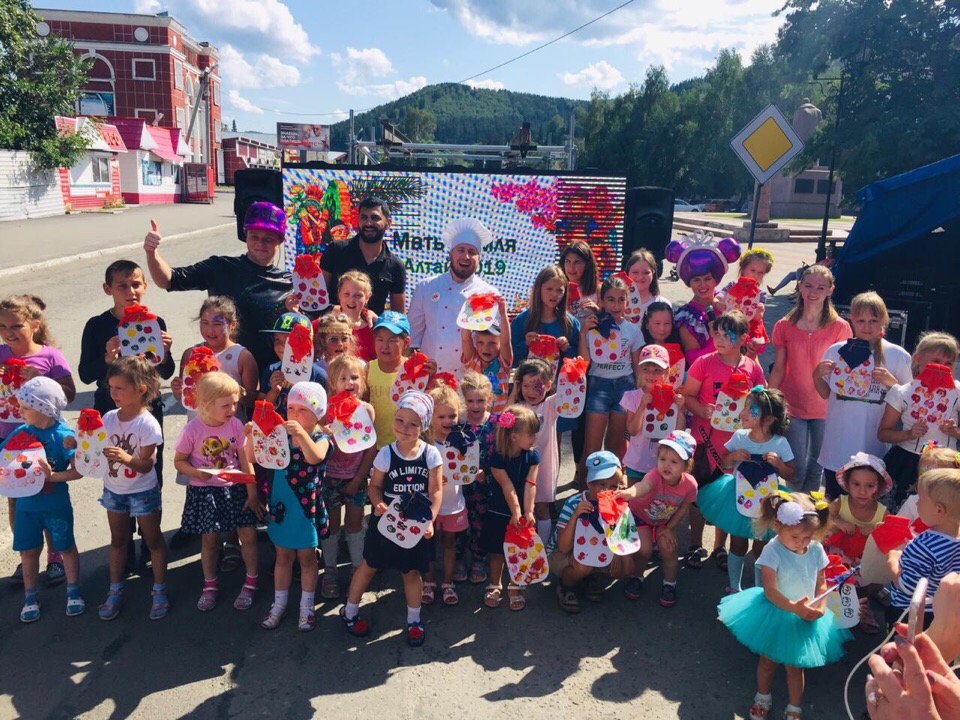 At the Theater of Taste, cooks from the Altai Republic offered a varied menu using ingredients from local farms to over 20,000 visitors. And the festival’s playground was filled with children’s laughter as they cooked snails—the symbol of the Slow Food movement—as well as enjoying drawing activities, exploring the book exhibition, participating in a watercolor masterclass and much more. 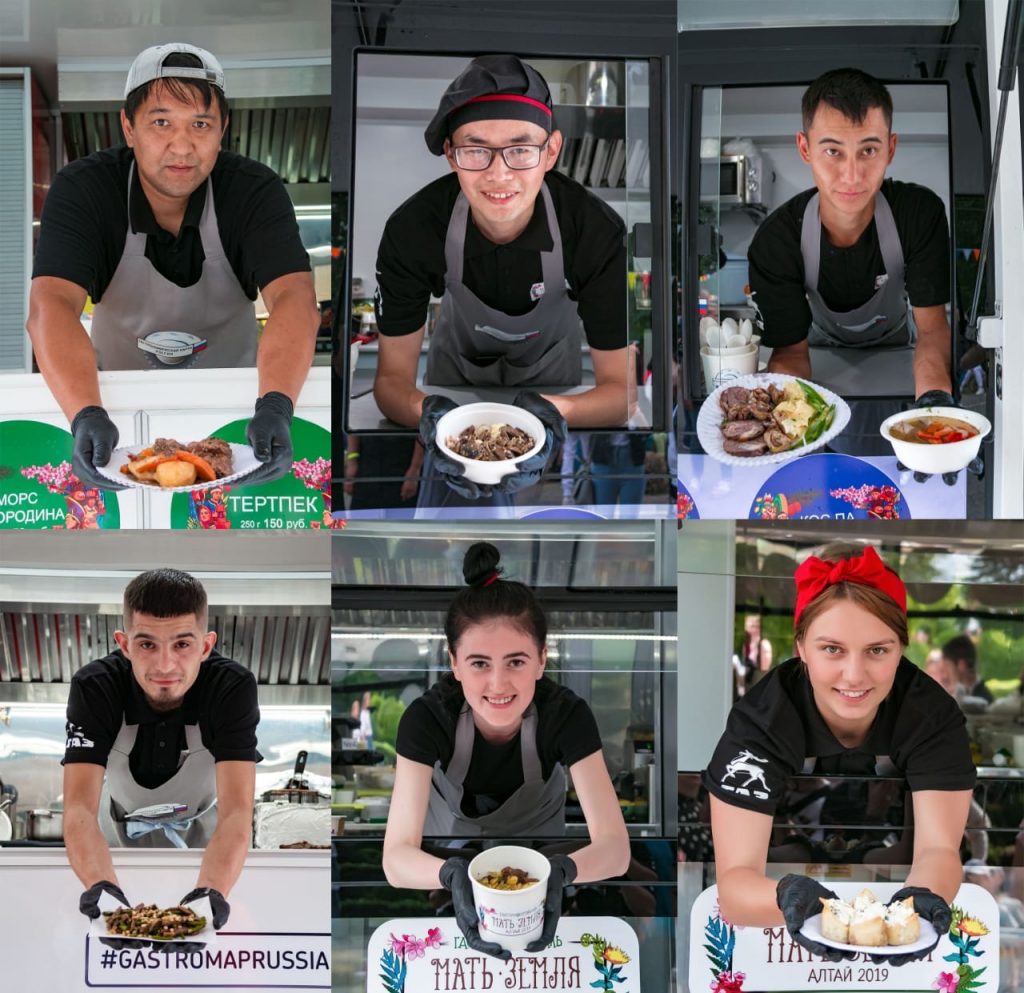 Over two days, more than 42,000 plates of traditional and modern food were served in the Food Tracks of the “Gastronomic Map of Russia” project. A young team of regional cooks, heirs of ancient culinary traditions—each one a representative of the native peoples of the Altai Mountains—presented a menu of dishes from the indigenous cuisine, prepared with local and traditional products. Each cook used the format of “one hand-food,” meaning a portion of food that could fit in the palm of a hand. This proved so popular that the format will continue to be used in restaurants and other venues throughout the region. 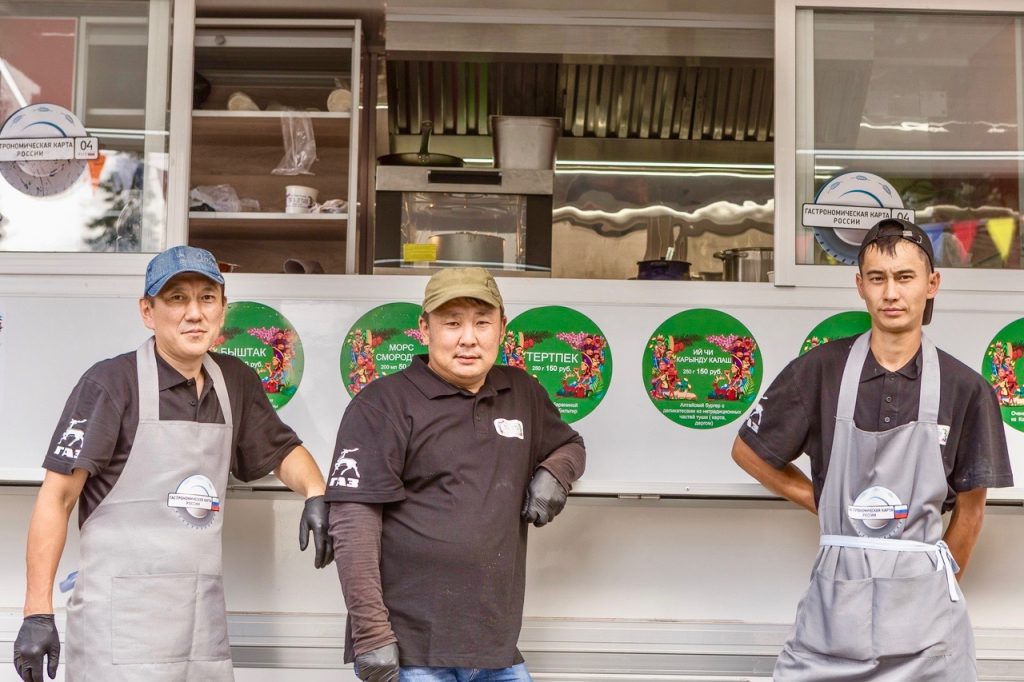 “Behind each dish is a cook and behind each cook is a farmer who has grown a product on the rich Altai land in accordance with the traditions of their ancestors,” said Irbizek Tolkochekov, a cook and one of the coordinators of the Slow Food Community of Indigenous Cooks of Altai. “Food can become a force for the development of our region, and cooks are one of the most powerful engines of this development. With their work, they will act as guarantors of the quality of ingredients and crops, safeguarding places, products and production techniques.”