Slow Food is more than just a way of thinking about food: it is a full-fledged, international movement that supports the efforts of producers, farmers, activists, chefs, organisations, and individuals around the world in the protection of good, clean and fair food. At the core of its mandate since the foundation of its manifesto in 1989, Slow Food has been dedicated to safeguarding and connecting different culinary traditions, their history, and the people behind them.

Undertaking a range of activities aimed at facilitating interaction between different groups of people, in 2018 Slow Food launched a project, and later a book, called “Recipes of Dialogue: Food and Stories for Multiculturalism and Integration”. It has been a project brought to fruition with the support of the Italian Development Cooperation Agency, in partnership with the Region of Piedmont, the City of Turin, civil-society organizations (LVIA, Renken and Colibrì) and diaspora groups (Panafricando and ASBARL). Ninety participants originating from 30 different countries took part in the project, sharing gastronomic techniques and knowledge, as well as their personal stories of migration and the transformative power of food.

It is just one example of how food can bring forth a strong political message: ingredients and recipes have travelled around the world for hundreds of years and many products we now think of as characteristic of a certain place were in fact brought from one place to another by humans. In this way, food and migration are closely linked. Unlike people, however, food knows fewer barriers, becoming a natural outlet for dialogue and cultural exchange. One of the most emblematic stories among the testimonials collected in the scope of this project is undoubtedly that of Igor Stojanovic: a Serbian Roma cook based in Italy whose life is a tangible  example of how food can be used as an effective political tool to break down cultural barriers and build bridges towards integration.

“My family came to Italy for political reasons when I was six; we initially lived in a Roma camp, but thanks to my father’s network of contacts, we were able to leave soon after. If my father‘s political activism in Yugoslavia allowed me to deepen my understanding of the reality linked to the migratory flows of foreigners, my mother and grandmother’s abilities in the kitchen triggered my culinary creativity. This double path is probably what made me become a cook as well as a cultural mediator for a local charity that protects Roma and Sinti rights.”

Like many cuisines, Roma cuisine evokes a journey: it is the culinary expression of a nomadic people formed through India, then the Middle East and finally Europe, enriching itself along the way. It is difficult to define its primary essence, as it has been reworked from many different gastronomic traditions over time. Given the geographical dispersion and the division of the Roma population into different groups, we cannot refer to a singular cuisine, but rather about several different Romany approaches to food, each with its own culinary traditions and signature dishes.

At the fourth edition of the International Festival of Mediterranean Cooking in Turin this past September, Igor explained that it would be impossible for his personal story to not be influenced by the interconnecting ideals of Slow Food, which bring together the different aspects of food – political, social, environmental – and their implications.

“Like many other youngsters, before I really knew Slow Food, I paid less attention to the origin of the products I put on the table; I was negligent about reading ingredient labels, as well as information on their provenance. Thanks to some high school professors, I started to focus on the quality of the food that was provided at the canteen (school cafeteria) and from that moment on, it became clearer to me that the culinary background I belonged to was naturally linked with the importance of good, clean and fair food.”

As his interest in Slow Food principles has deepened, Igor had incorporated them into his daily life and interactions, from supporting farmers to spreading the Slow Food philosophy among members of his community

“At local level, my activism is to support local farmers and artisans, rather than large multinationals, that exploit the workforce of the farmers by underpaying their work. So, I prefer to pay more for what I eat, for the collective good, for the environment. Beyond my family, I try to convey the philosophy of good, clean and fair food to my Serbian Roma community. So, I try to evoke our gastronomy, with seasonal and local food. My aim is to set up culinary workshops right inside the Roma camps, to convey to them how important the consumption of good and healthy food is for everyone.

For more information on the “Recipes of Dialogue” project, visit: https://www.slowfood.com/migrant-stories/

This year we are celebrating 30 years since the signing of the Slow Food Manifesto, a moment that marked a turning point in the organization’s history. To mark the occasion, we have launched the international campaign 30 Years of the Slow Food Manifesto – Our Food, Our Planet, Our Future, which looks back at the successes and forward to the future challenges that await us.

Celebrate with us! Support Slow Food by making a donation and by taking part in an event closest to you. 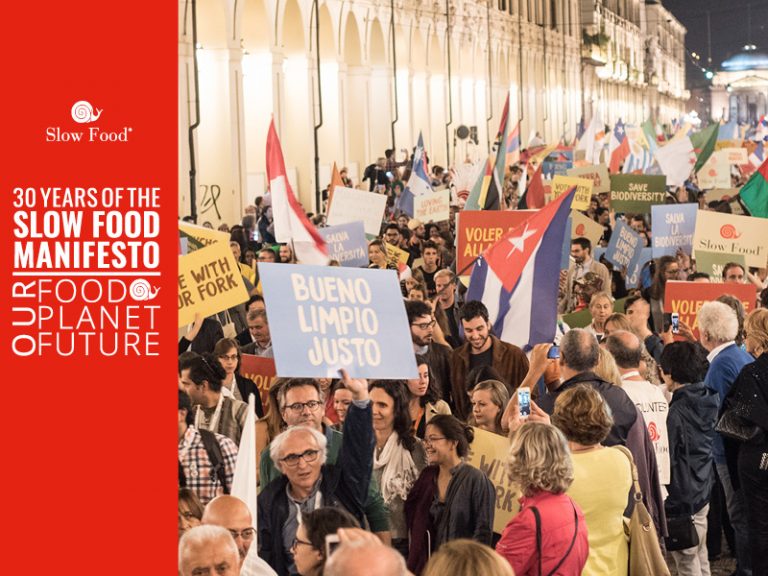